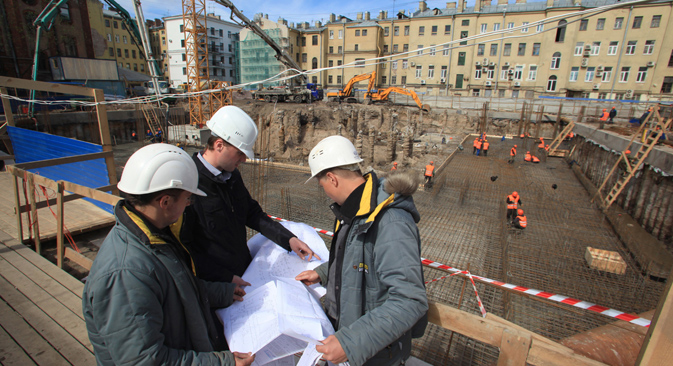 Russia needs more foreign specialists, experts have concluded. According to statistics, the number of skilled expats in Russia is growing but there is still a shortage of them. Over the past 12 months, the largest number of foreigners were employed in construction and trade.

According to data from the Higher School of Economics, the number of expats in Russia is changing, and not in the country’s interests - after a noticeable boom in the second half of the 2000s, numbers have been declining. Currently, in researchers' estimates, there are no more than 40,000 specialists from countries outside the former Soviet Union working in Russia, which is a record low figure for a country with an emerging economy.

Breakdown of highly qualified specialists by sector, data for 2013:

- construction – 35.7 percent of the total number of work permits issued;

A recent crackdown on foreign-funded NGOs and the closure of a number of bilateral programs between Russia and Western countries, as well as current tensions between Russia and the West over Ukraine, have resulted in a number of Westerners leaving the country over the last year or two. Yet it appears that many more are comfortable in Russia and have no plans to leave.

An employee of a major foreign bank has told RBTH that they have many expats working in their Moscow office and they are all feeling comfortable, despite the current climate. "Usually they leave when there are internal reshuffles and movement of staff, otherwise none of them has expressed the desire to return to their native countries," the source said.

Of course, specialists come to Russia not only from the West, but from all over the world, including Asia, Latin America and the Middle East.

Researchers have discovered that attitudes among the expat community toward Russia are equally diverse and include those who are convinced that Russians are inherently aggressive and corrupt and there is nothing one can do about it.

“There are also pragmatics who are interested only in money. But what is important is that there is also a large group of people who have come here with a sincere desire to be of use. It is they who could give us a new impetus for development," said Vladimir Karacharovsky, senior lecturer at the Higher School of Economics' department of economics, in an interview with Ogonyok magazine.

In the opinion of experts, the expats who are the most apprehensive about Russia are those who did not choose to come here themselves but were transferred or invited by transnational companies.

"They do not have a personal interest in the country, whereas quite a different attitude is displayed by enthusiasts, by active expats, who have deliberately chosen Russia as their place of work, who are interested not only in the company that employs them but also in the country itself and the environment they live in,” said Yelena Danilova, head of the department of theoretical analysis of social transformations at the Institute of Sociology under the Russian Academy of Sciences.

“However, Russia's migration policy towards exactly this category of expats is rather restrictive: the state is going out of its way to show to them that they are suspicious. Political risks affect them the most," she added.

Russian Federal Migration Service (FMS) officials have told RBTH that over the past two to three years, the authorities have been trying to make it easier for highly qualified foreign specialists to come to Russia. However, specialists like these can come only on an invitation from a company; they cannot use the simplified procedure if they are coming by themselves. At the same time, when leaving the company that invited them, they do not have to leave the country and can get the necessary permits to stay, albeit on different conditions.

Ovsei Shkaratan, a sociologist and a professor with the Higher School of Economics, is convinced that at the moment foreign experts are indispensable for Russia’s labor market and that this situation will change only in 10-20 years' time.

Related: Life after the orphanage

"In the 1960s, we had a qualitative leap and we were capable of performing the majority of complex tasks ourselves and therefore there was simply no need in foreign experts,” said Shkaratan, “whereas now, after the brain drain of the late 1990s, it turns out that we are unable to produce certain types of equipment. That is why we need foreigners. To restore balance, we shall have to wait till today's students develop into a new generation of specialists."

Shkaratan added that before the 1917 revolution, Russia employed numerous foreign experts, including those serving as governors and other senior officials, which was only of benefit to the Russian economy and politics.