Cossacks in the 21st century: A loyal pillar of Russian society 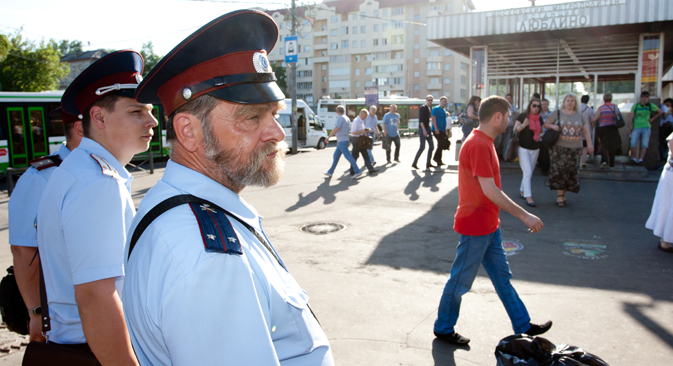 The name of the Cossacks is known all over the world, but very few beyond Russia’s borders know much about this traditional group or what it stands for. RBTH explores the modern-day Cossack community in the hope of dispelling a few myths.

Cossacks feature regularly in controversial or sensationalist news reports in Russia. Suffice it to recall the incident in Sochi when Cossacks in uniform whipped members of Pussy Riot in the street, or more recent reports on some news websites alleging that Cossacks are responsible for the kidnapping of OSCE observers in eastern Ukraine.

According to Regional Development Ministry data for 2013, there are 11 Cossack hosts in Russia, numbering 506,000 people in total.

There are military units in the Russian army formed of Cossacks and then there are Cossacks, on horseback and in parade uniforms, telling TV cameras that they will be maintaining law and order in the streets of Moscow.

Yet very few people truly understand who Cossacks are. Are they an ethnic group, or a class, or a type of civil servants?

Spontaneous democrats, loyal to the state

There are several million Cossacks living on Russian territory today. It is impossible to give a more accurate estimate because the criteria as to who can be classed as a Cossack are unclear. And how do you distinguish a real Cossack from a phoney one?

"All you need to do is to ask where they are from,” says Nikolai Dyakonov, deputy ataman of the Don Cossack Host, who lives in Rostov-on-Don. “A real Cossack will always tell you which family he is from and which stanitsa (Cossack settlement) his ancestors hail from."

In stanitsas which are predominantly populated by Cossacks, men elect a leader, or ataman at a general gathering called a krug (Rus: circle) and decide who will be responsible for what.

They form musical collectives performing Cossack songs and dances. They excel in horseback riding. They bring up the young according to their traditional values. And they maintain law and order, patrol the streets on rotation, quickly gather together if something happens.

Overall, the Cossack community is like a civil society, except that it accepts not everybody but only those who share a certain culture. This culture implies knowledge of Russian history and Cossacks' role in it, respect for Cossack traditions, the Russian Orthodox faith, a love of freedom, and loyalty to the state that paradoxically follows from this.

In 1992, following a presidential decree, Cossacks began to be put on a special list, a so-called register, which qualified them for providing services to state institutions. However, not all Cossacks agreed to be entered on the register: Many have set up their own independent associations, while others have not set up or joined anything - they just live according to their traditions. As far as the state is concerned, however, Cossacks are those who have been put on that special register.

To sing, and dance and put out a fire

"A host consists of primary Cossack societies, which are formed themselves through association," explains Vasily Solovyov, deputy ataman of the Southeast district Cossack society. When not dressed in a Cossack uniform, he looks like an ordinary office worker.

The headquarters of his society, situated on the outskirts of Moscow, looks like an office, except that all of the walls are covered in diplomas and photographs of Cossacks in uniform, in the saddle, in formation, embracing each other.

Moscow turned into a Cossack village for one day

Solovyov explains: In order to enter state service, Cossacks do everything the usual way, i.e. they convene a krug, adopt their charter, elect an ataman. Then they go to the authorities and get registered. From that moment on, they can officially wear uniforms, have ranks and perform services for the state.

They do not carry whips or wear papakhi (astrakhan hats), and their uniform looks very much like a regular police uniform, just in another color and slightly stylized. You can see these Cossacks patrolling the streets, acting as security guards at public events or helping police with detaining wrongdoers.

The trick is that while on patrols, Cossacks are unarmed and they do not have the legal right to detain anyone. If they witness a crime, they stop the perpetrators and call the police. All these actions are regulated by a contract that Cossacks sign with state structures, be it the police, or the Emergencies Ministry, or a military unit. They provide their services for a fee.

Very often the functions Cossacks perform have nothing to do with military or law-enforcement agencies. They help rescuers to put out fires, clear the rubble after earthquakes and floods, and search for people who get lost in forests. In the army, there are whole military units made up of Cossacks and headed by atamans.

They are often engaged in so-called patriotic upbringing: They hold meetings with children and teenagers, tell them about history or teach them to ride. As part of their traditional cultural life, Cossacks organize massive festivities, with singing and dancing and competitions in trick riding.

Cossack societies are united into 11 large hosts, each based in a different part of Russia. There are also Cossack communities outside Russia: in North and South America, in Europe, in Australia, and even in Africa.

Faith, freedom, and a sawed-off shotgun

Ataman Sergei Shishkin, a cheerful, energetic man with a large belly, is entering the headquarters of the Moscow-based Cossack society Southeast. He is showing me around his office. There are flags, weapons and books everywhere. On the desk is a leather-bound edition of "History of the Russian State" by the prominent 18th-century Russian historian Nikolai Karamzin. And there is a real sawed-off shotgun on the windowsill.

Video: Cossack culture through the prism of hip hop

The sawed-off shotgun is a large caliber one: If you fire it for real, it can tear a person into pieces.

"Everybody thinks it's real!” laughs the ataman. “It’s loaded with rubber bullets. It’s been converted into a non-lethal one. But psychologically it works!"

"Fired from this one, a rubber bullet can kill too."

"Sure!” he agrees with a smile. “I’ve shot more than one person dead."

This is a joke. In fact, Sergei Shishkin is a businessman and a municipal council member. The majority of Cossacks have very peaceful professions and livelihoods. Of course, Shishkin has not killed anyone. But he could, should the need arise.

"A Cossack is a person loyal to Russia, to the state and a Russian Orthodox believer. A Cossack is a consolidating force in our society, you see?" he tells me.

"A real Cossack respects traditions,” says Nikolai, quite a modern-looking middle-aged man. “The whole of Cossack philosophy is based on three tenets: faith, freedom, and combat brotherhood."