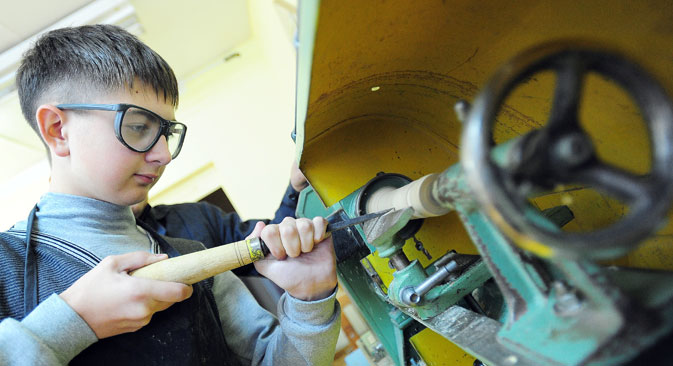 The park currently has 25 workshops where 40 different professions are taught to children from 5 to 14 years old. Source: ITAR-TASS

This spring saw the Moscow opening of Masterslavl, an educational park for children. At the park, kids can try out 40 different professions, including actor, garbage collector, doctor or bank employee. In the future, up to 150 different jobs will be available.

Yet another new city has recently sprung up within the boundaries of Moscow – but this is a city with a difference. The city of Masterslavl is populated entirely by children. Here the jobs of drivers, bank tellers, and actors are all done by people under the age of 14.

In fact, Masterslavl isa specially-designed educational park, where young Russians can earn and spend money, try out various occupations, and even acquire citizenship.

Masterslavl has been made to look like a real city, with houses, a hospital and a bank. The park currently has 25 workshops where 40 different professions are taught to children from 5 to 14 years old. This is only a part of the space.

The park’s management is preparing to open a larger area, and then up to 150 jobs will be offered. The children can see what it's like to be a doctor, janitor, garbage sorter, or a cash-in-transit security guard. They can get a driver's license and use a microscope.

The entrance to the park of professional creativity is through a mock subway car, where they give instructions and hand out "talents" - the local currency. These talents can be spent in the city on training. Children have to pay for some professions, and for others they can earn.

VIDEO: Masterslavl, the best place for kids to choose a future profession

The garbage sorting teacher is waiting for a group of children who are studying environmental professions. This course was created to celebrate the birthday of one of the visitors.

The instructor says that she doesn't have a degree in ecology, but she has worked with children at summer camps before, so has this basic experience.

"I like working with kids. Here they will learn a lot, it is very interesting for them," the young woman explains. "The work isn't very hard, I barely get tired at all."

The "environmentalists" drive up on scooters. They are led to the pavilion, where specialized equipment dumps paper, plastic bottles and cans on the table. Children learn about the importance of separate waste collection and are shown the different kinds of garbage.

Next door they are getting ready to put on a play. The kids learn the importance of dance and music, they are shown how to apply make-up and even dress up in costumes. The kids have fun reading their lines from the stage and receive talents for it.

They can earn talents by working as a janitor, learning how a bank operates (yes, they pay for school, too!), or learning any practical skills, such as folding a tent or sleeping bag.

Dmitry, the manager, explains that they divide the professions into ones that take money and ones that pay money in order to fairly distribute them to those who want to learn a particular skill.

There are even mechanics and a race track where children can get to drive for the first time. It's just like in the real world. First they need to pass a medical examination, then they learn how an engine works, and only then do they get to sit behind the wheel of a child-size electric car.

We weren't able to peek in at the doctors, we could only watch as girls who had learned to swaddle babies were walking down the street with dolls.

On average, children spend several hours at Masterslavl and don't always have time to try everything that interests them, so the park has introduced a system of citizenship.

Ona child's second visit, they can apply for residency at the city's passport office, and on the fourth visit, after paying city taxes they can receive a Masterslavl passport.

Nobody has the right to strip a Masterslavl resident of his citizenship, although for repeated serious violations of the laws, the city government can forbid the offender from residing in the city for a certain period of time and take away some rights and benefits.

Currently no more than 300 childrencan study professions at the same time. When the second phase of the park is opened, the capacity will be more than three times higher.

Masterslavl is not unique – similar parks have opened all over the world. The most well-known of them is KidZania, which has 15 parks. Latin America has its own job-themed parks called Divercity.

Meanwhile, Beirut has Park Kidzmondo and in Ho Chi Minh City in Vietnam there is Kizciti. In Europe, there is a Mini-Munich in Germany, and Madrid and Vienna have Micropolix and Minopolis, respectively.