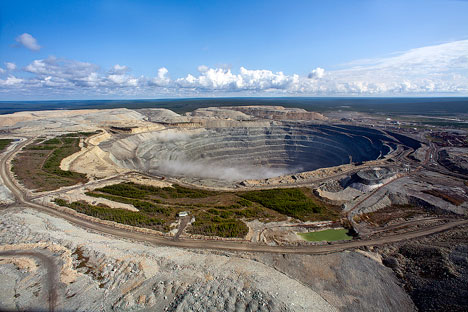 For the second year in a row, Russia’s Alrosa was the leader in diamond extraction, and its share in global diamond extraction is estimated at 28 percent. RBTH’s Evgeniya Nikolaeva went to the city of Udachny (lucky in English) to see for herself how diamonds are mined.

At present, Alrosa’s principal processing facilities are mainly concentrated in Western Yakutia and the Arkhangelsk region, as well as in Africa – in Angola and Botswana. In total, the company is developing 22 deposits. In October 2013, the company held a successful IPO on the Moscow Stock Exchange, during the course of which 16 percent of the company’s shares were sold. This raised about $1.3 billion.

The city of Udachny is located in the north of Siberia about 10.5 miles from the Arctic Circle. Today it is one of the major northern diamond-mining cities. During the Soviet era, large cities were built around major factories called city-makers. Life in Udachny began in 1954, when Soviet geologist Larissa Popugaeva opened a kimberlite pipe nearby.

The marketing system is built on the signing of long-term contracts with companies that produce diamonds and diamond jewelry. The company’s sales organizations have offices in all of the major global diamond centers, including in the United States, Belgium, the UAE, China, the UK, and Israel.

The first phase of the Udachny underground mine is likely to be launched this month, with construction already reaching the final stage. According to the director of the Udachny Mining and Processing Division, Alexander Makhrachev, the company has high hopes for this mine.

“If we currently extract 132 tons of ore a year, then next year – with the launch of the mine – the planned volume is 480 tons.  The mine can be worked on for a long time – the projected capacity of the field is calculated at 60 years and proven reserves already total 159 million tons,” he added.

The technological process for diamond extraction is as follows: geologists determine where to dig and rock is dynamited clearing the horizon. Then drillers begin their work. Special underground dump trucks take the rock, hauling the ore to the bunker from which ore is transferred to the surface and sent to a processing plant. In 2013, more than 4,891,500 karats were extracted here. Identified diamonds are sent to a workshop where they are washed free of impurities by chemical substances. Next the diamonds await a journey of a distance of more than 310 miles to the capital of the Russian Diamond Region – Mirny. This is the sorting center where diamonds are separated into groups by purity and size. After this they are sent to the Alrosa Unified Sales Organization where they will be prepared for sale to clients.

As of today, the company has signed about 40 long-term contracts. “Between 2015 and 2017, most likely, we will increase the number of contracts to 50, but we will make our choices very carefully based not only on the financial documentation of the client but also on our previous experiences in working with them and their purchase volumes during periods of a weakened market,” says Evgeniya Kozenko, an Alrosa official. In 2012, Alrosa also signed a long term contract with the Belgian company Laurelton Diamonds Inc., which purchases diamonds for the American jewelry company Tiffany & Co.

In May 2013, the Russian company and the auction house Sotheby’s signed a memorandum on cooperation. According to its conditions, Alrosa can supply large premium-class diamonds produced by the company’s subsidiary Alrosa Diamonds, as well as jewelry with these diamonds, to Sotheby’s auctions.

The highest quality diamonds go to the company’s jewelry subsidiary Alrosa Diamonds; however the jewelry business is not a priority for the company. According to Evgeniya Kozenko, in accordance with the company’s development strategy, all business development efforts are focused on diamond mining.

“Alrosa’s development strategy stipulates concentration on the core business – diamond mining. Alrosa is a mining company and does not plan to develop its jewellery business at this point. But the company does cooperate with many jewelry houses,” she says.