Arts world up in arms as Russia bans swearwords in films, books and TV 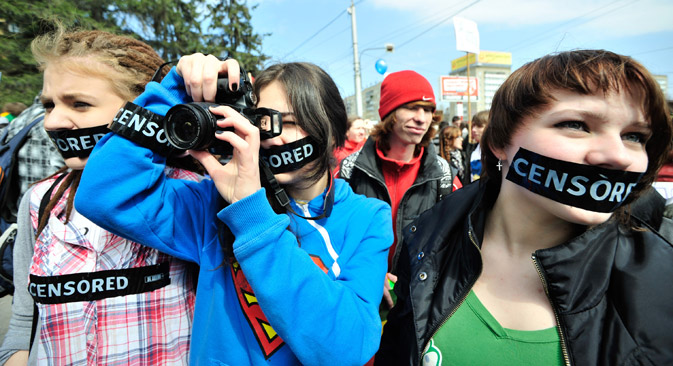 'The law is for the people, and not people for the law,' says Nikita Mikhalkov. Source: Elnar Salahiev / RIA Novosti

A law making it illegal to use swearwords in television, movies, literature, media reporting, concerts, and theatrical productions entered into force on July 1. Violators will face stiff fines. Prominent figures have expressed their dismay over the ban, arguing that it will limit cultural expression.

Russia’s arts community has expressed its dissatisfaction with new legislation outlawing the use of profanity in cultural works and productions, which came into force on July 1.   According to the law, fines will be imposed on “the public performance of works of literature, art, or creativity that contain obscene language.” Profanity is also banned “during screenings of films, theatrical productions, at the opening of exhibitions, concerts, shows, etc.” An “independent board” will define what it considers to be vulgar language.

A law for the people, not people for the law

“The law is for the people, and not people for the law. It seems they need to make some kind of adjustment to it and consider the issue with cursing in each individual case, particularly with film. In the case that it’s a film about war, it’s impossible to imagine it without profanity,” Mikhalkov told RIA Novosti.  The president of the Moscow International Film Festival added that in the future, the festival’s organizers will seek opportunities to show films at the festival that have not yet received distribution certificates from the Russian Ministry of Culture.

“Mat [Russian profanity] is one of the great sophisticated inventions of the Russian people. There’s disgusting mat, when people speak it on the train, but there’s also mat as a means of expressing extreme human conditions – pain, war, attack, death – and that is justified by the situation. I believe these are things that need to be negotiated in each particular case,” Mikhalkov stressed.

Sergei Shnurov, the flamboyant frontman of Russian rock group Leningrad, expressed his opinion on the ban on profane language, which is an integral component of his songs, at a concert in Moscow in the run-up to the introduction of the new law. “This country is on the brink of a new cold war. Clearly, the authorities need ‘mobilization,’” Shnurov said. Asked how it is possible to deprive people of their innermost expressions, the artist said, “You can’t decide things for people.”

Meanwhile, Russian poet and doctor of philosophical sciences Igor Volgin does not think the law will cause any fundamental changes in literature and art.

“Nothing will particularly change. Mat is a phenomenon of speech, it’s not public. Russian culture has managed perfectly fine without profanity. Yes, Pushkin and Lermontov and other poets had poetry that used profanity, but all of this was a marginal culture outside of the public space,” Volgin told RBTH.    In the poet’s opinion, the new prohibition on obscene language will serve as a “red rag to a bull,” and talentless artists will bring attention to their work through the prism of “protest.”

“I’ve always said that we don’t need to save literature from mat, but mat from literature. Words with vulgar language become bourgeois and vulgar in the blink of an eye. Nobody ever got it in their head to bring that all into the public space earlier. There has always been self-censorship and an internal cultural ban on the part of the writer and the artist. It’s a really bad thing that we need to place a taboo on mat at the legislative level now,” said Volgin.

A hefty fine for cursing

IThe fine for offensive language ranges from 2,000 to 2,500 rubles ($60-$80) for individual citizens, from 4,000 to 4,500 rubles ($130-$170) for officials, and from 40,000 to 50,000 rubles ($1,300-$1,700) for legal entities. The same fines apply for the use of mat in media reports. If there is a repeat offense, the penalty increases.
With the new law, printed and audiovisual work that contains mat can only be sold in special packaging with a warning label. If a film contains vulgar language, it cannot be issued a distribution certificate, and movies without certification are fined. The law does not apply to products that were released before the law entered into force.