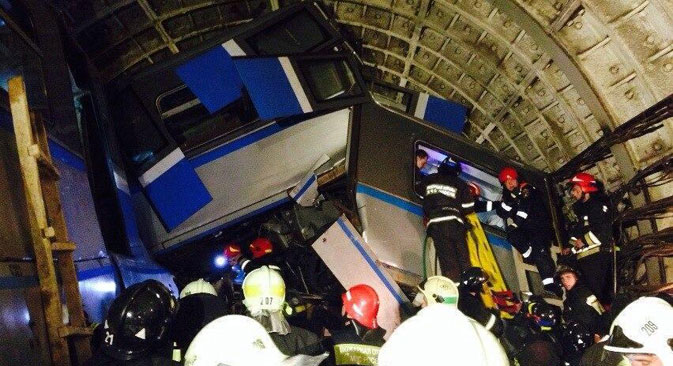 Three train cars derailed in the tunnel between the Park Pobedy and Slavyansky Bulvar stations in western Moscow.

At least 21 people have been killed and 160 injured in the Moscow metro accident which occurred on Tuesday morning.

The train came off the rails on the Park Pobedy - Slavyansky Bulvar stretch of the Arbatsko-Pokrovskaya, or the so-called 'dark blue', line at about 8.30 a.m. on Tuesday. One of the carriages was badly damaged.

Moscow Mayor Sergei Sobyanin said mourning would be observed in Moscow on Wednesday for the victims of the accident.

"Wednesday will be a day of mourning in Moscow, given the scope of the tragedy," he said.

Sobyanin vowed that those responsible for the accident would be punished or face criminal prosecution, after the cause of the accident is established.

"A thorough investigation will be followed by dismissals and criminal inquiries against those responsible for this tragedy," Sobyanin said at the scene of the accident.

Russian President Vladimir Putin and the U.S. embassy to Russia expressed their condolences over the accident.

According to Sobyanin, the aftermath would take a couple of days to deal with. A bus service will be launched to transport passengers.

Meanwhile, a source with Moscow’s emergency services told Interfax that 66 buses had been assigned for the transportation of passengers.

Rescuers have evacuated over 1,150 people from the stretch of line where the accident occurred, a spokesman for the Emergency Situations Ministry's Moscow department said. Some 161 people have sought medical assistance and 127 have been admitted to hospitals, he said.

"About 150 units of different equipment and around 160 rescuers have been operating on site," Moscow Deputy Mayor Pyotr Biryukov told reporters.

No children died in the accident, the deputy mayor said, refusing to comment on whether the death toll could grow.

Rescuers reacted promptly to the emergency report and arrived to the scene 17 minutes after the signal came, Biryukov said.

Three helicopters of the Russian Emergency Situations Ministry have been transporting Moscow metro passengers hurt in the accident to a hospital, the ministry's spokesman Alexander Drobyshevsky said.

"The Moscow mayor provided a detailed account of the metro accident, and spoke about the inquiry into the accident and measures being taken to deal with the aftermath and to aid the victims," Peskov told Interfax on Tuesday.

The emergency situations, interior and health ministers informed Putin about the work being done by their ministries in connection with the accident.

"The president instructed Investigative Committee head [Alexander] Bastrykin to carry out an investigation and to open criminal cases in connection with the fatalities in the metro accident," Peskov said.

Investigators will consider different theories for the catastrophe in the Moscow metro, in particular a carriage defect, Investigative Committee spokesman Vladimir Markin said.

"We are considering the possibility of carriage defect and all other possibilities which will emerge during the investigation," Markin said.

However, the theory of a terrorist attack has been ruled out and what happened was an accident, Markin said.

Suspects in regard to the train derailment in the Moscow metro will emerge soon, Markin said.

"The necessary tests have been ordered and people, including [power company] Mosenergo employees, have been questioned. I do not rule out that suspects will emerge soon," he said. "According to the preliminary information, the possibility of a power spike has not been confirmed, we will check," Markin said.

Due to the serious consequences of the accident, a criminal case over the incident in the Moscow metro will be launched by the central office of the Investigative Committee, Markin said.

This is not the first major metro accident in Moscow over the past year.

In January 2014, a tunnel between the Avtozavodskaya and Kolomenskaya stations of the Zamoskvoretsky or so-called ‘green’ line was punctured with a construction pole.

Train services stopped on the Zamoskvoretsky line due to the incident, the metro press office told Interfax.

Another major incident occurred last June because of a malfunctioning train on the Serpukhovsko-Timiryazevskaya, or the so-called ‘grey’, line. Two people were taken to hospital then, with 11 people injured in total.

Another accident occurred on the Sokolnicheskaya, or the so-called ‘red’, line on the stretch between the Okhotny Ryad and Biblioteka Imeni Lenina stations during the morning rush hour. A high-voltage electric cable caught fire, forcing the evacuation of up to 4,500 people from these two subway stations. Eighty-nine people were injured in the June 5 emergency. Of them, 27 were admitted to hospitals.