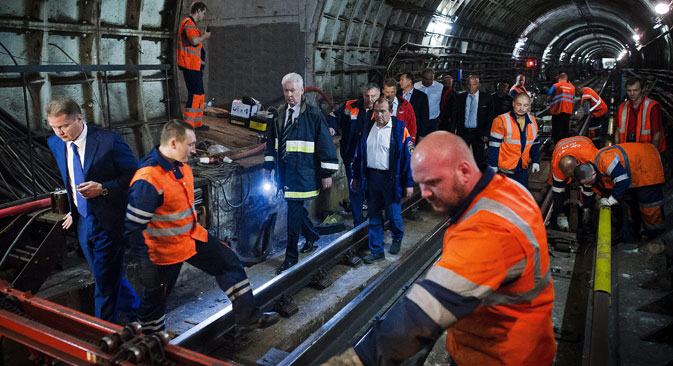 Experts working at the scene of the Moscow metro disaster believe that the cause of the accident was not a malfunction of the switch mechanism, as previously believed, but a foreign object underneath the train, Russian newspaper Kommersant reported on July 17.

New details are emerging of the possible causes of the deadly accident on the Moscow metro, which took place during morning rush hour on Tuesday, July 15.

A Moscow metro train crashed between the Park Pobedy and Slavyansky Bulvar stations on the Arbatsko-Pokrovskaya Line, in western Moscow. Three cars derailed, and the doors of the first one were jammed shut. The most serious technical catastrophe in the Moscow metro’s history, the disaster resulted in 23 deaths, with more than 200 people gravely injured.

According to the Kommersant daily, specialists have already identified fresh chipping on the concrete between the rails, which indicates that a foreign object fell underneath the train and may have caused it to fly off the tracks.

Deputy Mayor of Moscow Pyotr Biryukov, however, attributed the wreck to “a broken railway switch.” Later, he added that he did not rule out a version blaming “metal fatigue,” faulty cars, and “outside influence.” He promised to present the commission’s first conclusions on Friday.

Biryukov said that the “cars involved in the accident, as well as the tracks on this section, underwent a complete routine diagnosis as envisaged by the metro’s operating standards.” The Emergency Situations Ministry’s original theory that a power surge caused the train to come to a sudden halt has not been confirmed. One potential cause already being considered is a faulty railway switch in the area where the tragedy occurred.

According to the newspaper Izvestiya, one of the experts – Konstantin Matveyev, the CEO of construction company Mosinzhproekt, which is building new stations for the city’s metro network – believes that while it is a serious offense, a faulty railway switch may not be the cause of the accident. An absence of wheel tracks on the railway switch provides evidence in favor of his theory.

Meanwhile, Leonid Baranov, a leading scientist at the Moscow State University of Railway Engineering, thinks that the theory involving a foreign object underneath the train deserves closer scrutiny. “I thought of several other versions after examining the scene, but first we need to think through and analyze all of them,” the specialist said. According to Baranov, railway engineering specialists have already been invited to inspect the evidence and express their own opinions.

According to the investigation, work has been under way since the end of May to lay tracks and switches on the stretch of line between Park Pobedy and Slavyansky Bulvar, with the aim of connecting the Arbatsko-Pokrovskaya Line with sections on the Kalininskaya Line that are currently under construction.

“Bashkatov and Gordov were directly involved in the switch-laying work, as well as oversight of its fulfillment. The investigation believes that the work was performed improperly. The switching mechanism was held in place by a regular three-millimeter-wide wire, which broke,” the investigative committee said in a statement.

The detainees have already been questioned, and the investigation plans to take restrictive measures against them in the near future.

“At this point, the suspects are people who were directly involved in performing the work,” read the statement, which went on to say that the investigative committee intends to establish and institute criminal proceedings against “absolutely everyone involved in this tragedy, starting with the perpetrators and ending with the top officials who should have overseen and ensured full compliance with the Moscow metro’s transport safety requirements.”

According to the newspaper Izvestiya, the police have suspicions regarding the suspects’ supervisors, as well as the subcontractors and assemblers who installed the switch itself. When work was being performed, they may have exerted pressure on the specialists to sign a certificate of acceptance for the device without performing an outside inspection. As a result, the switch was held in place by a wire, which could have caused the train to crash.

“A wire can be used to avoid untwisting threaded connections. It’s simply impossible to wrap a switch with a wire. After all, any engineer understands what the consequences could be,” said Vasily Shelyakov, spokesman for the Professional Metro Workers Union. According to him, the subcontractor had indeed failed to fix the switching mechanism into place, although he believes the version of events involving the wire also needs to be looked into.