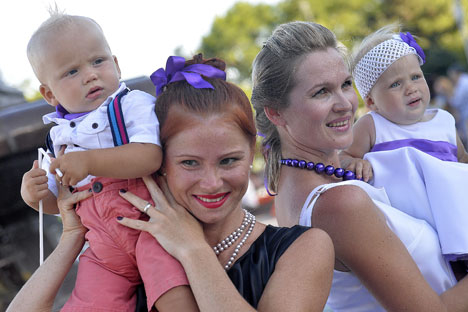 Most Russians assert that they strive towards a healthy, close-knit family and marriage for life. However, sociologists point to research indicating that in reality, Russia's citizenry behaves otherwise, engaging in infidelity, divorce, and homosexuality.

In early June, the Russian government presented a report entitled “Conception of State Family Policy for the Period up to 2025”. The document pointed to the crisis in the Russian family in the late 1990s and early 2000s, citing the effects of low fertility rates, the prevalence of divorce, and the weakness of family ties. The government's new policy seeks to remedy this situation.

At first glance, ordinary Russians appear to understand the role and meaning of the family in the same way that politicians do. The newly published policy concept describes traditional family values as the government understands them: marriage for the purpose of bearing and raising children on the basis of mutual respect among all family members.

Russia’s Public Opinion Research Center (VTSIOM) conducted a survey in March 2012, the results of which showed that 93 percent of Russians consider their primary goal to be to start a family and raise good children.

The Zircon Research Group carried out a similar study in July and August 2013, finding that almost half of Russians (43 percent) view the ideal family as requiring formal lifelong marriage: a full family with a mother, father, and children, ruled by love, mutual understanding, and respect for elders.

However, the reality is far from the ideal: Only 11 percent of respondents believe that their own families live up to these parameters.

Leonty Byzov, sociologist and head of VTSIOM's Analytical Department, is certain that people only pay lip service to the government's family policy, which has no influence on their own behavior.

“In reality, Russians practice precisely that which they strongly condemn: They divorce, cheat on their spouses, and engage in homosexual behavior,” the sociologist said.

Starting in the 1990s, the family values of Russian youth underwent drastic changes during Russia's sexual and feminist revolution, said Tatyana Gurko, doctor of social sciences and section head of family sociology at the Russian Academy of Sciences' Institute of Sociology, in an interview with Gazeta.ru. Those same processes of feminism and sexual revolution began to take hold in the United States and Europe 30 years earlier, in the 1960s.

“During the past decade, the family values of young people have been starting to exclude an expectation of lifelong marriage. The new generation, including those with children of their own, has loyalties that lie with successive marriages, children out of wedlock, cohabitation with unmarried partners, and even infidelity,” Gurko said.

According to her, today’s Russian youth does not believe that “every woman should become a mother” and also welcomes equality in relations between partners.

Families in large and small cities

Russia has a high number of marriages, divorces, and remarriages, in contrast with European countries, where both marriages and divorces are few, and Muslim countries, which have many marriages but few divorces.

In recent years, however, the rate of early marriage (from 18-24 years of age) among Russians has halved, Gurko told Gazeta.ru. According to Gurko, in 1980, 62 percent of young men and 68 percent of young women married early, figures which fell to a respective 29 percent and 44 percent in 2011. Most young people now delay marriage until the ages of 25-34.

Having children out of marriage is also a phenomenon with an ethnic and regional character; it is more common in Siberia and the Urals. According to census data, children born out of wedlock account for 68 percent of births in the Republic of Tuva (along the border with Mongolia) and 56 percent of births in the Koryak Autonomous Area (in the Kamchatka Territory in the Far East).

According to Gurko, the new generation of youth in large cities adopts infantile modes of behavior, continuing to live with their parents even after graduating from university.

“As a result, they do not develop a feeling of responsibility for their partner and their own children. Families in large Russian cities more and more resort to private services for childcare, elder care, and housework,” the expert said.

Byzov added that Russian society today is fractured and atomized, with the majority of people having few social ties.

“The circle of loved ones has narrowed to exclude all but parents and children. Aunts, uncles, grandparents, and great-grandparents are often not included. The real social values of Russians are at odds with their espoused values. In place of family values, we frequently see values of personal growth, success, career, and one's own welfare,” the expert explained.

This article contains material from Gazeta.ru.