Moscow scientist: There has been a turning point in battle against Ebola 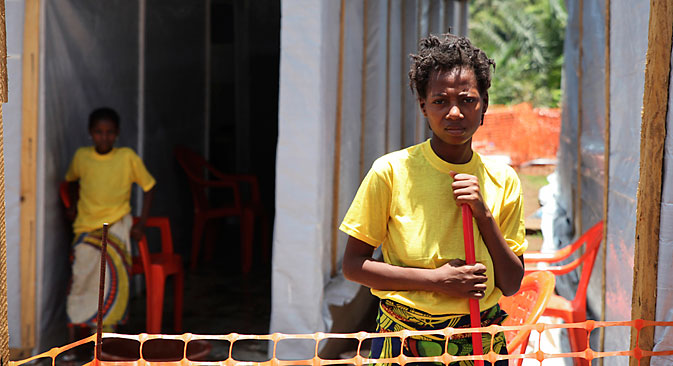 An Ebola outbreak in 2014 has already taken 900 lives. Source: Reuters

Although the number of people infected with Ebola fever in West Africa continues to grow and it is nearly impossible to control the spread of the virus, in recent days it has been possible to improve the situation, a leading Russian expert in virology told RBTH in an interview.

Alarm continues to grow at the spread of the deadly Ebola virus in the West African countries of Liberia, Guinea and Sierra Leone, with 889 confirmed dead as of August 4.

Mikhail Shchelkanov of the Ivanovsky Institute of Virology in Moscowand Russia’s chief infectious disease specialist, Viktor Maleyev, were sent to Guinea in early August to help fight the epidemic, and they will be there for several more weeks. RBTH interviewed Shchelkanov about the conditions in the area and how the epidemic could be stopped.

RBTH: What are the current epidemiological conditions in the region?

Shchelkanov: While in the past only the most difficult cases were tracked, now, thanks to earlier diagnosis, infected people are coming to doctors’ attention sooner. As a result, the mortality rate from Ebola is falling [usually 90 percent, it is now around 50 percent – RBTH].

Diagnosis at the Donka Hospital in Conakry [the largest public hospital in the country – RBTH] is done quite well, and not least because the labs are overseen by a graduate of the Russian university system. Dr. Maga graduated from the Moscow State Academy of Veterinary Medicine [where research is conducted on the diagnosis of viral infections, some of which, particularly Ebola, spread from animals to people – RBTH].

RBTH: What precisely are you doing in Guinea?

Shchelkanov: First of all, we’re providing scientific and methodological assistance to local specialists. In particular, we’re helping to improve the diagnosis of the virus. I think our collaboration has helped.

Second, we’re consulting with local specialists on the Ebola virus [the virus has been studied in Russia – RBTH].

We were also at one of the tent hospitals, where we consulted with doctors on clinical issues and issues about hemorrhagic fevers — clinical approaches to treating such fevers are more or less universal. And since Russia has seen Crimean hemorrhagic fever, for example, we have suitable experience.

Another one of our tasks is to guarantee the safety of Russian citizens and embassy workers.

RBTH: In your opinion, how can the epidemic be stopped?

Shchelkanov: This is complicated for two fundamental reasons. First, the infection is zoonotic [meaning it can be passed between animals and humans]. It’s virtually impossible to control the circulation of viruses in hot spots in the wooded [countries of] Guinea, Sierra Leone and Liberia.

The second fundamental reason lies in the socioeconomic conditions of these countries. West Africa is one of the poorest territories [in the world]. There are no sanitary and epidemiological services as we know them.

Then add to that the administrative failure of many West African countries and the rampant corruption, which does not make it possible to even appropriately implement anti-epidemic measures: for $1.50 an infected person can leave a quarantine area.

It’s also important to take into account the particularity of the local beliefs, in particular, burials of the dead of a whole village, in which the dead person is embraced before being laid in the grave. This sort of thing makes it hard to quickly curtail the epidemic.

But I’d like to note that measures have nevertheless started to be implemented. For example, at the Donka Hospital all the casualties are required to be cremated at the hospital and are not released to relatives.

Specific measures following the guidelines of Guinea’s Health Ministry and the World Health Organization are being taken. In addition, the governments of West Africa have finally understood that they do not need to hide the number of infected people. There has been a turning point literally in the last few days.

RBTH: The school year is starting soon in Russia, and Guinean students will be returning to study there. How can the risk of the virus spreading be minimized?

Shchelkanov: This issue hasn’t yet been resolved, but the experience of the Rusal company is instructive: Before sending its employees to Russia, it has been sending them first to Casablanca (Morocco) for three weeks.

The employees work remotely there and only after the end of the incubation period [around three weeks – RBTH] do they return to Russia. I don’t know if something similar will be done for the students, but most likely not because this hinges on money.

RBTH: Does this mean that Russia will stop admitting citizens of dangerous regions?

Shchelkanov: This is unlikely, but their health will be monitored. When students arrive in Russia, they will be tracked for the first month or two. I don’t yet know how, but it will be entirely rigorous.

As of August 4, 889 infected people have died. The mortality rate is around 50 percent, which is much lower than in past epidemics, when this figure reached 90 percent. Due to the number of inflicted people — according to the latest data, approximately 1,800 — this outbreak is the biggest since the virus appeared in 1976.

In addition to Liberia, Guinea and Sierra Leone, cases have been reported in Nigeria and Hong Kong. There is not yet an effective vaccine against Ebola; consequently, a number of researchers worry that the Ebola virus could be used as a biological weapon.

RBTH thanks the Russian Embassy in Guinea for assistance in organizing the interview.