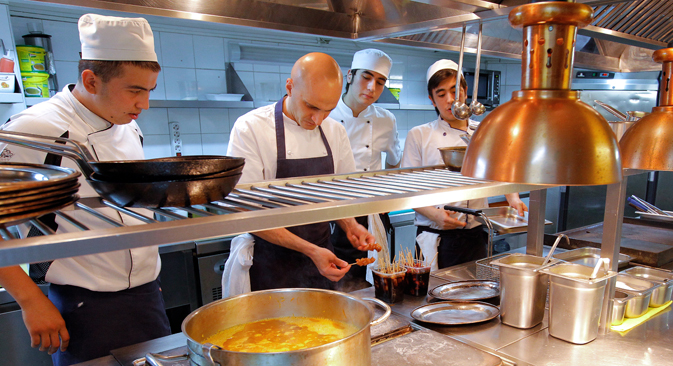 While many establishments will not need to readapt their business because they have already changed to domestic products, others relied on primary products that have no equivalents in Russia. RBTH finds out how the restaurant business has reacted to the sanctions.

After Russia recently imposed a food embargo against the EU, the U.S., Canada, Australia and Norway in response to U.S. and European sanctions over the situation in Ukraine, Russian citizens are now facing having to do without imported milk and dairy products, including cheese, beef, pork, vegetables, fruits, eggs, fish, crustaceans, mollusks and other water invertebrates.

While it was clear immediately that such a ban would have a serious effect on the lives of many Russians, restaurants will have it hardest of all. The head chefs and managers of sophisticated dining establishments are now wondering how they will make do without the imports. For those specializing in Italian and Russian cuisine, it will not be so difficult since cheese and vegetables can be replaced rather easily.

Head chef and restaurateur Valentino Bontemli says that he has already seen mozzarella in Russia, and naturally meat, flour and eggs can also be found.

"In this sense, Italian cuisine is very fortunate,” says Bontemli. “Besides seafood and Parmesan, Russia has practically all the necessary ingredients. Sure, these products are not of the same quality as in Italy, but what can you do? Chefs will have to be more creative," he says.

Aram Mnatsakanov, owner of Probka Family, is convinced that he will be able to feed his customers. "Restaurateurs live in a concrete reality. We'll feed our customers with the products available on the Russian market. Whatever we earn, we'll be happy with it. I am old, these sanctions don't frighten me," he says.

Meanwhile, Alexander Kozhin, manager of the Café De Marko chain, believes that the sanctions will not be a big problem for restaurateurs. "We mainly work with domestic products. We won't change our menu," he states. "For now we have everything we need."

There are those who are even happy about the ban. "Restaurateurs will have it even better because imported products are unfortunately all filled with pesticides and antibiotics," says restaurant owner Sergei Osintsev.

"In our restaurant we try not to buy imported products, that’s why we've been around for 20 years. Everyone knows that our products come from Russian farmers. Also, domestic producers will also benefit from the sanctions. So I welcome them."

Such optimism, however, cannot be found in people in whose restaurants many dishes are created with imported food that cannot be substituted. Tanya Mishina, director of the Sumosan restaurant, says that she is uncertain.

"We don't know now what will happen later, we don't even know if the goods we ordered before the ban will be allowed to enter. We have weekly orders. We cannot work otherwise, we cannot stock up and freeze the products for half a year," she says.

Sumosan, which imports products from Japan and the U.S., faces no problems sourcing the Japanese products it needs, but Mishina says the ban on American products is causing alarm.

“From California, for example, we received oysters, crabs and tuna, whose quality made Sumosan famous. We can't even import the Edamame bean from there because it is considered a root! From the U.S. we can only import Kaiso seaweed, but using a plane to transport only this product is too expensive." Mishina thinks that they will be obliged to use Japanese and South Korean products, yet they cost too much.

"With meat and fowl I won’t have any problems since I haven't bought any foreign meat for a long time,” he says. “It's got nothing to do with the political situation. I just started looking for good quality domestic producers a long time ago, those whose products I can check.”

“However, I heavily rely on nuts, fruits, vegetables and dairy products,” says Shishkin, adding that the ban on products made by Finnish dairy company Valio will be “fatal” for him. He explains that the company produces a ‘Turkish yogurt’ that he had sought for many years and had only recently appeared on sale in Moscow.

“I use it frequently for a range of dishes. It is a fantastic product and now it seems I'll be deprived of it again. I'll have to discard a couple of dishes from the menu. I won’t be able to find substitution on the market. I won't make the yogurt myself. And I don't know what I'll do without Parmesan," he laments.

"Perhaps for Delicatessen the banned goods are not critical, but for Tapa de Comida they are extremely critical. This is a Spanish restaurant that has been suffering for a year from limited supply of Spanish products,” says Shishkin, who fears that they will now have to “extract Spanish flavors from products from other countries.”

“Fortunately pasta products, rice and vegetable oil are not on the list. And I hope they won't be banned. Without olive oil, for example, I don't think my restaurant will be able to function."

Experts say that the embargo will increase prices for foodstuffs. "The cost of products will rise. Consequently some will have to sell them at higher prices and others will have to buy them at those prices, if they can afford them," says Shishkin.

Based on materials from Lenta.ru and The Village.