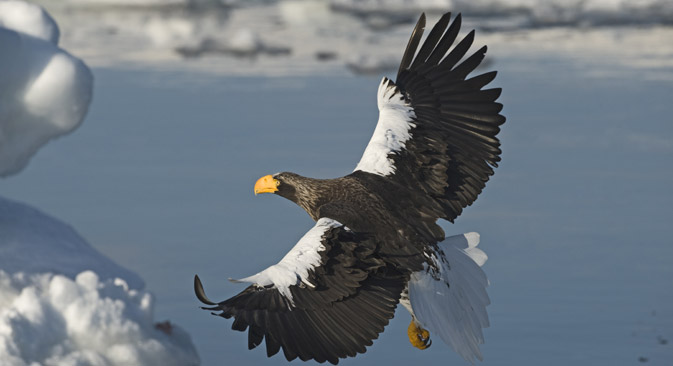 The desman appeared on Earth a little earlier than the mammoth. Source: Minden Pictures / Fotodom

Everyone has heard of the Russian bear, the Siberian tiger and the endangered Amur leopard. But do you know about other creatures that can be found in Russia? RBTH has made a list of 10 indigenous Russian animals, from see-through fish to graceful white cranes.

Animals that only inhabit a certain territory are referred to as endemic species. The Russian desman, the Siberian crane and the Siberian musk deer are just a few of such creatures to be found in Russia. Almost all of the species listed below are listed as endangered, and some are on the verge of extinction.

Area of habitation: the European part of Russia and the Don, Ural and Volga River basins.

The desman appeared on Earth a little earlier than the mammoth. A semiaquatic mammal, this diving insectivore looks like a small mole with a proboscis, a fat tail and tiny beady eyes.

Its tail contains strongly scented musk glands, which are used to strengthen the aroma of perfume, as a result of which the desman is practically on the brink of extinction. Furthermore, its fur is considered more valuable than that of the beaver. 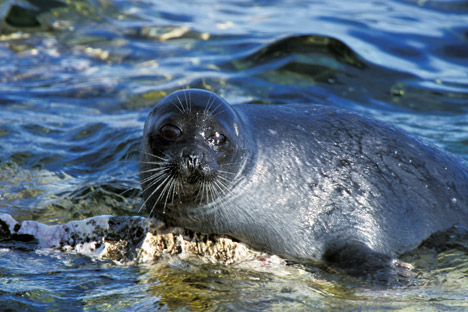 It remains a mystery how the seals originally came to Lake Baikal, hundreds of kilometers from any ocean.. Source: Photoshot / Vostok Photo

Approximate size of population: around 1,000

The ancient people of Lake Baikal considered the nerpa, as the indigenous seal is also called, a divinity. There is a legend that says that Lake Baikal was connected to the Arctic Sea by a channel, which the seals once used for their migration from the northern region. Most likely, however, the freshwater nerpa came to the lake via rivers that existed in the Ice Age.

The nerpa is smaller than its northern cousins and feeds on small Baikal fish. The ancient peoples who settled the area around Lake Baikal revered the nerpa as a god, though there is unfortunately little record of this. 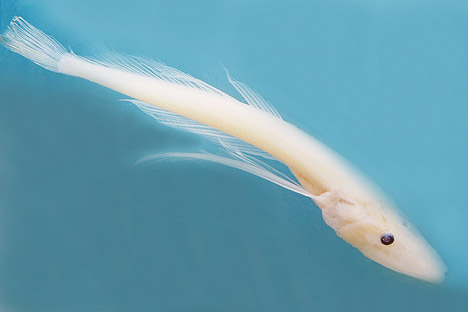 Golomyanka is a primary food source for the Baikal nerpa . Source: Press Photo

The comephorus, or golomyanka in Russian, is the most numerous fish in Lake Baikal, with an overall genus weight of about 150,000 tons (67 percent of the biomass of all the lake's fish). It is completely translucent, has no scales and no swim bladder. Its spine and blood vessels are visible through its skin.

The body of the comephorus consists of at least 35 percent oil. In previous times this oil was used as lamp oil, as well as in Mongolian and Chinese medicine. They say that during WWII the fish helped restore the strength of the wounded. 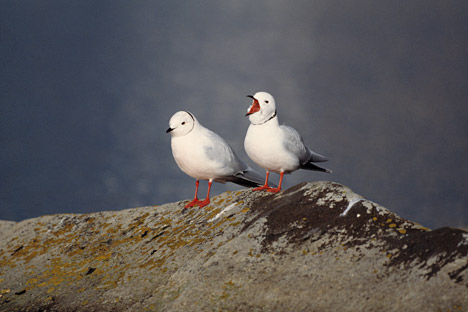 The Pink gull can be found in Siberia. Source: Photoshot / Vostok Photo

Area of habitation: Eastern Siberia; during seasonal migrations and hibernation it can be found on the open waters of the Bering Sea, the Sea of Okhotsk and the Pacific Ocean.

Besides Eastern Siberia, this small graceful seagull can also be found in Western Greenland. It was named after the British explorer James Clark Ross, but in Russia it is called the rozovaya chaika, the Pink gull, because of the light pink hues on its feathers. The relatively small numbers of this species mean that it is rarely spotted by travelers. 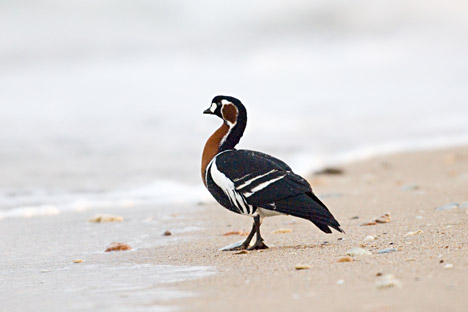 Area of habitation: the Yamal and Taymyr peninsulas, Siberian forested tundra; hibernates on the shores of the Caspian Sea and partly in northern Iraq and Iran.

The red-breasted goose has black, white and red plumage, and nest only in the tundra and forested tundra of Siberia, between the lower reaches of the Ob River and the tributaries of the Khatanga. It prefers high dry areas on the steep sides of river valleys, sloping river shorelines and ravines. The birds form small colonies of several pairs, and always stay away from other types of geese. 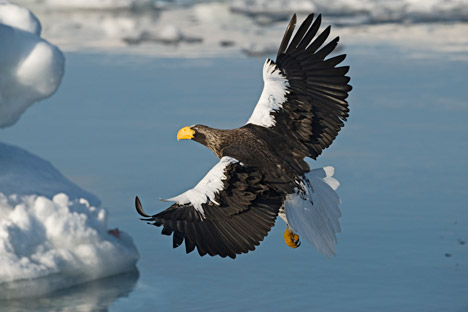 The Steller’s sea eagle is one of the biggest birds in the world. Source: Photoshot / Vostok Photo

Area of habitation: the Kamchatka Peninsula, the coasts of the Sea of Okhotsk. The Steller’s sea eagle only ventures beyond Russian territory during its winter migration.

Approximate size of population: around 2,000 pairs

The Steller’s sea eagle is one of the biggest birds in the world and is surely one of the largest representatives of the Falconiformes order. It cannot be confused with the bald eagle, the symbol of the U.S., because its head is black, and white feathers are found on its tail, claws and the curve of its wings.

Some biologists say that Steller’s sea eagles are caring fathers that remember all their chicks. They are also hunters and strategists with excellent eyesight. 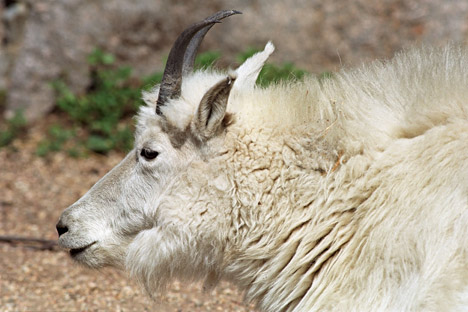 Approximate size of population: about 50,000

The snow sheep is a real inhabitant of Siberia, preferring hills and cliffs that are difficult to reach and rugged mountainsides with plants. Both males and females have horns. Unfortunately, they are considered prize trophies by hunters. 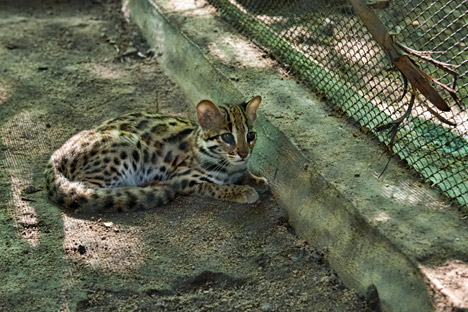 The leopard cat is not adapted to the winter. Source: Alamy / Legion Media

Area of habitation: The Far East, the Amur river basin and the coastline of the Sea of Japan.

The handsome Siberian leopard cat is slightly bigger than a domestic cat, though few hunters are willing to get into a fight with one. Despite living in the remote mountainous forests of the Far East, it is not adapted to the winter and can get around on snow only with difficulty. 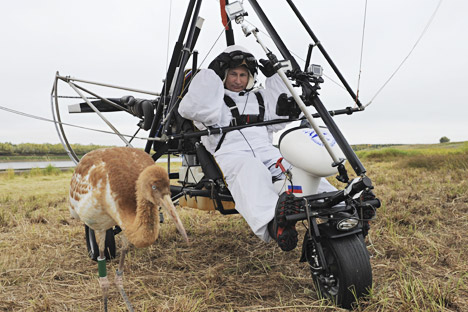 Vladimir Putin in a motorised deltaplane near a crane at Yamalo-Nenets district September 5, 2012. Putin led a flock of cranes on a migration route. Source: Photoshot / Vostock Photo

Area of habitation: south-western Siberia, Yakutia (Republic of Sakha), the Arkhangelsk Region, the Komi Republic and the Yamalo-Nenets Autonomous Area.

Approximate size of population: 3,000. There are only 20 of them remaining in western Siberia.

As the Siberian crane is an endangered species, it is important to teach the young the technique of long-distance flying and air navigation. A method for doing so has been devised in the United States: It consists of having the chicks follow the migration itinerary with the help of a guided hang glider.

In 2012 the Siberian crane entered politics when Russian President Vladimir Putin flew a hang glider leading a flock of cranes. 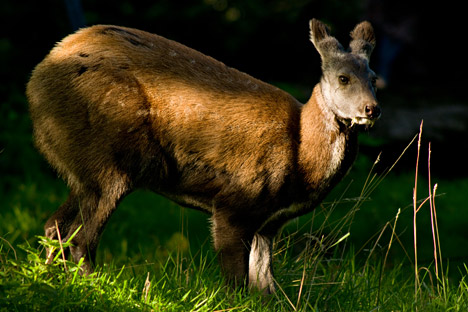 Area of habitation: from the eastern Himalayas and Tibet to eastern Siberia, Korea and Sakhalin, the Amur Region and the Primorsky Territory.

Instead of horns, the deer has twisted fangs protruding from below its upper lip. Musk deer are great jumpers, capable of changing their direction 90 degrees as they run.

The deer is another animal that has a musk scent. Its Latin name, moschus moschiferus, means "giving off musk". This strong scent helps the males attract the females.