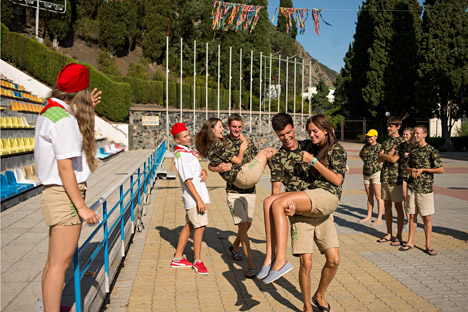 By late 2013 Artek was owed around $1.9 million. Source: Mikhail Mordasov

Every summer tens of thousands of children used to come from all over the world to stay at Artek, the oldest and largest children’s camp in the Soviet Union. But now the Crimean camp has fallen on hard times – this year Artek will accept only a third of the usual number of schoolchildren. RBTH finds out how a lack of finances and the recent political crisis have affected the camp’s fortunes – will new funding be enough to save it?

In 1982, an American schoolgirl from Maine named Samantha Reid Smith wrote a personal letter to General Secretary Yuri Andropov. Frightened by the scary image of the Soviet leader portrayed in the American media during the Cold War, Samantha asked him if he really wanted nuclear war.

In his reply, Andropov assured the child that his plans were peaceful and invited her to visit Artek, the USSR’s most important children's camp. Located in Crimea, in the 70s and 80s the camp welcomed 35,000 Soviet and foreign children annually. Samantha and her family traveled to Moscow, Leningrad, and Artek, and in doing so she served as an ambassador of peace.

Samantha Reid Smith was killed in an aircraft accident in August 1985. Now her name is engraved in Russian in a granite monument situated right at the beginning of an avenue that bears her name at Artek.

Samantha’s story made Artek famous in the United States. In the summer of 1988, 100 American schoolchildren from 20 states visited the camp as winners of an art competition called ‘I Want to Go to Artek’.

Originally founded in 1925 as a tent camp for children suffering from tuberculosis, Artek now sprawls over a territory the size of Monaco. It consists of 210 hectares (519 acres) of land on the southern shore of the Crimean peninsula, near the settlement of Gurzuf, 789 miles (1,270 kilometers) south of Moscow. Half of Artek is beaches and parks, among which lies an entire children's town with its own school, museums, libraries, hospital and soccer stadium.

However, for the last twenty years the camp has been in decline, and it now faces an uncertain future, having become an unwitting victim of geopolitics in the wake of Russia’s takeover of Crimea in March 2014.

This year, Artek stood empty for almost six months. When Crimea was still administered from Kiev, 70 percent of the available vacation places were bought by the government and allotted to Ukrainian students. But now, with the peninsula having been controversially incorporated into Russia’s territory, Kiev has withdrawn funding for the children's center. Consequently, Artek opened only in May, and even then only part of the camp was in use.

A season without foreigners

Furthermore, the camp has been forced to pull the plug on the Let's Change the World for the Better! international program and festival. The event, which hosted delegations from 50 to 70 countries, has been canceled this year for the first time in 12 years.

Nadezhda Burakova, a methodologist from Artek's Department of Educational and International Programs, says that “it became clear that there would be no international program in the upcoming season" back in November 2013, when unrest first began on Kiev’s Independence Square.

"We always wanted children from various countries to be friends. This year we did not try to create any international programs because we found ourselves in a new legal field and we still do not understand how we should proceed," says Burakova.

In early August, Artek's eighth We Have Friends on the Entire Planet program came to an end. Only a few children came from abroad to participate in it. It was a private initiative, organized by Russian-speaking parents from former Soviet countries.

Past glories now a distant memory

The camp’s current predicament is a far cry from the Soviet era, when it hosted the largest children's festival in the world, an event renowned for its international appeal. The camp was seen as a symbol of the USSR Young Pioneers and hosted a plethora of delegations from socialist countries around the world.

Crimea's Artek: What became of the legendary children's summer camp?

Participants brought their national costumes, musical instruments, souvenirs and goodies. In the course of three weeks they would get acquainted with each other's national culture and traditions.

“As you walk through the train, it’s as if you’re traveling the globe. In one compartment you have Austria, in another Hungary, in another Vietnam,” Soviet journalist Victor Kryuchkov wrote back in 1977 about the train that transported participants in the May There Always Be Sunshine international children’s festival from Moscow to Artek.

But like many Soviet state-sponsored institutions, Artek’s problems began when the USSR fell apart at the beginning of the 1990s.

Because of Artek’s lofty status, the Soviet government had spared no expense to maintain it. As a result, the camp’s management never counted its money, so with the collapse of the USSR, Artek began to experience chronic financial difficulties. Financing ceased, the necessary repairs were not made, and employees did not receive their wages.

For the last 12 years the international children's festival has been financed by the All-Ukrainian Charitable Foundation of Hope and Kindness.

Those responsible for the camp tried unsuccessfully to commercialize it in the 1990s and 2000s, but without state support, Artek’s administration found it impossible to maintain the quality that the camp had enjoyed during its Soviet heyday. First Artek ceased to operate year-round, and then, even during peak season, the camp was only filled at three-quarter capacity.

Artek’s problems came to a head in 2009, when the Ukrainian federal budget did not allocate enough funds to maintain the camp. The electricity was shut off, and Artek’s employees went unpaid for months. In protest, Artek’s then-director Boris Novozhilov went on a hunger strike.

Mikhail Bezugly, the head doctor at Artek’s medical center, told RIA Novosti’s Ukrainian correspondent at the time that the camp’s financial issues had to do with the interests “of various individuals and structures who had illegally seized land” belonging to Artek. “Several adults decided that this [land] is too good to belong to children,” Bezugly said, adding that Artek’s land is worth about $100,000 per hundred hectares.

In the end, money was found to cover Artek’s expenses, and the Ukrainian government even began to pay for more than half of the children’s stays at the camp. However, this aid was not aimed at the best schoolchildren, but rather at those in need, particularly large families and orphans.

By late 2013, after further disputes with the government over funding, Artek was owed around $1.9 million.

In June 2014 Alexei Kasprzhak, former Rector of the Moscow Higher School of Economics, became Artek's general director. Kasprzhak was not impressed with what he saw on his arrival at the camp. "The Russian Federation has stricter requirements for the organization of children's vacations than Ukraine,” he said. “The camp's infrastructure does not suit them." 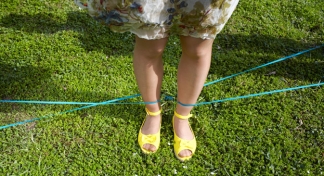 Russia's government has allocated 1 billion rubles ($26.7 million) to be spent before the end of 2014 on the first phases of development and reconstruction of Artek. Vacations for foreign children will be organized on a commercial basis, attracting clients with interesting events and educational programs, such as those dedicated to space exploration, science and ballet, Russia's best-known brands. The camp will also abandon those programs considered to be ineffective in the management's view.

"We will not reintroduce the principles according to which the international camps functioned," Kasprzhak explains. "We must enter the market, we want to be competitive. We want kids to come to Artek not because the government pays for their vacation, but because the camp offers quality services."