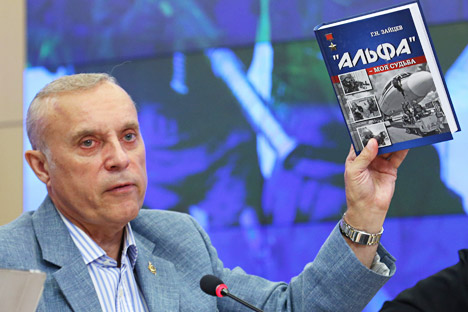 Sergei Goncharov, the head of the association of Alpha Group veterans talks to RIR about what Russia has done to fight terrorism in the past decade and how the battle against terrorists has changed.

Alpha Group, a division of Russia’s Federal Security Service tasked with preventing terrorist attacks, freeing hostages and assisting in other complex operations, is considered one of the world’s most experienced and effective special-purpose units.

RIR: Have the Russian special services had any notable achievements in the fight against terrorism since the Beslan hostage crisis?

Sergei Goncharov: I can’t say that after Beslan there has been a dramatic improvement in all processes in the fight against terrorism in Russia. Terrorism exists, and in the North Caucasus our special-purpose units continue anti-terrorist efforts against rebel groups.

Why are these efforts not receiving much coverage in the media? Because at the moment everything is filled with Ukraine.

However, there are some positive developments too. Do you remember when we won the right to stage the 2014 Winter Olympics in Sochi? The main problem cited by our opponents and political adversaries was that Sochi is situated close to the North Caucasus and they doubted that Russia could ensure the security of the Sochi Olympics.

Our anti-terrorist units that were involved in ensuring security at the Olympics have demonstrated excellent skills and training, and have proven that they are capable of holding events like that. This convinces me that currently we have enough resources and forces to counter the terror threat on Russian soil.

RIR: Which units are currently involved in this work?

S.G.: Russia has a Special-Purpose Center that consists of three units: A — the famous Alpha; V — the famous Vympel; and a special operations unit. It takes the lead in operating in this area of the fight against terrorism. In addition, Russia has special-purpose units with some specialist training, for example for operations in the Arctic, in the mountains, etcetera.

RIR: Which measures have helped to improve the fight against terrorism in Russia over the past 10 years?

S.G.: These include better covert intelligence work. Terrorism cannot be defeated just with force or military action. A victory over terrorists involves, first and foremost, top-class covert intelligence work. Frankly speaking, I don’t think we have reached any high professional level or results of undercover work in the North Caucasus as the specifics of that region are known to all and it is rather hard to work there.

These measures include a strengthening of the units that I have listed. The Special-Purpose Center has been beefed up not only with well-trained professionals but also with equipment and, most importantly, it now has branches operating in practically all Russian regions.

RIR: How would you assess events in Ukraine?

S.G.: Had [ousted Ukrainian President Viktor] Yanukovych chosen a tougher response to the events in Maidan [Kiev’s Independence Square], there would have been no revolution and he would have remained in power.

But he wanted both, as the saying goes, to eat the fish and not to choke on the bones. That is, he wanted to receive guarantees of his personal safety and did not want to be a dictator; he got what he got.

That is why I think that when dispersing the [opposition] protest in Moscow’s Bolotnaya Square [in early 2012], our police acted within known limits. Their actions were appropriate and timely.

RIR: What influence will the events in Ukraine have on the Russian special-purpose forces?

S.G.: There are local wars under way all over the world in which special forces are taking part. That is why all the countries of the world, including us, are focused on developing them. This is what the Americans are doing; this is what we are doing. This is what the British and the French are doing. That is why the special units destroyed under [former Russian Defense Minister Anatoly] Serdyukov will be revived. In the future, we shall have the same special-purpose forces as the Americans have. These forces will be involved in the fight against terrorism, too.

RIR: How would you assess the fight against extremism in Russia?

S.G.: In terms of the operative work being done by the Interior Ministry and the Federal Security Service, it is quite successful in terms of prevention, too. If an individual is arousing suspicions of the secret services with his or her calls for a change of power, for overthrowing the constitutional regime, they are invited for a chat or, at least, they are given a warning.

We are unable to cover the huge niche that is the Internet and all that technology stuff that exists in the world these days. Not only is it us: No one has been successful here. Otherwise, one should follow the Chinese example: Ban everything and then perhaps something will work out. But we are not ready for that.

RIR: Is it necessary to control the Internet?

S.G.: Everything can be found on the Internet, from how to make an improvised bomb to how to prepare a sniper’s nest. All that is out there, on the Internet. That is why all these sites should be banned.

RIR: Why wasn’t it done before?

S.G.: I think that previously we were not ready to do it from the technical point of view. And it is a step in the right direction.

RIR: Why are we still fighting terrorists?

S.G.: The biggest problem today is that terrorism has become a business.

It is not just murder, it is also a business, with a turnover of billions of dollars. People began to make money on terrorism. If previously they were driven by an idea, now they are driven by money.

Take Syria, for example. Some 500 militants from the North Caucasus are fighting there for money for the one side, while other militants are fighting for money too, for the other side. There is no idea [ideology], just a mercenary calculation.