Delineating borders: The symbolism of the fence in Russia 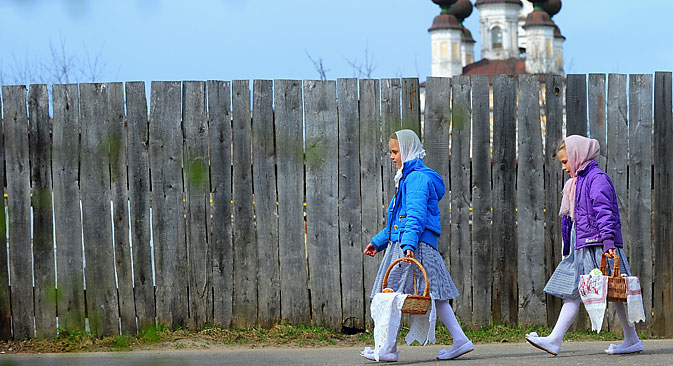 The fence, an attempt to limit that endless Russian space. Source: ITAR-TASS

Sergei Medvedev, Professor of the Applied Political Science Department at the Higher School of Economics National Research University, is studying the phenomenology of fences. In the course of his work he has observed that Russians love to close themselves off: They build fences, erect barriers, and hang thick curtains on their windows. Medvedev believes that historical and cultural reasons lie at the root of this behavior.

For a very long time fences in Russia have served not only as protection from an external threat, but also to keep the population disciplined. However, the Russian fence is rather unreliable: It always has a hole. It therefore protects people more psychologically than physically. Windows in Russian homes are traditionally decorated by two or three rows of curtains and tulle, and windows are covered by grilles even on the third floor.

In Europe there is none of this: You can walk down the street and see the life of every family (how they watch television, how they come out into the kitchen) – people have no idea what curtains are. This is the idea of a transparent society in which people trust each other.

The idea of a complete fence makes society introverted, thereby increasing its expenditure on the promotion of security. Guards and watchmen are people removed from productive labor for the sake of observing a ritual.

In the West, the first precept of urbanism is the transparency of urban space. In Moscow there are barriers everywhere, starting with window grilles and ending with ‘killer’ metro doors and tinted windows on cars. In the Moscow conservatory's Great Hall, where there are three exit doors, only one will always be open. And this is decided not by some colonel in the Federal Security Service, but by the janitor. People must walk in a line, they must "seep out." It is here that we see the relationship of power to space on a macro- and microphysical level. Both the Russian president and a babushka who opens and closes doors think the same way in this case.

Why there are so many fences in Russia

There are several reasons for Russia's fence phenomenon. First, Russia is a country in which certain groups of people seize resources and hinder others who seek to reach them. Fences help them reproduce this order. Secondly, fences are an indicator of the level of mistrust that people have of one another. The level of suspicion has increased since Soviet times. Thirty years ago you could ask your neighbor to pick up your child from school, a child could return home from the metro late at night – now such things are unthinkable. This is the social anomy that leads to such a proliferation of fences.

In his book Institutional Economics for Dummies, Russian economist Alexander Auzan writes that he has invented a new way of measuring social capital - the height of fences. In the book he recounts how his friend told him about having constructed a house to an English design. Yet it turned out that he had surrounded his four-story house with a granite wall. In England such a building would have been a psychiatric clinic or a prison, says Auzan. The same thing occurs with those who move abroad: If you see a high fence somewhere in Cyprus or Spain, you can be in no doubt that Russians live behind it.

Thirdly, this is an issue of personal property. The guarantees for personal property in Russia are weak. Every businessman is afraid that at any moment his business will be ‘squeezed out of him’ if someone, for example, takes a liking to it. The only property holder in the country is the government; everyone else is just a temporary administrator appointed by that government. It is a continuation of the Soviet mentality. Owning property is always conditional, which is what leads to the paranoia of the fence.

Finally, the fence is a certain attempt to limit, to give some form to that endless Russian space. The fence is needed to restrict the spreading of all kinds of flows, of any kind of movement afar.

As the American sociologist Manuel Castells points out, a global bifurcation is currently taking place. People are now starting to free themselves of borders – social, informational, financial - but some still want to create barriers. What is happening in Russia in respect to Putin's policy and the Crimea story is the appearance of new fences. Now borders are being created with Ukraine; a new curtain is being closed to the West. And in this sense Russia is not alone: There is the same enormous border between Israel and Palestine, between the U.S. and Mexico. Fences will never disappear. They will always be with us.

How can we escape this? We need to make urban conditions more open. In Germany the Reichstag is an open glass dome, where you can go and watch the deputies. The Russian Duma is a closed, cordoned-off space. A bored tourist cannot simply go in and watch the deputies making decisions and casting votes. Now if in its place a space could be created with glass walls, surrounded by nature, and if it were unnecessary to close off half the city’s streets in order for a minister to pass… that would be a different way of thinking.

The Kremlin should also finally become simply a museum. It should be always open, so that any time of day or night it is possible to take a walk around its parks, museums and cathedrals. It should not be a monastery, closed to outsiders – it should become a happy, open and friendly space.