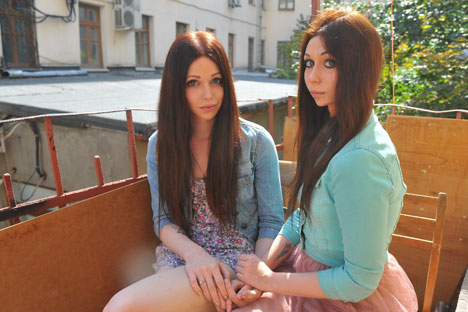 Alina and Alisa did not originally plan to attract a lot of attention to themselves and create a media event out of their wedding. Source: All photos from personal archive

A psychoanalyst tells RIR that the controversial Moscow wedding characterizes the gradual break-up of patriarchal society and the erosion of traditional gender roles.

It has now been a week since a marriage between two “brides” was registered at the Kutozovsky Civil Registry Office in Moscow. The two girls looked incredibly like each other. However, according to the passport presented, one of them was biologically a twenty-three year old young man named Dmitry. He describes himself as an androgyne, a person who can be described neither as male nor female.

Russian legislation, which has traditionally been hostile in its relationship toward representatives of the LGBT community, was unable to refuse in this case: The couple getting married was technically a man and a woman, which means there was no formal basis for refusing to register their marriage.

The wedding was something of a scandal, with staff at the civil registry office telling the groom to “become a real man,” but the marriage between Dmitry, known on social networking sites as Alina Davis, and Alisa was registered nevertheless and the story of the event has subsequently been a subject of great controversy on the Russian internet.

Under fire from traditionalists

The reaction from conservative quarters was predictably negative. In an interview on Gazeta.ru, ‘Alina’ talked about how the pair has been “threatened constantly” since the moment of their marriage because, according to their critics, people like them are “ruining the country.”

But, according to the newlyweds, the threats are exclusively of an anonymous nature. On her VKontakte page, Alina posted a message in which she criticized Russian society for showing excessive interest in a phenomenon which is, in her opinion, absolutely normal.

“I am thinking more and more that such heightened interest in our wedding is the manifestation of a sick society. Really, what happened is normal. We got married because are in love. We came because we felt it was necessary. There was nothing freakish or indecent. And coming in a wedding dress is normal if I consider myself a girl,” wrote Alina.

Earlier on the same page, she had written that she “does not consider herself a man” and that she is psychologically female. Alina linked this to the idea that “girls are prettier than boys” and since “he” likes girls it was logical and correct for “him” to become one of them, thereby getting closer to his ideal.

In a conversation with RIR, Alina said that she and Alisa did not originally plan to attract a lot of attention to themselves and create a media event out of their wedding, but at the same time it was of upmost importance for them to do exactly as they saw fit; for example, both came in wedding gowns, the act which caused such a stir in the press.

Also, according to Alina, “in real life it is much more positive than negative when interacting with people. On the internet there is mostly negativity emanating from anonymous authors, although there are some words of support.” She is certain that their case is far from anomalous: “Many androgynes date girls but few people know about it. In Russia most people think that “if he goes around like a woman, then he’s gay”. He hopes that pairs like them will follow their example and also decide to legalize their relationships.

Psychoanalyst Marina Klyashtornaya, commenting on the situation for RIR, described the event as rather characteristic for our time. In Klyashtornaya’s opinion, the western world today, which Russia belongs to in part, is undergoing the gradual break up of the patriarchal model along with changes in traditional gender functions. This changing paradigm can find its expression in the growth of families in which the woman is the breadwinner, in various forms of male and female homosexuality, and in more complicated situations like adrogynism and transsexualism where a heterosexual man presents himself and acts like a woman.

Northern Europe and the U.S. have gone significantly farther down this road, and tolerance to gender preference has become generally accepted over the past few decades. The breakdown of the patriarchal world in Russia has begun later and for now such events like a “wedding of two brides” are still considered shocking.

“This is the issue of our times,” says Klyashtornaya. “After some time, such things will also become commonplace for Russia.” However, she notes that there is an important caveat: Since Russia is not unconditionally part of the Western world, but a country uniting within itself both the European and the Asian cultural traditions, it is completely possible that the disintegration of the patriarchal world will come about slower than in the West, and accordingly, ideas about the gender roles of women and men being indisputable and not up for discussion will persist for a long time.