Going back to the Land 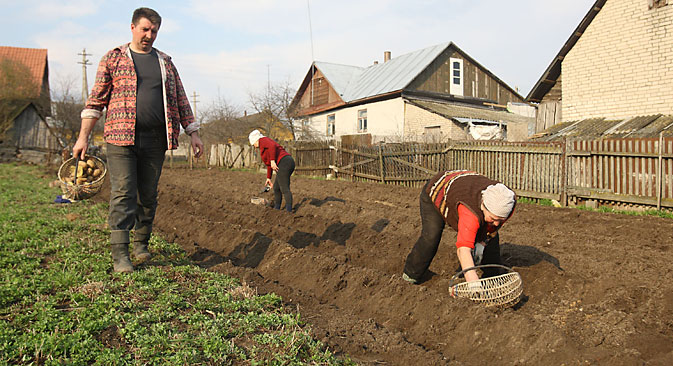 The “produce war” between Russia and the West is encouraging an already growing trend towards growing your own food. Source: ITAR-TASS

Dacha gardens have traditionally provided urban Russians extra food in times of deficit. Recent sanctions may encourage more of them to take up gardening.

One consequence of Russia’s ban on food imports from the United States and the EU could be a renewed interest among Russians in growing their own food. While most Russians live in cities - 74 percent, according to the 2010 census – many of these urban dwellers have a small country house called a dacha.

During the Soviet era, when the availability of a wide range of food items was sporadic, people used their dacha plots to supplement what they could buy in stores. Experts suggest that changes in food supplies caused by the sanctions could again encourage Russians to look to their own land as a source of fresh food.

Natalia Akindinova, head of the Center of Development Institute at the Higher School of Economics said that the restrictions on imports have caused inflation to increase more rapidly than previously anticipate.

"Under these conditions, low-income citizens, whose main household expense is groceries, would be better off relying on their own hard work, especially in their dacha gardens,” Akindinova said. “Besides that, a lot of people already have these gardens. They will just have to start using them more."

A virtual tour of the dacha

Overall, the figures really are quite impressive. According to a recent survey by the Public Opinion Foundation (FOM), 59 percent of Russians own dachas. For 54 percent of these dacha owners, the produce they grow in their own gardens constitutes a “substantial addition to purchased food products.” This number increased from 49 percent in a similar survey in 2011.

However, FOM analyst Irina Osipova said that is difficult to say if this increase is due to the sanctions. “The season is already over, so the only thing we can do is continue research next year,” Osipova said. “After all, nobody is going to be making parmesan at their dacha. However, products grown in dacha gardens really did help a lot in times of crisis."

Researchers have noticed a newfound interest in dacha gardens in recent years as environmentalism and a healthy lifestyle have become trendy among Russians.

"Whereas in the mid-2000s many people started growing flowers instead of fruits and vegetables, now we are seeing a return to produce,” Osipova said. “And, of course, when we ask about food products, Russians tend to prefer domestic [goods], considering them to be more environmentally friendly and healthy.”

Researcher Akindinova said that while the trend toward healthy living is good, there is a downside.

“From a social point of view, the fact that people can provide for themselves is certainly a good thing. We can only welcome such a lifestyle with open arms,” Akindinova said. “But, of course, productivity drops as a result of this trend, and it might have a negative effect on the overall economy. People will be distracted from their core line of work. In and of itself, the desire to have a private garden and travel outside the city for rest is quite normal, but to rely on the garden for produce is a strange practice for residents of a normal country.”

Geographer Vladimir Kagansky said that there is another reason to be concerned about any growth in dachas. According to him, the belt of dacha communities around large cities is destroying the existing structure of the land and eating away at natural resources.

“The ecological balance has been skewed,” Kagansky said. “A lot of dacha plots are plagued by waterlogging (because people cut down trees that soak up moisture from the ground), rare plants are disappearing, and fires are a common occurrence because many dacha residents are careless. According to my estimates, one are of dacha plot completely transforms, in a negative sense, about 5-6 acres of surrounding land.”

In fact, according to Kagansky, the dacha trend amounts to the colonization of the Moscow suburbs by one group of people to the detriment of others.

"Of course, dachas, especially in the 1990s, were a means of survival, but it is wrong to undermine the fate of entire regions because of this trend," Kagansky said.