Finding religion behind bars: How one Russian turned his life around 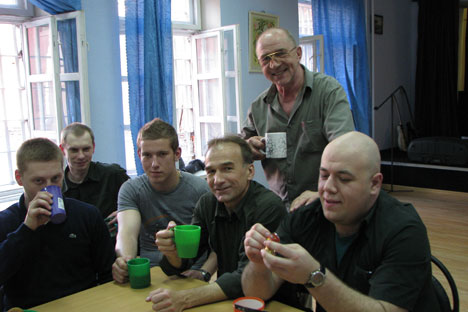 Mikhail Senkevich (background) has spent over 10 years of his life in detention facilities, where he first adopted his faith. Source: Press Photo

Mikhail Senkevich, a Pentecostal pastor and member of the public monitoring committee for the implementation of public observation of human rights in centers of detention, told RBTH about how he turned to religion in jail and the challenges and changes this brought.

In August, a governmental commission approved a bill to protect the freedom of religion among prisoners. The bill makes it possible for prisoners to adopt a new religion, as well as to have greater personal access to spiritual guides.

There have even been cases in which prisoners, upon release, have become priests. However, in the past, life could be quite difficult for those who chose to take up religion while incarcerated.

Mikhail Senkevich is a Pentecostal preacher and a human rights advocate. He has spent over 10 years of his life in detention facilities, where, as a prisoner, he first adopted his faith. Senkevich came from a family he describes as “completely normal”; his parents were in the military, and his brother was a scientist. “But I was drawn to the streets,” he says.

“I was first convicted at the age of 14, but the sentence was suspended, so I didn’t end up going to prison. I received my first real prison term at the age of 27 for burglarizing an apartment. I served six years, after which I was released. Later, I received another 10-year sentence for a narcotics charge.”

Senkevich turned to religion in 1987, when a group of evangelists visited the penal colony where he was serving his sentence and gave sermons.

The current Criminal Code states that a prisoner has the right to interact with spiritual guides, but the code neglects to explain the specifics of how this right is to be implemented. Lawmakers are currently hoping to propose specific guidelines that indicate exactly under which conditions and for how much time an incarcerated individual is allowed to speak with representatives of the clergy, and to which types of religious items prisoners should be allowed access.

Practitioners of religious confession emphasize the importance of this next legislative step. As the Synod Information Department of the Russian Orthodox Church announced to the newspaper Kommersant, interactions with incarcerated individuals prior to this legislation depended solely on an agreement between a local diocese and the local administration of the Federal Penitentiary Service. The deputy chairman of the Russian Mufti Council, Rushan Abbyasov, explains: “The new rules for church representatives’ visits with incarcerated citizens can fully enable the clergy to help people in difficult circumstances.

“They gave me a copy of the New Testament, and I started praying and going to meetings,” he says.

“After some time, I became a group leader and began organizing services. Upon my release in 1990, I found my way to a church,” the pastor explains.

“With my criminal life in the past, I graduated from the International Bible College and became a preacher. I started holding classes in the prison. I wanted to make a difference in the lives of prisoners.”

Senkevich then enjoyed eight years of freedom, which, measured by the standards of a life of crime, is a very long time. However, he eventually suffered a relapse and returned to drugs.

“I was sentenced to another 10 years that time. Being behind bars again made me come to my senses very quickly,” he recalls. “I ended up in the Ulyanovsk penal colony, and I started spending time at the chapel.”

A group of around 30 worshipers eventually formed at the prison, and the members started to behave quite differently from the other prisoners.

“There was no more violating regulations; people quit smoking, and we stopped avoiding our duties at the facility,” says Senkevich.

However, trouble was on the horizon: The group became immune to external pressure and influence, and the prison community “began to feel uneasy” about the collective.

Antagonists convinced the warden that the group’s meetings were dangerous and that the members were not gathering to pray but to plot a prison riot. Prison officials responded first by placing Senkevich in solitary confinement, and later transferring him to a different penal colony.

According to his transfer documents, Senkevich was to be forbidden from interacting with people in the general prison areas. In this case, however, the slow mechanisms of bureaucracy actually proved beneficial.

Jailbirds, artists and entertainers: The story of Moscow’s Alcatraz

While officials were processing his documents and determining how to proceed with his case, Senkevich was able to spend an entire week among the general prison population.

“During this time I managed not only to become acquainted with two like-minded brethren,” he recalls, “but also to demonstrate to the authorities that I was law-abiding. They came to understand that I was observant of all of the rules, and they never tried to isolate me. Eventually, we formed another group of worshipers.”

After enduring all of these tribulations, Senkevich finally regained his freedom. He continued to serve the church, where he eventually met his future wife. Now in his 60s, he is a father to two boys, aged six and nine.

He said that it is difficult for people to adapt to a normal life after living in detention. But with the help of religion, the adjustment process is a great deal easier.

Nowadays, nearly every penal colony has an Orthodox priest, and a majority of colonies now also feature spaces for worship for Muslims, Jews, and Evangelicals. Because these religious amenities are not organized according to a centralized plan, but rather are instituted according to the discretion of individual penal colonies, no official statistics about them exist.

Vladimir Osechkin, a human rights advocate and the organizer of the social network Gulagu.net, claims that the status of prisoners’ rights with respect to religious freedom has improved with the advent of new leadership in the Russian FSIN over the past two years.

According to him, religious ceremonies are now being conducted, prayer rooms are being designated, and in the Moscow detention centers there are Orthodox temples, synagogues, and worship spaces for followers of Islam.

“Correctional facilities, of course, are not the ideal places for the practice of religious traditions,” says Osechkin, “but at least now prison administrations generally understand that religion is a component integral to the process of resocializing those who have committed crimes.”

In 1992, Fr. Nikolai Aksyonov, a parish priest in the town of Sablino, 25 miles outside St. Petersburg, became the chaplain of the women’s Penal Colony-2 Sablino.  The prison is home to over 800 women who are serving time for a variety of crimes ranging from murder and robbery to drug offenses. For Aksyonov, as for many Orthodox priests taking on social ministries at that time, the program was not something he had planned for a long time, it was simply a response to need.

Related: Counting the days behind bars

“Our parish in Sablino is geographically located next to this prison. The believers in the prison, they were abandoned. They felt they had no guidance, so they turned to me and they asked the bishop to bless me so that I could do that ministry in the prison,” Aksyonov said. “I went there once, then I just had to keep coming back because they were waiting for me and I saw that they were in need.”

With funds raised from his parishioners as well as from a consortium of churches in southwestern Ohio, the Miami Valley Episcopal Russian Network (MVERN - http://www.mvern.org/), Fr. Nikolai built the first free-standing chapel inside a Russian prison.

During his tenure at the prison, Fr. Nikolai baptized an average of 25 women each month. One of his former prison parishioners became a sought-after icon writer after her release.

Orthodox services continue to held in this prison today under a different chaplain.