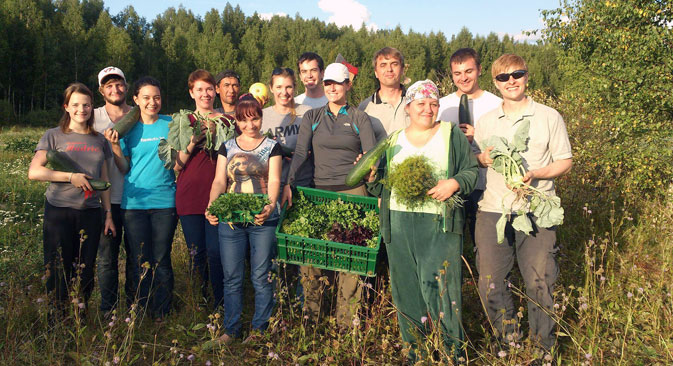 Shareholders and supporters of Seeds of Hope pose on the land after a Saturday harvest. Organizer Andy Millman is second from the left. Source: Personal archive

Andrew Grenfell didn’t expect to spend much of the spring looking for a tractor. Grenfell and his colleague Andy Millman thought they had a pretty clear understanding of the challenges they would face in starting Russia’s first community supported agriculture (C.S.A.) project, but finding someone to actually till the land wasn’t one they had anticipated.

“Of course we didn’t know how the seed varieties would do, we didn’t know the yield, the weather,” said Grenfell, but the answers to all those questions depended on getting the seeds in the ground in the first place.

“We rang people renting tractors, selling plows, and we couldn’t find anyone! If they had a tractor, they didn’t have a plow. If they had a tractor and a plow, they were working their own land,” Grenfell said. Eventually the former director of the collective farm that used control the land the C.S.A. rents agreed to do the tilling.

Grenfell and Millman both work for Moscow Protestant Chaplaincy (M.P.C.), an interdenominational Christian church supported by five major American denominations, and they were responsible for putting into action an idea that had been floating around the church for at least two years – a farm that could provide work for some members of their congregation and produce food for its food bank. 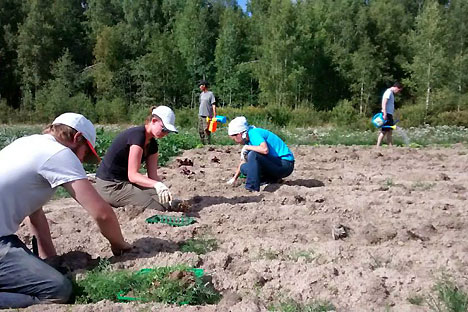 Throughout the summer, groups of 10-20 people made the 5-hour round-trip from Moscow to the farm on Saturdays to take care of the 150 hectare plot. Source: Personal archive

“Originally the idea was ‘let’s start a farm. Let’s get a bunch of corn and grow it and bring it in because they don’t have corn here,’” said Millman. “But there are lots of reasons why you don’t grow corn in the Moscow Oblast [region].”

The idea of using a C.S.A. model as a basis for the farm, which is called Seeds of Hope, came with the arrival of Millman, 26, a Global Mission Fellow with the United Methodist Church, who had experience working with a C.S.A. in Upper Marlboro, Maryland. “When I got here, I was asked to build a broader business plan and model out what it would look like. Seeing as there aren’t C.S.A.s in Moscow, we kind of made it up along the way.”

Going back to the Land

According to the United States Department of Agriculture, a C.S.A. is a community of individuals who pledge support to a farm. C.S.A. members buy a “share” of produce at the beginning of a growing season and receive produce in the late spring or summer as it becomes available. A C.S.A. may have a set number of weeks, or farms may provide produce to members until the growing season ends.

The system gives farmers a safety net against a poor harvest as well as better prices for their crops overall. Shareholders benefit from fresh, often organically grown produce. Additionally, in the words of the U.S.D.A., “all have at their center a shared commitment to building a more local and equitable agricultural system, one that allows growers to focus on land stewardship and still maintain productive and profitable small farms.

These ideas dovetailed well with the social mission developed for the project by M.P.C., which was to provide employment; bring together diverse communities and foster understanding; subsidize and support other projects and raise awareness about diet.

As the Moscow C.S.A. developed, the importance of shared commitment to the project became more important. After some of refugees who worked on the farm were harassed by the police, many of them were afraid to continue to work there.

To get the growing crops weeded, watered and harvested, Grenfell and Millman turned to their shareholders. Throughout the summer, groups of 10-20 people made the 5-hour round-trip from Moscow to the farm on Saturdays to take care of the 150 hectare plot.

“Most of the farm members have been understanding of the situation,” said Grenfell. “Their feeling is ‘I signed up for this to support the mission of what you’re doing, not because I expected a certain level of service.”

The organic produce, however, is an important side benefit. At the height of the season, the farm was producing nearly 400 pounds of vegetables a week – providing a decent share for the farm’s approximately 40 members and additional produce that farm volunteers sold at a stand on Sunday afternoons.

As the project developed, interest in the C.S.A. grew and now there is a waiting list for shares. The farm members, who are almost entirely members of the expat community, don’t generally have gardens or yards where they could grow their own vegetables, and certified organic produce in Russia is very expensive because of complex legal regulations.

Grenfell and Millman said that reaction to the C.S.A. concept among the Russians they have worked with has been positive, but they were careful to note that the people they approached about the project were already invested in the locally grown, small-scale farming movement.

For example, when the C.S.A. consulted the Moscow organic food cooperative LavkaLavka about where to buy seeds, Grenfell describe the reaction of their contact to the initiative as “astonished delight.” Farmers at the Nikola-Lenivits organic farm in the Kaluga Region just south of Moscow also contributed advice, and a farmer in the southern Russian city of Volgograd contributed seeds because he was interested in the social aspects of the project.

A virtual tour of the dacha

The only Russians who are C.S.A. members are friends of Grenfell and Millman. Many Russians have weekend houses, known as dachas, where they grow their own produce, so the demand isn’t as great.

Will a reliable source of organic produce become more appealing as the effects of Russia’s ban on fresh food from the U.S. and the EU become more evident?

“Some people have mentioned them [the sanctions], have said ‘this is great news for you.” Grenfell said. “But I think it’s going to be more great news for large agribusiness in Russia than it is for us.”

For more information about Seeds of Hope including how to support the project, visit the web-site of the Seeds of Hope project or the official Facebook page.