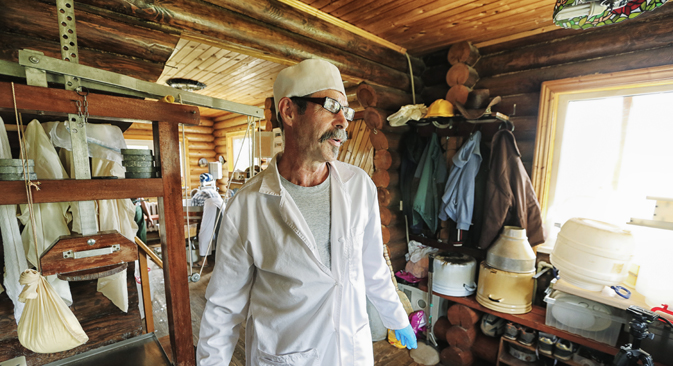 Growing up, Jay Close may not have dreamed of moving to Russia and becoming a self-described “cheese tsar,” but today his products are flying off the shelves and, thanks to sanctions, business is set to boom.

RBTH: When did you first time come to Russia? What were your first impressions?

Jay Close: I came to Russia in 1993 for 10 days. It was run down, a lot of things weren’t painted, things crumbling and roads really bad. There was a sadness in people, they went to work and weren’t sure if they are getting paid or not. It was a strange time, but still people were able to keep a smile and their sense of humor and make a feast out of nothing.

RBTH: Why did you decide to stay?

J. C.: I didn’t decide to say, I wanted to know more! My friends asked me: “How did you like it?” I said I didn’t like it and didn’t dislike it. So I came back within about six months.

RBTH: Can you tell me more about your animals? When did you buy your first cow?

J. C.: Probably about five-and-a-half years ago. I bought the land because I wanted to live close to nature. I built a house myself with the help of some friends. (I also used to work as a carpenter). Before the house was even finished, I had a cow, bull and their little babies (about 50 kilos each). The cow eventually gave milk which usually take 2,5 years after the calf was born. So I was thinking, what I’m gonna do with 28 liters (9 gallons?) a milk a day?

I visited Holland on a regular trip, which I used to do it a lot because of visa issues, and decided to learn how to make cheese.

RBTH: What types of cheese do you produce now?

J. C.: Better to ask how many different types, we counted yesterday 34 types, not including yogurt.

Jay, the cheese maker: Giving up everything to live on a Russian farm

RBTH: Do different clients prefer different cheeses? For example, is one kind more popular with Russian clients, another with expats?

J. C.: I can’t say; it’s about what they like. The most popular are Italian garden (with tomato, red pepper, basil, garlic), shambala (with the taste of walnuts), gouda, and roquefort.

People are expanding their taste habits in Russia, I’m sure there are some kinds of my cheeses they wouldn’t even have tried 10 years ago. I worked as a chef in many restaurants and noticed that. Since I came to Russia, I have been educating Russians about foreign food, about great things we have, like burritos, quesadillas, pumpkin pie, carrot cake, maple syrup – stuff they’ve never heard before.

RBTH: Do you think there is a market for agritourism in Russia?

J. C.: Yes, I do, because be people are giving more attention to what they are eating and where it’s from. If they go to a farm, they’d like to see where the food is coming from.

RBTH: Do you see any difference between the Russian mentality and the American one, particularly in the business context?

J. C.: Everybody is different, but everybody in the same. How different? It can take weeks to explain this. I like Winston Churchill’s expression “Russia is a riddle wrapped in a mystery inside an enigma.” It doesn’t explain anything, but it’s a funny way of putting it.

RBTH: After 20 years here, do you feel more Russian or American?

J. C.: I can’t say… Russian is the fifth language I speak pretty well. I don’t know how many countries I’ve lived in. I like to see different cultures, weather, animals, people, food. I get sick if I’m stuck in one place. I lived in France for six-seven years, I got bored and moved to Russia by chance – it was my midlife crisis.

RBTH: What is your dream?

J. C.: To feed people better, to teach them how to eat better. Give as many degustations in my lifetime, so the world changes a little bit

I think we don’t progress, we regress. Food became cheaper and worse and we are not eating the right stuff.

RBTH: What are the most challenging and unexpected things about doing business in Russia?

RBTH: Do you miss some things by living in Russia?

RBTH: People know about the American dream, but do you think there is a Russian dream?

J. C.: This dream has changed in the last decade. Ten-15 years ago it was to be a businessman, have a Mercedes, to be wealthy, to have house in the city and in the country.

For some Americans – to have a house, two kids, two cars, a driver, and a gardener. For others, to became famous in Hollywood or in the arts or music. Some dream to become a famous cook. For me – Cheese Tsar of Russia.

A lot of people tell me, ‘you’re not an American. You’ve been leaving here so long, you’re Russian!’ But I doubt that you can become Russian without being born and raised here.

RBTH: Where can people buy your cheese?

J. C.: In two St. Petersburg stores and in three in Moscow, or right on the farm. We are not doing mail orders to Australia and America, although many people have already asked. It’s probably illegal to sell my cheese in the U.S. because I make it from unpasteurized milk.

RBTH: If it’s not a secret, how profitable is your business?

J. C.: Look around, I’m doing fantastic. I work a lot, I like what I’m doing, I like meeting new people who like cheese and come here. And not only cheese, we make carrot cake, cheesecake, cannelloni, lasagna, bread, jam and pickles. I grow vegetables and find it great to eat your own stuff.

It’s not easy to grow stuff without chemicals. But Russia is famous for babushka’s recipes and advice. They inspired me!

Living in Moscow for so many years, I saw how grandmothers were coming back from the country, from 3 months exile with all these products and food they grew. This is how they fed their families and the whole country in Perestroika times.

As a child I was growing corn, tomatoes in the garden in California and Australia, now I buy vegetables only in winter. In summer we have berries, apples, mushrooms.

What do you think about the recent food sanctions? Is your business getting more attention since they started?

I personally don’t like the sanctions. I could be wrong, but I think just a lot of innocent people suffer. But they are good for my business. People are more interested and I’m getting more orders.