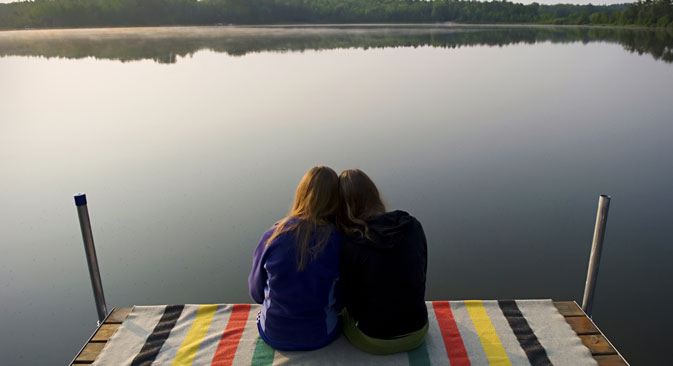 Children-404 gets between two and seven messages a week from teens asking for help. Source: Getty Images / Fotobank

Dozens of lives have been saved thanks to the work of the Children-404 project, Russia’s only group for lesbian, gay, bisexual, and transgender teens. A team of volunteers and psychologists throughout Russia is helping young people who have been rejected by their teachers, beaten by their friends, or kicked out of their parents’ houses because of their unconventional sexual orientation.

Early last year, literary editor and journalist Yelena Klimova was writing an article about the controversial Russian law banning the ‘propaganda’ of homosexuality to minors, which came into force on 30 June 2013.

During the course of her research, Klimova, who is from the provincial town of Nizhny Tagil, around 1,000 miles from Moscow, asked herself two important questions: Are there gay children in Russia? And if so, who will protect them?

Children-404 accused of breach of the law

While many have hailed Children-404 for its championing of a cause which remains largely taboo in Russia, not everybody has welcomed Klimova’s work. On 31 January 2014, an administrative case was launched against the founder of Children-404 for allegedly violating the ‘homosexual propaganda’ law. There is a petition in her defense on the Change.org website.

She decided to post these questions on the Russian social network Vkontakte to see what kind of response they would generate. “I thought there would be five or six answers, but I was showered with dozens of letters. I’m still getting them,” Klimova said.

The journalist subsequently decided to found a group to provide support to lesbian, gay, bisexual, and transgender (LGBT) teenagers in Russia. In the year since its inception, her brainchild, Deti-404 (Children-404), has received more than 1,500 letters from all over the country.

The Russian authorities do not officially recognize the existence of LGBT youth. Hence the name of the project – Children-404 – which refers to the error message that pops up when an internet browser cannot find a webpage.

With the authors’ permission, Klimova started to post the letters on the project’s social media pages. Each letter was permeated with the pain and despair of living in an atmosphere of hatred, written by teens who had realized they were attracted to people of the same sex.

Participants in the group wrote supportive comments under the letters, assuring the young teens that their lives were not over. Concerned participants offered their help by tracking down psychologists who agreed to chat with the troubled youngsters.

There are now 15 psychologists working on the project. Consultations are usually held online, meaning that anyone from any city in Russia can seek help.

St. Petersburg-based psychologist Alexander Emris helps one to two people a week. He communicates with the teenagers anywhere from a few days to a few months. “Usually it’s written correspondence. Telephone calls are a lot rarer, and in-person consultations are even more seldom. I gave the latter twice, when the kids stayed with me. They had nowhere to sleep because they were being harassed by their parents, who had found out about their orientation,” Emris told RBTH.

Last year, he was contacted regularly by teens who had fallen victim to homophobia. “And generally the first thing they do is go in search of the support, understanding, and attention they lack,” he said.

The psychologist remembers one case in which he was approached by a boy who suffered from panic attacks and had tried to kill himself twice. “He didn’t want to live anymore. He thought his parents didn’t love him, and he didn’t want to endure his deteriorating health, which he hid from his parents,” Emris said.

He managed to convince the troubled boy to tell his parents about his health, and the doctors discovered that he had early-stage brain cancer. “He was going to tie a noose for himself because of it. We had to explain that things could be a lot worse,” Emris said. “Then he stopped talking to me. I decided that I must have made a mistake. But a month later, he told me through Lena Klimova that he had never felt so well.”

In search of accommodation

The project volunteers also help young people in emergencies, including cases of grievous bodily harm, runaways, and stays in psychiatric hospitals. However, the volunteers have limited room for maneuver when it comes to helping minors.

“In that case, we act as intermediaries between the teenage victims and LGBT organizations,” said Khana, a coordinator for Children-404’s psychological group. “If legal adults come to us, the possibilities to help them are a lot greater.”

Khana explained she was currently overseeing the case of two lesbians: “One of them was held captive at home, beaten, stripped of her documents and means of communication, and the other one helped her run away. As far as I know, the parents attempted to portray everything in a completely different light, as if the girls just wanted to drop out of school and run away,” she said.

When it is dangerous for young people to stay at home, the volunteers search for temporary housing on their behalf. In many cases, the volunteers themselves let the teens stay in their own apartments. If necessary, they are rendered legal assistance or help finding work. The volunteers often go and talk to the LGBT teens’ parents.

“A transgender teen asked the project for help. He wrote that he was being beaten and humiliated at home. His father told him that he would cripple him but make him normal,” said a volunteer named Nadya. “A psychologist talked to the transgender teen, and then we found an apartment where he could escape from his parents. He lived with my acquaintances for almost a year. We talked to his parents and managed to reason with them a little. Now he is a legal adult, and he is fine. He works and studies and is renting an apartment,” she said.

Children-404 gets between two and seven messages a week from teens asking for help, according to Maria Naimushina, a psychologist based in Perm (800 miles east of Moscow). Asked whether she was surprised by the number of LGBT children in Russia, she said there are actually even more – many simply don’t know about the Children-404 project.

In an effort to get the word out that LGBT youth does in fact exist, the group’s creator Klimova has written a book containing letters written by LGBT teens. She has one answer to accusations of ‘homosexual propaganda’: Stories about how hard it is to be homosexual in Russia are unlikely to entertain anyone.