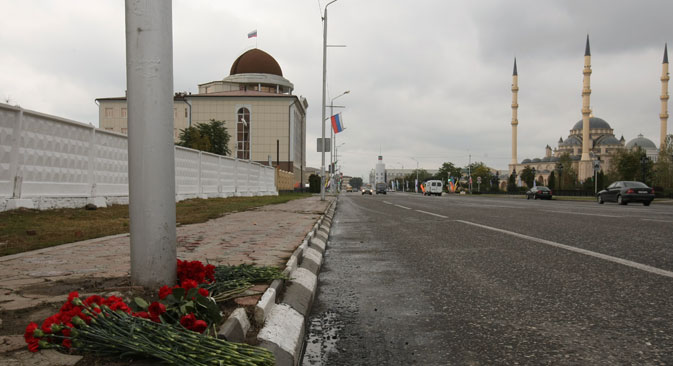 Flowers to commemorate those killed by an explosion on Khusein Isayev Prospekt in Grozny. On October 5, a suicide bomber blew himself up, killing five police officers and leaving over 15 others injured. Source: Said Tsarnaev / RIA Novosti

An explosion rocked the center of Chechnya's capital Grozny on the evening of Sunday, Oct. 5, killing five policemen and wounding 13 other people. Russian political and security experts do not exclude the possibility that the terrorist was linked to Islamic State (ISIS), but suggest not rushing to conclusions.

A suicide bomber blew himself up by the entrance of a concert hall in Grozny, the capital of Russia’s Republic of Chechnya, on Oct. 5, killing five policemen and wounding 13 members of the public.

The concert hall was to host an event celebrating Grozny Day, which coincides with the birthday of Ramzan Kadyrov, the president of Chechnya.

The suicide bomber has been named as19-year-old Apti Mudarov, a resident of the city’s Staropromyslovsky neighborhood. Mudarov had been missing since leaving home about two months ago, and his family had no idea of his whereabouts.

Kadyrov wrote on his Instagram page that the event would not influence the situation in the republic and that the republic is "fully controlled by the law enforcement organs." He also promised to "destroy anyone affiliated with this terrorist act."

Sergei Goncharov, president of the Veteran Association at the Alpha Antiterrorist Unit, told RBTH that he does not consider the timing of the terrorist attack to be coincidence.

"The terrorist act coincided with the [Muslim holy] celebration Eid al-Adha, Kadyrov's birthday and Grozny Day," said Goncharov. “It was obviously planned. The suicide bomber could certainly have had links to the ISIS militants.”

Kadyrov had recently responded sharply to aggressive statements from ISIS directed at Russia, saying that he would defend Russia's interests, added Goncharov, who believes that the terrorist attack could have been a response to the Chechen president's statements.

Vadim Kozyulin, from the PIR Center of Political Research, also does not exclude the possibility of a link between the suicide bomber in Chechnya and Islamist militants from the Arab world.

“Military experts working to counter the use of radio-controlled bombs say that two years ago the Arab world saw the introduction of the same types of bombs that were used in the military campaign in Chechnya," explained Kozyulin. "That is, the Arab world and Chechnya have been exchanging technologies for quite a while."

Kozyulin also noted that the exchange concerns not only technology but also people, who are being recruited by ISIS from Central Asia, the Caucasus and Russia: "Islamists are the threat that our region will soon have to confront," he said.

Nikita Mendkovich, from the Russian Council on International Affairs, said that there is still no direct link between the Chechen terrorist and ISIS, and that speculation on this subject is related to the broad access to information about the activity and ideology of the Islamic State militants.

"Marginal elements with an extremist orientation use the name ISIS as a well-promoted brand," said Mendkovich, pointing out that while extremists recently hung up an ISIS flag in a town in Uzbekistan, “this does not mean that the organization has penetrated into Central Asia."

U.S, Russia find common ground on ISIS while agreeing to disagree on Syria

According to Mendkovich, the most terrorists from the Caucasus can do is establish contact with ISIS representatives via the internet - therefore it is too early to speak about a serious penetration of Russia by radical Islamists.

Vadim Kozyulin confirmed the fact that modern communication methods help terrorists demonstrate their presence in the region and react to anti-terrorism measures, arguing that Islamist movements are "conducting a PR war.”

“In the case of Chechnya it is possible that the motivation behind the terrorist act was that the government is weak and Kadyrov is speaking in vain," he said.

However, Sergei Markedonov, a political analyst and professor at the Faculty of Foreign Regional Studies and Foreign Policy at the Russian State Humanitarian University, believes that there is still too much speculation around the terrorist act in Chechnya and it is therefore too early to draw conclusions.

"We have little information about ISIS activity in the Caucasus,” said Markedonov.“It is still not clear whether the terrorist act in Grozny was some kind of signal for the republic's government or for Russia in general."

While Markedonov believes that Chechnya has become more stable in comparison with neighboring republics, such as Ingushetia, he acknowledged that problems still remain.

"By and large, in Kadyrov's stabilization model many things exist only on the surface, while real problems are kept quiet," he said. "Hushing them up could sooner or later explode into a terrorist act."

However, Markedonov considers Sunday’s incident unlikely to be capable of seriously destabilizing Chechnya: "It is important to understand that Kadyrov's stabilization is not the solution to all the problems. Probably, it is only a tactical solution," he said.