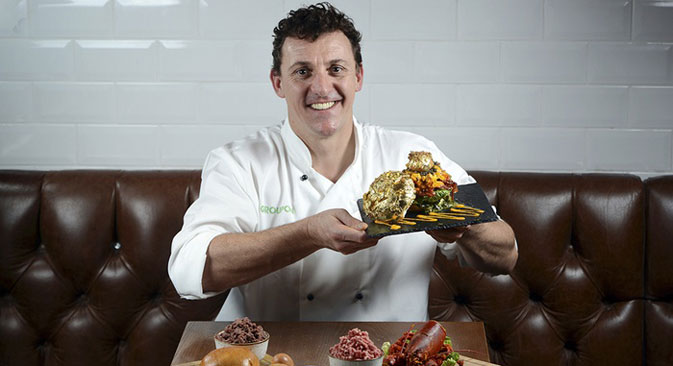 The Glamburger, the world's most expensive hamburger. Source: Press Photo

Having fun with stories about rich food, Romans, homosexuals and secret service agents, Nick Holdsworth in Moscow unearths a Russian take on news making the headlines at home.

Russian state news agency RIA Novosti is as Russian as fish and chips are British.

Just when you thought some modern concept would sweep it away in a flurry of fast food wrappers it resists all attempts to eradicate it.

It's nearly a year since, in a fanfare of publicity, Dmitry Kiselyov, the Rottweiler of Russian newscasters, who infamously threatened on air to turn the USA into a pile of  "radioactive ashes", was appointed head of a new government media group Rossiya Segodnya and RIA Novosti was reported to be shedding staff before being consigned to the dustbin of history.

And yet, here it still is, faithfully churning out such fabulous nuggets of entertaining news as this: a posh London restaurant has invented the world's most expensive hamburger, a gold-dusted, Japanese beef and venison delicacy, a bargain at just £1,100 (which, at the equivalent of 70,500 roubles, is more than a month's wages for most Russians.)

Never mind that RIA's short story skims over the details available on further investigation from the British newspaper that is the source for its story, that Honky Tonk, a US-themed restaurant in the chic district of Chelsea (incidentally home to many of the London's well-heeled Russian residents) created the burger as a publicity stunt to advertise an online discount website.

Or that the photograph carried by RIA is a stock agency picture of a regular burger, bearing virtually no resemblance to the Japanese wagyu-beef, New Zealand venison creation, spiced up with beluga caviar, powdered green tea and truffles. Oh, and maple syrup-coated bacon and a hickory smoked duck egg covered in edible gold leaf.

It was enough to tell Russian readers that this was "The Glamburger."

Enough calories to feed a man for a day

Given that Russia, despite its current economic woes, still boasts 213,000 millionaires, RIA's brief story could well provide Honky Tonk with its first surge of customers for the expensive treat, which contains 2,618 calories, more than the recommended daily intake for a grown man.

Russia's news sites prefer, like all of us, to write about instant millionaires, even if they are only rouble millionaires.

Building a fortune - the ancient way

In the headlines this week was the heart-warming story of British builder Laurence Egerton, who unearthed a hoard of 22,000 Roman bronze coins on farmland in Devon.

Russian website Nauka i Zhizn (Science and Life) reported that the metal detecting enthusiast, who was searching private farmland near the seaside town of Seaton, found two 4th century AD copper coins before digging down to find "a scattering of coins."

Mr Egerton spent three nights sleeping in his car near the find, lest less scrupulous treasure seekers heard of the find, before a formal archaeological dig was organised.

"It is important to record all these finds, because it's too easy to lose the details or our history," Mr Egerton said.

Experts who cleaned the coins say they are remarkably well preserved.

Under British laws the coins must be offered for sale to a public museum at a price set by an independent board of experts. The proceeds of any sale are divided between the finder and landowner, where there is an agreement on this.

Mr Egerton's find is likely to be housed in the county museum in Exeter, which is trying to raise around £100,000 to buy them. That would make him a millionaire in Russian terms, as he is entitled to half that amount, enough to exchange for 3.2 million roubles.

If odd dishes and fabulous treasures seem pretty much predicable British stories for Russian news sites to cover, there is one other eccentricity that is not confined to the British Isles that the Russian media always leaps on.

I confess that I remain puzzled about Russia's obsession with homosexuality; the Russian law last year prohibiting the propagation of gay lifestyles to minors only brought critical headlines worldwide and damaged the country's image ahead of the Sochi Winter Olympics.

It writes that Fry had leapt to the defence of Estonian homosexuals, where plans by the former Soviet republic's parliament to introduce a law allowing same-sex unions had prompted a rare display of unanimity from arch conservatives in Russia and evangelists in the USA, who have both been pumping money into campaigns to intimidate Estonian politicians from voting for the measure.

There's one other topic that is always sure to provoke a knee-jerk reaction in Russia: spies.

RIA recorded the appointment of Alex Younger, who is succeeding Sir John Sawers as head of Britain's SIS, or Secret Intelligence Service.

In an admirably straight piece of reporting that avoided any temptation to make references to James Bond (where Britain's spy chief was fictionally immortalised simply as "M") the news agency noted that former army officer Mr Younger's "experience in Afghanistan and during the 2012 Olympic Games in London will be very useful for MI6."

RIA added that MI6 "insists that the personnel changes in the foreign intelligence are planned and unrelated to the events in the Middle East and Iraq."

Nick Holdsworth is a Moscow and Bristol-based British journalist, writer and filmmaker. He has worked in Russia from 1991.