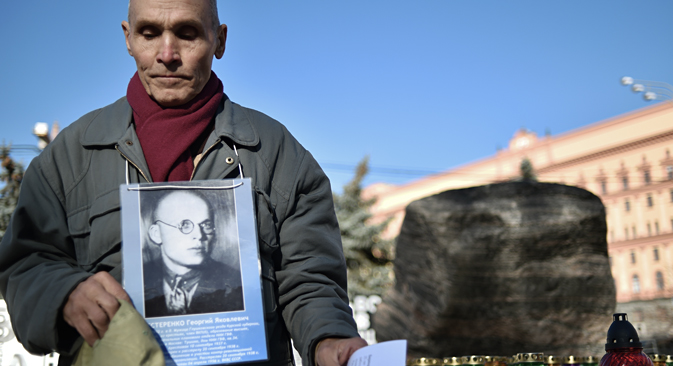 A man holds his father's portrait near the memorial to the victims of Soviet-era political repression, the Solovky Stone monument, on Lubyanka Square in Moscow, on October 29, 2014. Source: AFP / East News

Every year on October 30, Russia marks the Day of Remembrance of the Victims of Political Repression. The day before, on October 29, a day-long demonstration called ‘The Return of the Names’ is held in Moscow, where people gather on Lubyanka Square to read out the names of those killed during repression. Anyone can participate in the event.

The victims of Stalinist repressions were remembered in Moscow yesterday during an annual remembrance ceremony in front of the Lubyanka, the former NKVD and KGB headquarters where vast numbers of Soviet citizens were imprisoned and tortured during the Stalin era.

Called ‘The Return of the Names’, the demonstration is organized by human rights body Memorial every year on Oct. 29 as part of the Day of Remembrance of the Victims of Political Repression, which is on Oct. 30.

Anyone can come to Lubyanka Square and help read out the names of compatriots, their professions, and the date they were shot. The names of the dead are read off for 12 hours straight, with no breaks. Similar demonstrations are taking place in many cities this year.

The Day of Remembrance of the Victims of Political Repression was formally established in 1991. October 30 was chosen because on that day, in 1974, prisoners from the Mordovia and Perm prison camps began a hunger strike against political repression in the Soviet Union.

Honoring those arrested as ‘enemies of the people’

This day honors people who were unjustifiably subjected to repression and shipped off to forced labor camps, exiled, or put to death during and after Stalin’s Terror (also known as the Great Purge or Great Terror). The precise number of victims has yet to be released, but it is well known that millions suffered.

The Russian law on rehabilitating the victims of political repression defines political repression as any coercive measure enforced by the government for political reasons in the form of deprivation of life or liberty, relocation for involuntary treatment at a psychiatric hospital, exile and withdrawal of citizenship, the eviction of particular groups, expulsion and banishment to special settlements, forced labor with restrictions on freedom, and any deprivation or restriction on rights and freedoms.

Repression hit its peak in 1937-1938, when 1.3 million people were put on trial for “counterrevolutionary crimes.” Half of those people were shot. At that time, the concept of “enemy of the people” was a part of everyday life.

To be assigned that label meant not only to be deprived of personal freedom, but often to be deprived of life itself. It also meant sure danger for the family of the person deemed to be an “enemy of the people.” The wives of “enemies of the people” were sent to the Gulag for at least five to eight years, and their children were shipped off to camp colonies or special orphanages.

On October 30, 1990, a monument called the Solovetsky Stone opened up on Lubyanka Square at the initiative of the Memorial human rights group. The Solovetsky Stone is a large stone delivered to Moscow from the Solovetsky Islands, which housed a special-purpose prison camp opened in the early 1920s that marked the advent of the Stalinist Gulag system.

In the eight years since the Return of the Names demonstration was started, the names of those killed in Moscow alone have not been read off in their entirety because there are so many. According to Memorial, in 1937-1938 alone more than 30,000 people were shot in the capital. More than 720,000 executions were performed in the entire USSR during that period.

Remembrance as a vaccine

“Society and each one of us must relive and re-evaluate history anew in order to avoid such tragedies, in order to remember them, to vaccinate ourselves against a recurrence,” Memorial chief Alexander Cherkasov told RBTH.

“Throughout all these years we haven’t managed to read out the names of all those who were killed in Moscow. It’s the same routine as perpetuating the memory of those killed in the German concentration camps, where brass nameplates were installed in the paving stones to remember those who never returned,” he added.

According to Cherkasov, this type of demonstration lets people experience a sense of ownership in the country’s history. “These aren’t just individual fates – this is the fate of the entire country. There were three significant catastrophes in Russia in the 20th century that influenced the destiny of almost every family – collectivization, the Great Terror, and the Great Patriotic War [World War II – RBTH]. The memory of the Terror is no less important than the memory of the war,” he said.

Lyudmila Alexeyeva, a famous Russian human rights activist and chairwoman of the Moscow Helsinki Group, has always participated in the event. However, she was unable to take part this year due to health issues.

“There are few living people remaining who were themselves victims of repression, but either their descendants or concerned citizens come instead. A diverse array of people come. They get in a long line, and each one wants to participate,” Alexeyeva said.

“There were no repressed people in my family, but I went each year to read those names because I am not indifferent to the fate of my compatriots who were subjected to repression. Naturally, people remember those events because we had such mass repression, the likes of which have never been seen in any other state in history. We have suffered the most,” she said.

The memory of a nation

According to historian and journalist Nikolai Svanidze, this is a very important event for Russians, as it behoves them to remember not only the heroic, but also the tragic pages of their history. “There is no victory without tragedy. The Great Patriotic War did not just consist of taking the German Reichstag.

These recollections are very important for us because this is national memory and culture. Demonstrating this memory of our ancestors commands respect for us. It means that the people take their memory very seriously,” he said.

Walking in the GUALG’s shadow: A trip to the arctic city of Vorkuta

According to a recent poll whose results were made public on Oct. 29, almost half of Russians believe that a return to Stalin-era repressions is likely within their lifetime. The poll, conducted by the state-run Public Opinion Foundation and titled "Mass Repression in the Soviet Union," analyzed the views of the Russian public on Soviet-era repression.

Svanidze is convinced that demonstrations like the one organized by Memorial could be even more official if the state leadership gave them more attention.At the moment, another project to remember the repressed is in the planning stages. It is called ‘The Last Address’,” Cherkasov said. Homeowners have granted permission to install plaques containing the names, professions, and dates of birth and death of people who lived in their building and were forcibly removed from there, never to return.

However, Memorial is currently facing closure after the Justice Ministry filed a lawsuit with the Supreme Court on Oct. 10, calling for the liquidation of the organization.

Cherkasov told RBTH following the filing of the lawsuit that he believes the decision is politically motivated and has nothing to do with his group’s refusal to register as a foreign agent. “The government should not interfere in the activity of public organizations and manage them by allocating state grants,” Cherkasov said. The organization is due to appear in court on Nov. 13.