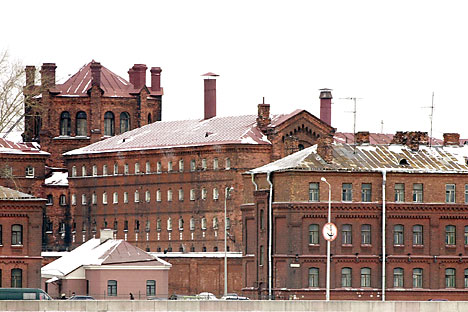 Inmates will be relocated from Kresty to Kresty 2, Europe’s biggest prison. Sourse: TASS.

Inmates of St. Petersburg’s infamous Kresty jail will soon be moved to a comfortable new block outside the city, which will be Europe’s biggest prison. What future awaits the famous cross-shaped buildings of Kresty and what stories do their walls hold?

In early 2016, inmates of the famous St. Petersburg jail, the Kresty remand prison, will move to a new building in the suburb of Kolpino, 20 miles from the city, where Europe’s biggest detention center, capable of housing 4,000 people, is being built.

The new remand prison will become the biggest not only in Europe but in the whole world. It will be like a small town, with all the necessary infrastructure: residential quarters, religious buildings, sports facilities, a hospital, workshops, and even a hotel – for relatives and visitors.

Light and comfort for prisoners

Gennady Korniyenko, head of the Russian Federal Penal Service, told RBTH that the local government had decided to move the prison out of the city center with an eye on the 2018 World Cup, in which St. Petersburg will be one of the host cities.

“The problem is that the [old] prison is situated in the city center. Ahead of the FIFA World Cup, the city administration has asked us to relocate the prison,” said Korniyenko.

The new remand prison has become known as Kresty 2. It, like the old prison, will be built in the shape of a cross, making it easier to guard the inmates.

Kresty 2 is the first remand prison in Europe to be fitted with special lifts for transporting inmates. One will be able to move between all the buildings without going outdoors. Another novelty engineering decision is that there will be no watchtowers. “The security system is fully electronic,” Korniyenko explained.

Rooms in the new prison block will be full of light. In line with European standards, a cell for three people will have an area of about 100 square feet. Walls will be painted a soft pistachio color, aimed at promoting inmates’ psychological comfort.

It has not yet been decided what will happen to the old prison building in the city’s historical center. The city administration has proposed turning it into a creative cluster, a venue for artistic projects, workshops and exhibitions. “That is necessary for the physical and moral revival of this part of St Petersburg,” said Irina Babyuk, head of the city committee for investment and strategic projects, in an interview with online publication The Village.

Kresty’s future is to be decided by the owner of the building, the Federal Penal Service. According to Korniyenko, no decision on the old Kresty building on the embankment of the river Neva has yet been taken, but there are numerous options. In any event, Kresty is listed as an architectural heritage site and therefore cannot undergo any significant restructuring.

Built by prisoners for prisoners

The Kresty prison was built in 1892 with using prisoner labor. Architect Antonio Tomishko designed its blocks in the form of identical crosses. They were built of red brick in the pseudo-gothic style. Kresty became Europe’s biggest and most modern prison: It had electricity, hot-water heating, and ventilation. It was not unusual for prisoners to have their first encounter with electricity there.

Before 1917, alongside ordinary criminals, Kresty also housed revolutionaries and political figures, representing the full political spectrum: from liberals to Bolsheviks. In the 1930s, many of the inmates were victims of Stalinist purges. Prisoners in solitary confinement would have to share a cell of just 10 square feet with 15-17 people. The list of famous Kresty inmates included historian Lev Gumilev and future marshal Konstantin Rokossovsky.

There have been several attempts to break out of Kresty. Inmates have tried to recruit security guards, forged police identity cards with the use of newspaper clippings, and even made replica guns out of bread. In 1991, gangster Maduyev tried to escape with the help of a female investigator who fell in love with him and passed him a gun. However, their plan failed and the woman was sent to prison for seven years. A film was even made based on the story, called Prison Romance.

Kresty’s best-known prison break attempt was the so-called ‘1992 riot’. Yury Perepelkin, who had been sentenced to death, hatched a plan to escape through a recreation yard on the roof of one of the buildings and, should that fail, take several guards hostage. He talked six other inmates into joining in the plan: They too faced either the death penalty or long prison terms, so had nothing to lose. The conspirators planned to carry out their attempt on 23 February, which in Russia is a public holiday honoring the country’s military. In addition to the holiday, security guards were further distracted by a birthday party thrown by one of their colleagues, Valentina Avakumova.

The plotters’ attempt to escape through the roof failed: They were spotted from a watchtower and the alarm was raised. Then they took two security guards, including Avakumova, hostage and demanded money and an aircraft in order to fly abroad. The developments were followed by the whole of the city, with crowds of journalists gathered at the prison gate. Negotiations led nowhere, and were followed by an order from Moscow to storm the prison. In the end, three of the conspirators and one of the hostages were killed.

This year, former trapeze artist Alexander Pokrovsky managed to escape from Kresty, making use of his skills: He jumped out from the fourth floor, crawled under the barbed wire and ran away.