Reports that never were: The Soviet silence on the fall of the Berlin Wall 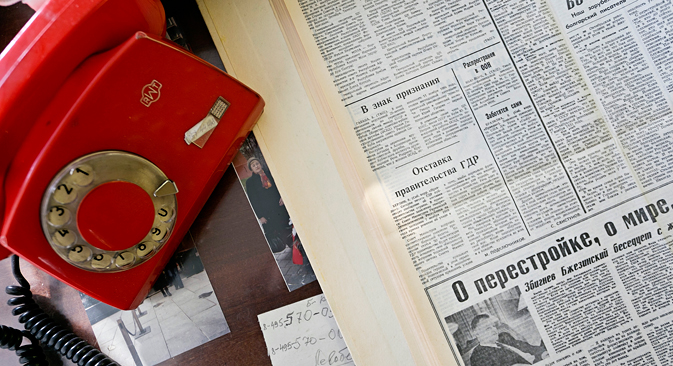 When the Berlin Wall came down and citizens of East Berlin began swarming into the west on Nov. 9, 1989, Soviet newspapers maintained a steadfast silence, and continued to avoid the issue for the next few days. However, careful readers would have understood from the careful wording of several reports that dramatic changes were taking place in East Germany.

On Nov. 9, 1989, the world press reported that the wall that separated Berlin into western and eastern parts had been demolished. However, Soviet papers failed to report the news. At the time, Soviet people could learn about the fall of the Berlin Wall only from rumors or subtle hints that managed to ‘leak’ into the national press.

A number of national papers did not reach the newsstands that day. The missing titles included Moskovsky Komsomolets, Sovetskaya Rossiya, Komsomolskaya Pravda, and Trud. Only two main national papers – Pravda and Izvestia – came out on the day the Berlin Wall came down.

However, they too were conspicuous in their failure to mention the fall of the Berlin Wall, though they did report on the domestic political situation in the German Democratic Republic (GDR), or East Germany, as it was widely known in the West.

Reading between the lines

“Changes in the GDR” was the headline of a piece by Pravda’s Berlin correspondent Mai Podklyuchnikov in the Nov. 9 issue of the paper that reported that the East German government had resigned. Podklyuchnikov quoted a statement issued by the GDR Council of Ministers: “We appeal to all our citizens who are considering leaving the republic to think again.”

A perceptive reader could conclude from that statement that GDR citizens had got an opportunity to leave the country, which meant that the borders were open, and by extension that the Berlin Wall was no more.

A hint about the actual state of affairs could be found in the Nov. 11 issue of Pravda. An article headlined “Visit interrupted” reported that Helmut Kohl, the chancellor of West Germany, or the FRG (Federal Republic of Germany), had interrupted his visit to Poland and returned to Bonn for 24 hours “due to the dramatic situation developing on the border between the two Germanys.”

West German interior minister Wolfgang Schäuble said that “the FRG intended to continue receiving all Germans wishing to move to the FRG” but asked GDR citizens “to give serious consideration to their decision to leave the country because they would then have to spend a long time in constrained living conditions.”

Between Nov. 10 and Nov. 20, Pravda continued to cover political events in the GDR and FRG, but none of the articles mentioned the wall. At the same time, a dispatch by the above-mentioned Podklyuchnikov in the Nov. 12 issue of the paper reported that East Germans were moving to the west en masse and handing in their Socialist Unity Party of Germany membership cards.

Finally, on Nov. 14, the Moskovsky Komsomolets newspaper joined in the coverage with a news-in-brief piece reporting that GDR border guard troops had been issued an order that “they should do everything necessary to assist the orderly and smooth implementation of the new rules regulating movement across the border between the GDR and the FRG and West Berlin”.

In the meantime, November issues of Komsomolskaya Pravda, Trud, Sovetskaya Rossiya, and Moskovskiye Novosti had carried no reports about this. On Nov. 10, which was marked in the USSR as the professional holiday of the police force, the papers were full of glowing reports about Soviet police officers but did not say a word about the Berlin Wall.

Pravda, but not all of it

What reports did TV and radio carry on the day? In a recent interview with France 2’s Laurent Boussié, ITAR-TASS correspondent Alexei Golyayev, who used to head the news agency’s European section, said: “On Nov. 9, Soviet radio and television carried only one brief report on it, consisting of just three lines.”

One could venture a guess that the ban on reporting the events in Berlin came directly from the country’s leadership. For comment, we approached the Pravda newspaper, which still exists, though it ceased being the country’s main daily a long time ago.

According to Pravda staffer, Nikolai Kozhanov, practically none of the journalists working for the paper in 1989 are on staff today. However, Kozhanov doubts that there was a “prohibitive” directive, let alone in writing.

“Pravda journalists have always had a strong political sense. And, of course, when the news came of the fall of the Berlin Wall, they were in no hurry to print it. Those developments in effect signified the collapse of the socialist camp and reporting them would have meant recognizing the fact of the collapse. I think our journalists were hoping that things would sort themselves out somehow,” says Kozhanov.

According to him, Pravda, the main newspaper of the USSR Communist Party, was very careful about covering events that could do damage to the reputation of the ruling regime. “For example, after Stalin’s death in 1953, there were large-scale workers’ strikes in the GDR.

Things went so far that troops had to be brought in to break the protest up. Yet all that Pravda reported at the time was that there were minor protests by workers,” says Kozhanov. Nobody wanted to let Soviet people know that German workers had rebelled as it could have provoked similar unrest in the USSR.

“One should not think that Pravda’s correspondent in Berlin did not know what was going on,  he continues. “In cases like these, a correspondent had to write a ‘closed letter’ to be sent not just to the paper but straight to the party’s central committee. That letter contained a detailed account of the real state of affairs. It was then that party functionaries decided how the Pravda newspaper would cover the story.”