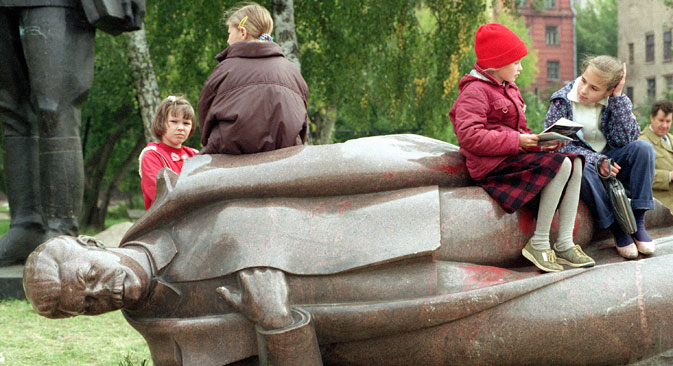 According to a Levada Center survey, 49 percent of Russians have a generally positive opinion of Stalin. Source: AP

Russia's supreme court is preparing to examine the lawsuit filed by the Ministry of Justice requesting to liquidate Memorial, Russia's first organization dedicated to preserving the memory of Stalin's repressions and victims. RBTH reports on who else is telling the truth about the past and why the figure of Russian dictator Joseph Stalin is still popular among Russians.

On Oct. 29 every year, a mass commemoration takes place in central Moscow in front of the Lubyanka, the infamous former NKVD and KGB headquarters, to honor the vast numbers of innocent Russians who perished during the vicious purges of the Stalin era.

Called "The Return of the Names," the event is held on the eve of the Day of Remembrance of the Victims of Political Repressions. The ceremony is so-named because any passer-by can assist in reading out loud the names of people who were executed during the years of Stalinist repressions. The aim of the event is to reawaken the memory of the hundreds of thousands of Russians who were shot in the 1930s, mostly on false charges.

The Return of the Names is just one of the initiatives organized by Memorial, Russia's oldest historical and educational organization. Memorial was founded in the 1980s under the slogan "The truth about the past for the sake of the present and the future" and from the very beginning it aimed to raise awareness about political repressions.

In 1991 a human rights center of the same name was created within Memorial. Since then, along with immortalizing the names of the victims of the Great Purge of the 1930s, Memorial activists also defend human rights. They monitor situations, identify rights violations, bring them to public knowledge and seek legal protection for the victims.

Yet in Oct. 2014 the Russian Justice Ministry unexpectedly appealed to the Supreme Court with a lawsuit against Memorial, requesting that the organization be closed on the grounds of "absence of activity."

The nature of Memorial’s structure made it an easy target: Founded as a result of the unification of a few dozen regional organizations, the group, known officially as the all-Russian Memorial Organization, does not have a clear vertical authority. This is because not all regional affiliates of Memorial are registered as branches of the all-Russian Memorial and their activity is not reflected in official documents - providing the Justice Ministry with grounds for filing a lawsuit to dissolve Memorial.

Members of the public were outraged by the possibility of the liquidation of the oldest organization devoted to disseminating information on the victims of Stalin's repressions. Mikhail Fedotov, Director of the Presidential Council on Human Rights, told the Gazeta.ru publication that "Memorial's liquidation will significantly damage the image of the Russian government." For now the Supreme Court has postponed examining the case until December.

Part of the reason for the problems Memorial is suffering lies in the ambivalent attitudes toward Joseph Stalin in Russia. Despite the obvious crimes of the Stalinist regime, many Russians consider the dictator a wise leader who governed the country with an iron fist, but also justly. According to a 2013 Levada Center survey, 49 percent of Russians (as well as citizens of the three former Soviet republics in the Caucasus (Azerbaijan, Armenia and Georgia) have a generally positive opinion of Stalin. Eighteen percent of Russians even expressed a desire to live under such a leader.

According to Yan Rachinsky, co-president of the Memorial Human Rights Center, “the issue is not so much the cult of personality of Stalin as the cult of government. The cult of leader will be insurmountable while in the people's minds the abstract greatness of the country is more important than the wellbeing of the citizens, which, I think is the main criterion for a government's success."

The Soviet years, in Rachinsky's view, taught society to think that the government is more important than the individual and thus, in thinking of the greatness of the USSR, people would forget about the cost of such greatness.

Sociologist Olga Kryshtanovskaya, however, believes that the figure of Stalin is a more complex issue. "In the eyes of the pro-Western intelligentsia, Stalin first and foremost is a tyrant and repressor, but the people remember him as the author of industrialization, as a great achiever, as the victor of WWII," explains Kryshtanovskaya. "Both facts are correct, which is why there are contradictory viewpoints. No one will defend Stalin by saying that repressions are good, but the truth is multifaceted - Stalin was not only a dictator."

Not fighting on its own

Although Memorial is the largest structure in Russia that deals with the issue of de-Stalinization, it is not alone. There are several museums in the country dedicated to the history of political repressions, the biggest of which is the Gulag Museum in Moscow. The museum has an enormous collection of documents on repression, objects belonging to internees, and exhibits telling the stories of thousands of people who became prisoners in the Stalinist system.

Another museum is named in honor of Andrei Sakharov, the famous Soviet scientist who became a dissident and human rights activist. One of the center's objectives is "to create a historical memory of Soviet totalitarianism and resistance to bondage." It often organizes exhibitions dedicated to the memory of the victims of the 1930 repressions. Like the Gulag Museum, the Sakharov Museum closely collaborates with Memorial.

In the 1990s a law was enacted "On the rehabilitation of victims of political repressions" and a presidential committee was established to monitor its enforcement. In accordance with this law, each person who "became a victim of the arbitrariness of the totalitarian state" has the right to have his good name rehabilitated, either during his or her life or posthumously.