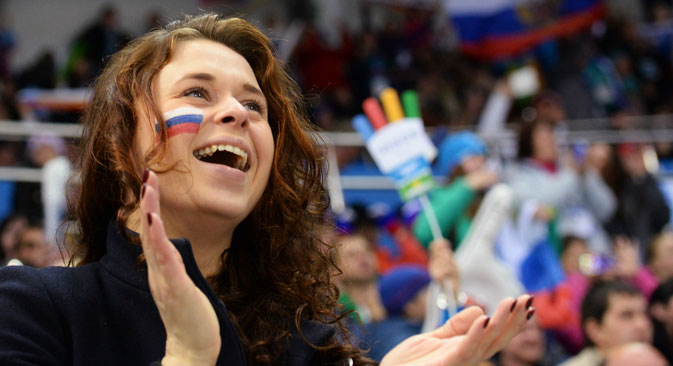 According to recent polls conducted by sociologists at the Russian Public Opinion Research Center (VCIOM), 76 percent of Russians are happy and only 17 percent are unhappy. The number of happy people has only slightly decreased in the last six months. Accoprding to the statistics, the family is a source of contentment for Russians, while material difficulties make them unhappy.

Sanctions may be biting, the ruble may be enduring a deep slump and inflation may be just around the corner, but Russians remain relatively content. According to a poll published by the Russian Public Opinion Research Center (VCIOM) on Dec. 8, 76 percent of the Russian population considers itself happy. The Happiness Index has only slightly decreased - from 64 to 59 points - since March 2014. Young people are the happiest (86 percent), while 64 percent of people of retirement age consider themselves happy, and 61 percent of poorly educated Russians are happy.

Director of Socio-Political Studies at VCIOM Stepan Lvov told RBTH that the current statistics are not as important as their dynamic over a 10-15-year period. “The dynamic of moods illustrates the state society is in, and conclusions are made on the basis of that,” he explained.

“For us, the Happiness Index is one of the key characteristics of society. We can talk about social processes based on that data. Besides happiness, we ask questions about social well-being. Happiness is a generalizing indicator – you can be displeased with politics but consider yourself happy because all is well at home,” Lvov explained. Observing statistics from past years, it appears that Russians felt at their worst in the 1990s, while 2011 was their best year.

The most interesting responses to the survey were those indicating what makes Russians happy. According to the respondents, family is the primary cause of joy. Forty percent of Russians indicated family as the number one cause of happiness, while another 14 percent said their health made them happy. Only every tenth Russian attributed his or her happiness to a good job, while only 4 percent said they derive happiness from a high salary.

According to Lvov, this is no surprise since Russian society is mostly oriented towards personal relationships: “Despite the opinion that we don’t quite have the traditional way of life we had before, Russians actually value that way of life. Our other polls show that social life comes in second place after family. Economic and political roles are much less meaningful than personal roles,” the sociologist explained.

Putting Russia in its place globally

But according to an October report by the Pew Research Center’s Global Attitudes Project, people in advanced and emerging economies are considerably happier with their lives than those in developing economies. Israel, the U.S., Germany, and the UK stand out as the happiest among advanced economies, with roughly six in 10 or more saying they are near the top of life’s ladder (75 percent, 65 percent, 60 percent, and 58 percent, respectively).

In 12 of the 24 emerging markets, meanwhile, at least half rated their life satisfaction highly. Latin American publics are the most content, with roughly two thirds or more in Mexico (79 percent), Venezuela (74 percent), Brazil (73 percent), and Argentina (66 percent) saying they are doing well. In this listing Russia gets 43 percent, and Ukraine 23 percent. Looking back on PEW surveys, one trend is clear – life satisfaction has grown substantially in Russia in the last few years, from 19 percent in 2002, to 23 percent in 2007, to the current 43 percent.

Criteria for politics and economics

Tatiana Karabchuk, deputy head of the Laboratory for Comparative Social Research at the Higher School of Economics in Moscow, agreed with Lvov’s assessment. According to her, the Happiness Index is one of the primary indicators “that is viewed by world organizations and government politicians in particular, which characterizes the state of affairs in a country.”

According to Karabchuk, “it is equally as significant as GDP” and is “important for explaining social unrest, protests, and more.” According to her, “the state of the people needs to be measured constantly to understand where it is moving. It is enough to measure it once a year, but if events in a country unfold as they are here now, there will be fluctuations every month.”

Telling pollsters what they want to hear?

Read more: Why Russians are delaying tying the knot

However, Anna Varga, head of the Association of Family Psychologists, expressed skepticism over the family values listed in the polls. “The answer about family is the safest answer Russians can give,” says Varga, explaining that “people thereby demonstrate loyalty to the events occurring in the country: ‘Is everything okay with you?’ ‘Yes, it’s fine.’ ‘Why?’ ‘I have a family and children.’

“Happiness is a fleeting and transient state. When a question is asked about happiness, you get the socially acceptable answer in social terms. The Happiness Index is a very doubtful category,” Varga said.

According to Varga, in Russia it is important for the respondent to understand to whom he or she is addressing the answer to the question about happiness – a boss or a peer. “If it’s to a boss, the answer will be ‘Thanks, I’m happy.’ If it’s to a peer, the answer will be that everything is bad, because the respondent is afraid of being envied or harmed. It’s sort of a defense mechanism to protect yourself,” she said.

In Varga’s opinion, the only conclusions that can safely be drawn from the index are how well developed Russians’ survival instincts are. “We’ll tell you what you want to hear and explain it in a safe way,” she explained. “The fact is that most of the population is descended from serfs, and they were always afraid of potential punishment and learned to adapt from generation to generation. The higher the level of authoritarianism in a country, the more socially acceptable answers you will get about everything,” she concluded.

Click to watch the video: Expectations for Christmas and New Year