In it together: How communal apartments shaped the outlook of generations 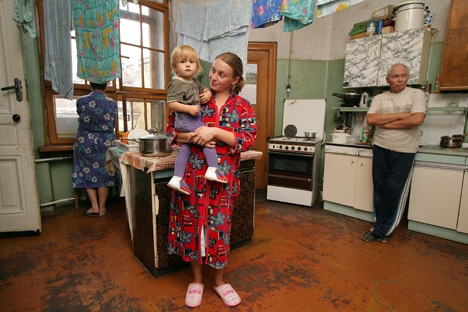 The kitchen in a modern communal apartment in Moscow. Source: TASS

Communal apartments, where strangers lived as one big family, shaped many generations of Soviet and Russian citizens, and continue to exist even today. The lack of a private life, a striving to dole out rights and responsibilities equally, snitching, and a willingness to help one’s neighbors were all characteristic of an upbringing in a communal apartment.

Communal apartments are a unique Russian phenomenon. They first appeared after the revolution in 1917, when residential real estate became public property. The authorities began to divide up the apartments of wealthy citizens into smaller units in order to solve the chronic housing shortage brought on by the country’s rapid industrialization, which attracted many people to big cities. During the chaotic period of the 1920s, many peasants were also forced to seek shelter in cities in order to survive as collectivization robbed them of a livelihood. Securing a job at a factory or institution meant that they could get a room in a communal apartment.

An adult was eligible for about 10 square meters, and a child was eligible for five (these regulations changed later). The peasants of yesterday were the new neighbors of the pre-revolutionary intelligentsia; kitchen staff started sharing bathrooms with university professors. This lifestyle may not have been easy, but it adhered to the official ideology of the time, which rejected class differences.

The joys of communal living

The entrance to a typical communal apartment, or kommunalka, had several doorbells with the names of the residents listed next to them. The hallway housed several electricity meters, because the residents paid their bills separately. There were no shared closets or hangers - residents kept their clothes and shoes in their rooms.

Marriage? No thanks, I’m too busy: Why Russians are delaying tying the knot

The shared hallway had doors that led to the residents’ individual rooms, and there were separate doormats in front of each door. The hallway also housed bicycles and skis. There was a shared telephone (separate phones in rooms were a rare occurrence). The bathroom had several basins for washing and several pieces of soap. The residents made sure that everyone used separate soap, as well as separate toilet seats. There is an old joke about a communal apartment in which a woman catches a man peeking in while she is taking a bath. The man exclaims, “I’m not looking at you, I’m trying to see whose soap you’re using!”

As culture expert Ilya Utekhin pointed out in his 2001 book Sketches of Communal Living, the bathroom often had signs that read “Don’t throw toilet paper in the toilet,” “Clean up after yourself,” or simply “Don’t steal!” The signs looked like they belong in public places, like offices or cafeterias. Essentially, communal apartments were also public spaces.

All apartment residents took turns cleaning the common area of the apartment according to a schedule that hung in the hallway. The residents all chipped in to fix the circuits and piping and to take care of other basic needs. Not participating in these communal efforts meant that you could ruin your relationship with the neighbors, which would make life in the apartment unbearable.

This description still holds true for many surviving kommunalki today, in which little appears to have changed in the last 30 or 40 years.

‘My neighbors know who came over yesterday’

Residents frequently met in the kitchen while cooking and washing dishes. They held meetings here in order to resolve issues and discuss the behavior of individual residents who were causing trouble or living an “incorrect” lifestyle.

“My neighbors know who came over yesterday. They want to know who came over the day before yesterday,” sang the rock star Fedor Chistyakov in his song Communal Apartments. Eavesdropping, rumors, and jealousy were always present in communal apartments and served as grounds for year-long conflicts. These conflicts sometimes had pretty drastic outcomes, such as a wire stuck in a bar of soap or washing detergent mixed in with soup.

However, apartment residents were generally able to get along and helped one another.

Residents babysat each other’s children and took care of senior citizens, and would help their neighbors find work or loan them money when times were tough. Sometimes, when neighbors got along particularly well, they would even invite a mother’s child for a sleepover when her husband came back from a long business trip. Communal living encouraged not only social responsibility, but also mutual assistance.

The older generations could mentor younger residents. Irina Kagner, who has lived in communal apartments in Moscow for a long time, recalled, “There were pre-revolutionary high-ranking officials, but they had to share space with others. So that’s how they lived – both the intelligentsia and the working class. Everyone listened to the intelligentsia, looked to them for advice on how to live and develop a sense of style. Children saw how these people lived and, when they grew up, they had a better understanding of culture.”

Communal living is here to stay

Large-scale construction of apartment blocks began in the USSR in the 1950s, which allowed many people to obtain separate housing. For many people, owning their own apartment was an unimaginable concept.

“My grandparents lived in a communal apartment in Sretenka for a long time, where they shared space with 40 people,” recalls Marina from Moscow. “When they finally got their own apartment, my grandfather sat on the kitchen floor leaning against the wall, enjoying the silence for hours.”

The real break-up of communal living took place in the 1990s, when wealthy businessmen were ready to buy each family a separate apartment in exchange for real estate in the city center. Still, not all communal apartment residents resettled. Currently, communal apartments make up 2 percent of the total housing stock in Moscow. According to the Moscow Housing Policy Department, there were about 91,000 communal apartments in Moscow in 2011, although the exact number is not known.

However, the real center of communal living was St. Petersburg, which, as the capital at the time of the revolution in 1917, had far more large bourgeois apartments suitable for dividing up and redistributing among workers and peasants.

According to official data cited by Ilya Utekhin in Sketches of Communal Living, even as late as 2001, communal apartments comprised 35-38 percent of housing in central St. Petersburg and over 10 percent of the city’s total housing stock. Even today, the city has more communal apartments than any other city in Russia and it is not unusual to meet somebody who lives in a kommunalka.

Moreover, communal apartments continue to appear, albeit in a different form. They are frequently the result of divorced couples dividing up their property. Many people in Moscow and St. Petersburg opt to rent out rooms in their apartments, living off the rent money and creating a new generation of communal housing. This means that communal apartments will be around for a long time.