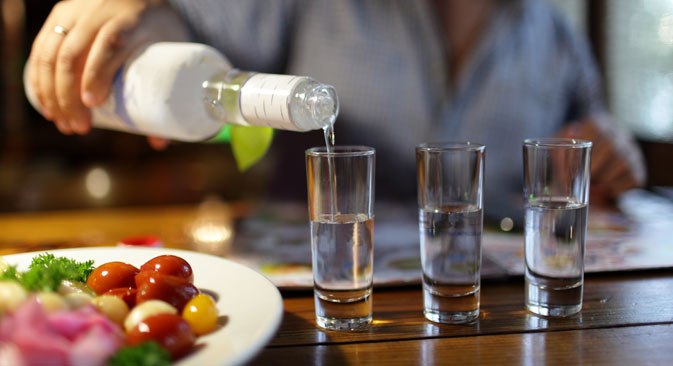 Tea is far more popular in Russia than vodka but still... Source: Shutterstock

Psychologists and sociologists have identified several bad habits typical of Russians: smoking, swearing, drinking a lot of tea, and even the habit of passing the blame. What do the statistics say and what are the explanations behind these common indulgences?

The most widespread bad habit in Russia is smoking. In a poll conducted by the All-Russia Public Opinion Research Center (VTsIOM) in July 2014, some 35 percent of respondents admitted that they smoke, with a further 13 percent saying that they used to smoke. The number of male smokers is three times that of women. One in five smokers has at least a packet a day. “For many people, smoking is a way of dealing with stress and an opportunity to relax,” says psychologist Yelena Galitskaya.

Another widespread bad habit is swearing. In a survey conducted by the Public Opinion Foundation pollster in March 2013, 61 percent of those polled said they regularly hear foul language from people they know. “Swear words are used to express a variety of feelings, from acute pain to joy at good news. Sometimes only a swear word can allow a Russian person to convey the whole gamut of emotions they are feeling,” Galitskaya continues.

Contrary to the view that the most popular bad habit in Russia is drinking alcohol, Russians surveyed view it as more of an illness than a habit. Nevertheless, according to a Public Opinion Foundation poll conducted in March 2014, Russians are suspicious of and even often indignant at people who do not drink at all. In the same poll, 68 percent of respondents confessed that they drink alcohol from time to time.

In fact, tea is far more popular in Russia than vodka. According to a 2014 RosIndex study conducted by Synovate Comcon, which forms part of the international research network Ipsos, over 90 percent of Russians drink tea. They drink it with meals, to warm up, or with something sweet as a separate meal. However, excessive consumption qualifies it as a bad habit.

“My family lives in the provinces. There, ‘to have some tea’ usually means drinking seven to eight cups at a time, three-four times a day,” says Natalya Zimina. “It is a Russian tradition and any talk that in such amounts tea is not good for you falls on deaf ears.”

In an interview with RBTH, clinical psychologist Maria Kiselyova named several other bad habits typical of Russians. For instance, Russians have a tendency to shift the blame for what has happened onto somebody else. The scapegoat may be another person, the state or life in general. Once a ‘culprit’ has been identified, they find it easier to cope with a problem.

“We tend to think that everything should be done for us,” says Kiselyova. “In fact, not that much time has passed since the abolition of serfdom [which occurred in Russia in 1861 – RBTH], when indeed very little depended on a person and everything was decided by their master or the tsar. We still often think that nothing depends on us.”

There are historical reasons for another typically Russian bad habit, that of offering advice. Parents traveling with their children on public transport often end up on the receiving end of a lecture on “how to bring up your children” from fellow passengers.

“In the past, people used to live in rural communes and the prosperity of the whole collective depended on how well people cooperated with each other and gave advice to each other,” Kiselyova explains. “This collective mentality remains in people’s subconscious, hence the compulsion to offer advice, even when nobody is asking for it.”

Yet another typical Russian habit is that of relying on ‘good luck’. Being an optimist, a Russian person, when calculating the worst possible scenarios, still always hopes that this or that situation will get resolved by itself. “Ours is a very big country that is rich in resources, - says Kiselyova.

“The climate here, albeit quite tough, is still not the most severe. That is why there is always a higher probability of surviving than, say, in Japan, which is frequently hit by natural disasters, or in Europe, where everything is very crowded and very competitive. There is a feeling that even nature is on our side, so we have this notion of ‘we’ll survive somehow.’”

Yet very few Russians are willing to give up their bad habits. In a poll conducted by VTsIOM six years ago, nearly 70 percent of Russians said that if a habit does not inconvenience other people, there is no need to give it up. “Overall, things are unlikely to have changed. Most likely, everything has remained the same,” says VTsIOM head Valery Fyodorov.