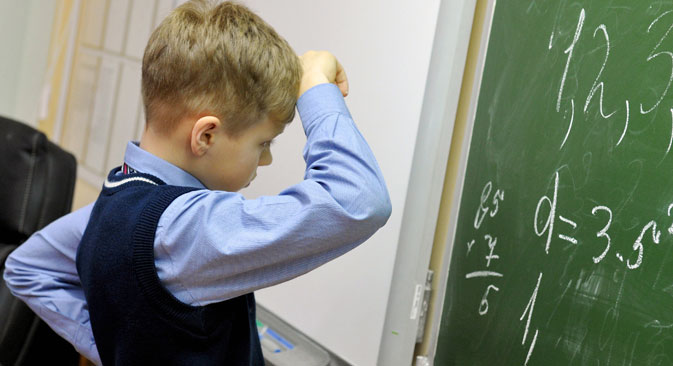 RBTH spoke to experts about the results of the National Study of Education Quality (NIKO), recently carried out in Russia. They illustrated the roots of the problems the country is experiencing with mathematics at school and explained why it is not worth relying on the international PISA assessments.

Russia's first ever large-scale study of mathematical knowledge among 5th-7th graders has confirmed concerns over pupils’ ability to count and solve math problems. According to the shocking results of the study, pupils "do not know how to count, how to solve text-based tasks, geometric and other kinds of problems, and how to work with information."

It was the first time that pupils in Russian schools had undergone such large-scale assessment in mathematics. At the end of October, 5th-7th graders in 500 schools, in 70 Russian regions took the test, organized by the National Study of Education Quality (NIKO).

According to the study, the ability levels of 20-50 percent of the students (depending on the region – RBTH) "are insufficient to continue education in mathematics and the natural sciences."

The results of the study say that, without addressing the gaps in these students' knowledge, a significant part of lessons taught in the higher grades will be ineffectual and the students will not even be able to pass the high school EGE finals, a standardized state exam.

Sergei Lando, head of the Mathematical Faculty at the Higher School of Economics in Moscow, believes that general school education is facing genuine problems, though "the real news,” says Lando, “is that we have received a more or less exact estimate of this disaster for the first time."

Lando says that mass checks were carried out in Soviet times, but their results were never made public and were never discussed, neither in the press nor in professional circles. Now, he explains, we are “slowly forming an idea, an idea that is close to reality, of what the middle schools are teaching, what they are able to teach and what they don't teach even though they should.”

Mathematics is taught in schools between grades 1 and 11. From first to sixth grade (7-12-year olds) it is a single subject; from seventh to 11th grade (13-16-year olds) it is divided into algebra and analysis, geometry, information and physics. It is essential to pass the mathematics GIA exam to enter 10th grade and to pass the EGE finals in order to graduate from high school.

Many general education schools have classes with more in-depth mathematical preparation. There are also schools specializing in physics and mathematics, as well as high schools where scholastic programs greatly differ from general education schools and help students enter math faculties at high-level universities, such as the Faculty of Mechanics and Mathematics at Moscow State University (26th according to the Academic Ranking of World Universities in Mathematics 2014), without additional preparation.

"I think that the root to this [the 5th-7th graders' problems with mathematics – RBTH] lies in the mathematics taught in elementary schools, including the complicated situation with the quality of the textbooks, problems with teachers and the extreme dedication to various reforms, such as the predominance of tests," says Vitaly Arnold, an IT teacher at the Moscow Southwest 1543 High School and director of the Moscow Center for Continuous Mathematical Education.

"For example," says Arnold, "several years ago certain 'experts' began teaching in schools that 2 x 3 is not the same as 3 x 2. That is, to the question "if 2 lumps of sugar are placed into each of 3 cups, how much sugar is used?" the answer is obviously 6 lumps. The equation 2 x 3 = 6 is correct, but the equation 3 x 2 is incorrect, because (in the opinion of those, I'm not afraid to use this term, pests) its answer involves cups, not lumps of sugar."

According to Sergei Lando, “the ability to count is an ability that should be developed in elementary school and the fact that students enter middle school without this ability says that these skills are not developed at an elementary level."

Should ratings be trusted?

There are several international ratings that measure student skills. One of the most prestigious is the Program for International Student Assessment (PISA), which is carried out once every three years.

Arnold, meanwhile, has at least three grievances against the PISA tests. Firstly, "the complete versions of the assignments remain a secret after the end of the assessment and the examples do not present a full idea," he says.

Secondly, he explains, “when asked ‘Who is responsible for the mistakes in the contents of the assignments?’ or ‘Have any of the expert mathematicians looked at these versions?’ the organization remains silent.”

He also adds that the organizers "do not react to substantial criticism from highly qualified and interested experts," pointing to analysis of IQ tests as an example.