Fire damages one of the largest libraries in Russia 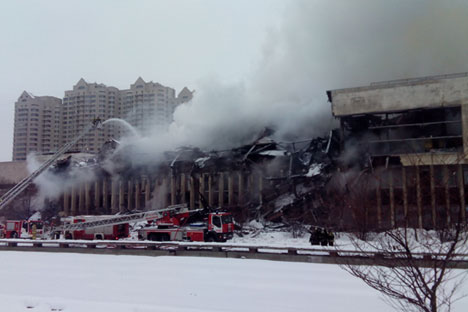 It took firefighters 25 hours to extinguish the flames in the three-story building. Source: Kokarev / Wikipedia.org

Researchers stunned by loss of rare documents and mourn one of Russia’s only functional libraries for humanities research.

Scholars had no lack of adjectives to describe the damage caused to social science research by the Jan. 30 fire at the Academic Institute of Scientific Information on Social Sciences (INION), Russia’s largest library of humanities. It took firefighters 25 hours to extinguish the flames in the three-story building, which has been damaged beyond repair. According to preliminary estimates, the library lost about 15 percent of its collection, which was estimated at 14.2 million documents.

Among the destroyed works were rare publications from the 16th-20th centuries, as well as unique United Nations documents. Works that were not destroyed completely suffered severe damage from smoke and water. The computer servers holding 3.5 million digital copies of the collection may also have been damaged. Additionally, the collapsed roof of the building has left many remaining documents exposed to the elements.

It will be difficult to determine exactly what has been lost since most of the library’s content had not been digitized and both card catalogues were entirely destroyed in the disaster.

Vladimir Fortov, president of the Russian Academy of Sciences compared the fire to the disaster at the Chernobyl nuclear power plant in terms of the effect it will have on the library and the research conducted there. According to Fortov, months or even years will pass before INION can be reestablished.

INION, whose collection is comparable in size and scope to that of the Library of Congress, offered more than just its collection to the community of Russian humanities researchers. The library also provided monthly reviews and reference texts on recently published foreign and Russian scientific works.

Mark Teeter, an American who has taught at both the Higher School of Economics and the Russian State University for the Humanities has worked extensively at INION and called the loss “enormous.” “Having used this library's unique resources – for my own dissertation and for a number of joint scholarly publications in the 1980s and1990s – I have an acute sense of just how great a loss this represents,” Teeter said. As part of a joint project between INION and the Kennan Institute in Washington, DC, Teeter produced two guides to the humanities and social sciences in the Soviet Union and the post-Soviet states.

Mikhail Davydov, a professor at the Higher School of Economics called the fire a "real shock." "This will have a big impact on my work, as well as on the work of many scientists in Russia. On Thursday I had ordered 15 books there… I'm speechless,” Davydov said.

The Ministry of Emergency Situations has not definitely determined the cause of the fire, but preliminary investigations indicate that the source was a short circuit.

Over the weekend, several Russian media reported rumors that the fire was a case of arson and that Moscow city authorities had plans to construct a business center on the library site.

However, in an interview with Russian daily Kommersant, INION Director Yury Pivovarov rejected this theory. According to Pivovarov, the land the library sits on and the institute itself are part of the federal government and the city authorities would have no access to the land whether the building was there or not.

“Therefore there is no sense in arson," Pivovarov said. A representative of the Moscow mayor's office also told Kommersant that the office had not received any applications for development projects on the INION location.

Pivovarov has already asked the Russian president for assistance in restoring the library and recovering what can be salvaged from the current building. In order to dry the materials damaged by water, a facility of equal size will need to be found as well as a way to transport the works to this new facility.

"This is a serious catastrophe, given the fact that other Moscow libraries do not work well," said Fyodor Uspensky, the deputy direct of the Slavic Department at the Russian Academy of Sciences. Uspensky said that the country’s main library, the Russian State Library, is not a comparable substitue for researchers because the "books are bestrewn in various, unsystematic collections."

Additionally, the Russian State Historical Public Library, which also houses collections important for research in the humanities, is currently closed for renovation. "Students and lovers of humanities are left without any centers now," Uspensky said. "I am completely at a loss."