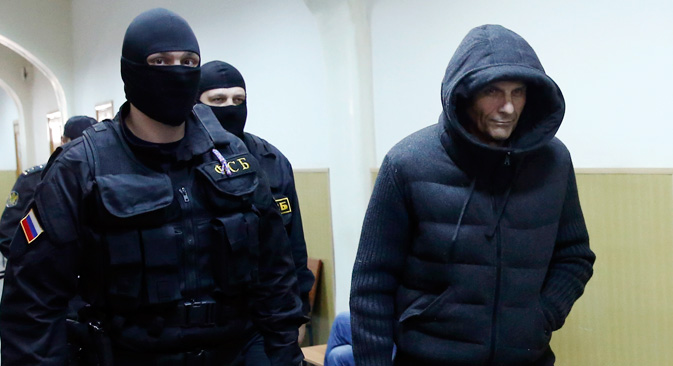 The governor of Russia's far eastern island of Sakhalin has been detained in connection with a bribery case and flown to Moscow where a court will consider his formal arrest. Source: Reuters

Alexander Khoroshavin has been charged with taking bribes in a case that could be seen as a warning to other officials.

Alexander Khoroshavin, the governor of the Sakhalin Region in Russia’s Far East, has been arrested along with three of his associates on suspicion of taking a substantial bribe. According to an investigation into Khoroshavin’s activities, the governor received $5.6 million for his part in approving a contract for the construction of a local thermal power station. Khoroshavin is only the second sitting governor to be charged with criminal wrongdoing in post-Soviet Russian history. The previous case took place in 2006).

"The fact alone that a criminal case has been launched against such a high-ranking official confirms the Kremlin's determination to fight corruption… there have never been and never will be untouchables in Russia," Russia’s Investigative Committee announced in a statement about the arrest.

On March 4, law enforcement authorities searched the government building of the Sakhalin Region as well as Khoroshavin’s official residence, dacha and apartment in Moscow. In the course of the investigation, the agents found large sums of money, as well as a large amount of valuables.

The same day, President Vladimir Putin criticized the Ministry of Internal Affairs for the lack of large-scale corruption investigations. Putin told the ministry’s collegium that it was if such cases “didn't exist at all.”

Rostislav Turovsky, a political analyst and expert in regional politics at the Higher School of Economics, interprets Khoroshavin's arrest as a warning to the entire gubernatorial corps from the center. "This is a model example of the fight against corruption," Turovsky said. "In Russia it is customary to make a loud warning so that others behave more quietly and more loyally."

Turovsky does not expect the Khoroshavin case to be the first of a large-scale anti-corruption campaign, however. He noted that one case is usually enough to act as a warning.

Khoroshavin, who was appointed to his position by Putin and approved by local officials in 2007, was considered to have good ties to Moscow. However, he had also received several signs that an investigation into his finances was likely.

Shortly before the arrest, the governor was criticized by the All-Russian People's Front (ONF) political organization, which noted that Khoroshavin had spent 850 million rubles ($13,750,00) on the renovation of the Sakhalin government building and 700 million rubles ($11,320,000) on PR activities. As early as 2013, the ONF had referred the case to Putin, who publically warned Khoroshavin about his activities.

"The signals sent by the ONF were obviously transmitted by the presidential administration," said Alexei Mukhin, director of the Center for Political Information, a Moscow-based think tank. "The ONF was concerned with the population's general opinion of the governor and his unfounded expenses." However, according to Mukhin, Khoroshavin was not considered to be at risk since similar activities are carried out in other regions.

The case could instead be tied to control of Sakhalin’s vast resources. The region contains the largest oil and gas reserves in Russia.

"There are not any precedents for high-level corruption in Sakhalin," said Mukhin. "On the contrary, the region is one of the most stable in the country.” In Mukhin's opinion, Khoroshavin’s arrest is the result of dissatisfaction with the amount of money flowing from Sakhalin to Moscow. According to Mukhin, the center was not satisfied with the region's budget policy and now the governor’s position will be filled with "a more loyal individual."

Some 43 percent of 1,630 respondents polled in 134 populated localities said corruption was worst in the traffic police, 39 percent said this about the police in general and 35 percent pointed the finger at the customs service. More than a third (38 percent) thinks that the Russian authorities will continue their crackdown on corruption but will have little success because "corruption is indestructible".