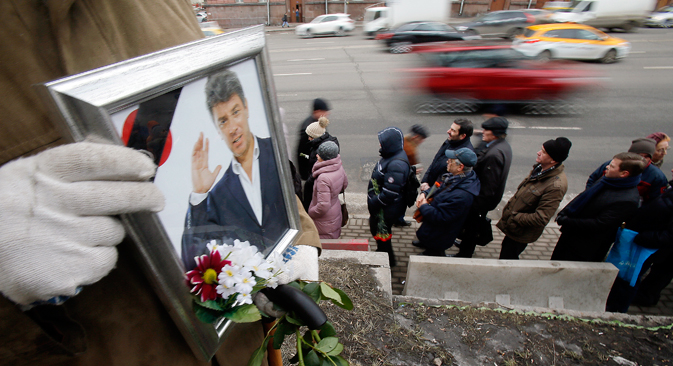 Experts say that conflict between Russia’s security services and the president of Chechnya, Ramzan Kadyrov, likely played a role in the murder.

New details in the Feb. 27 murder of opposition leader Boris Nemtsov have cast doubt on the claim of the investigators that Nemtsov was killed by followers of radical Islam because of his support for the French magazine Charlie Hebdo.

Russian daily Moskovsky Komsomolets (MK) has obtained photographs from surveillance cameras showing that the car in which the killer fled, according to investigators, the killer fled, began to regularly appear near the politician's home as early as September 2014, before the Charlie Hebdo tragedy, which took place in January.

Additionally, the primary suspect in the killing, Zaur Dadayev, has been described as “not very religious.” Dadayev’s mother told Russian news site RBC Daily: “Zaur was not an overtly religious man."

Dadayev, a former officer of Sever battalion of Russia’s Ministry of Internal Affairs (MVD) forces plead guilty to organizing and committing the murder, but later retracted his confession. In his retraction, Dadayev said that he made his initial statement under pressure from the authorities, who promised to release his friend if Dadayev confessed. Dadayev has also filed a complaint saying he was beaten during his questioning.

According to Vasily Panchenkov, the head of the press service of the Russian Interior Ministry troops, Dadayev was dismissed from his position at his`own request on Feb. 28, the day after Nemtsov’s murder. Dadayev was officially on vacation at the time of the murder and investigators are pursuing the possibility that Dadayev used his vacation time to prepare for the crime.

At the moment, four other men have also been named as defendants in the case – all of whom are Dadayev’s relatives and friends. Three of the men were detained during a special operation in Chechnya, while the sixth man blew himself up with a grenade during detention.

Georgy Mirsky, an expert on Islam and a senior researcher at the Institute of World Economy and International Relations, told RBTH that investigators are pursuing the “Islamic” theory because it is the easiest explanation.

"This is the most convenient version – no commissioners, the motive is clear, and that's the end of it," MIrsky said. "But I do not believe that these people were so sensitive that could take offense for their religion. Nemtsov talked very little about it.”

On his website Kashin.guru, investigative journalist Oleg Kashin said that the “Islamic” version of events as well as the information that Nemtsov was under long-term surveillanceimply that the Federal Security Service (FSB) knew nothing. But, he writes, “it is difficult to imagine that the special services were not aware of such a long-term operation."

Rather, Kashin believes the murder was part of an ongoing conflict between Chechen leader Ramzan Kadyrov and the security services. Kadyrov, who became president of Chechnya in 2007, is considered close to Putin.

"It is easier to believe that their [FSB's] passive role was deliberately passive to allow Kadyrov to expose himself, and take action on him in a high-profile manner after that," Kashin wrote.

"For the first time during the entire period of Putin's rule there is a sharp and open systemic conflict between Ramzan Kadyrov and federal security forces," Belkovsky said. "The security forces are now trying to convince the public that the killers come from Kadyrov's inner circle," he said.