Report: Euphoria over ‘return’ of Crimea has passed among Russians 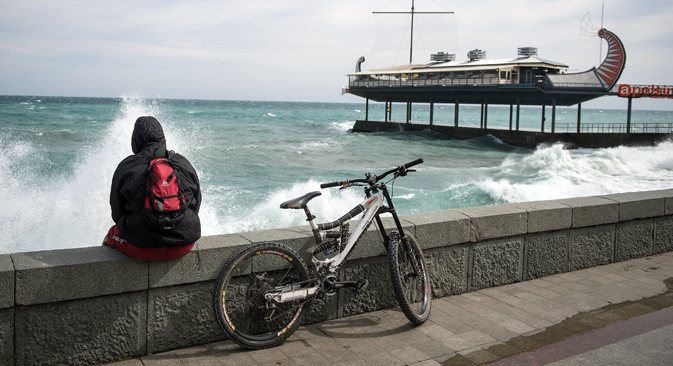 Although the awareness of the problems associated with the acquisition of Crimea has grown over the year, while people with higher levels of education and income have become less supportive of the decision taken by the leadership, this is no reason to speak of a trend to decrease support. Source: Mikhail Mokrushin / RIA Novosti

A new report suggests that the number of Russians who see the acquisition of Crimea in 2014 one year ago as a positive achievement is decreasing. The authors of the report believe that the reason for that is the fading of the initial euphoria over the "Crimean Spring." But political analysts say that this is a trend – a reassessment of last year's action by the authorities is underway in the country.

Russians still see the takeover of Crimea as a great achievement, but one year after the peninsula was incorporated into the Russian Federation, growing numbers are beginning to question whether the move was in the country’s interests, according to new research by a leading Russian pollster.

The new study by independent sociological research organization Levada Center, titled "Crimea and the Expansion of Russian Borders," shows that while the majority of Russians still believe that the acquisition of the peninsula was a great achievement whose positive effects will be felt in the future, the share of those convinced of this has fallen from 79 to 69 percent compared to last year.

In addition, more and more people are starting to believe that the events of the past year are instead indicative of a growing adventurism by the Russian leadership, which is seeking to distract Russians from social and economic problems (the percentage of Russians who believe this has increased from nine to 14 percent since March 2014).

A majority of citizens – 72 percent – believe that by behaving in such a way the country is asserting its interests in the post-Soviet space and returning to the status of a "great power" – yet this statistic has also fallen, down from 79 percent last year.

Researchers also found that more and more people are against the expansion of Russia’s borders (57 vs. 32 percent).

Return to a long-term trend

However, these fluctuations over the year have had little impact on the final conclusion of sociologists: "On the whole, no significant changes have happened during the last year," the deputy director of Levada Center, Alexei Grazhdankin, said in an interview with RBTH.

Although the awareness of the problems associated with the acquisition of Crimea has grown over the year, while people with higher levels of education and income have become less supportive of the decision taken by the leadership, this is no reason to speak of a trend to decrease support, says the sociologist.

"If any changes have occurred, they are linked with a decline in the euphoria that reigned among the population after the accession of Crimea. But it passed as early as last summer; no significant changes have been observed since that moment," says Grazhdankin.

However, Konstantin Kalachyov, head of the Political Expert Group, disagrees with this assessment. "This is a downward trend," says Kalachyov, who notes that while the euphoria has passed, "here there is also an overlap with the economic crisis."

"Obviously, the less money a person has, the less they wish to pay for any decisions made by the authorities," he says. In addition, the attitude to the Crimean issue will change as people start exploring the peninsula itself. "People who go to Crimea after Egypt and Turkey will be disappointed with the quality of service," he says.

However, sociologists argue that it is more correct to describe what is happening now as a return to the trend of previous years – it was 2014 that was an anomalous year rather than 2015.

"The accession of Crimea has somewhat reanimated the idea of restoring the Soviet Union, or, at least, the idea of integrating several republics into the Russian orbit," Grazhdankin says. That is why, in his opinion, the number of those opposed to the Russian expansion in 2014 was not so high (32 percent). 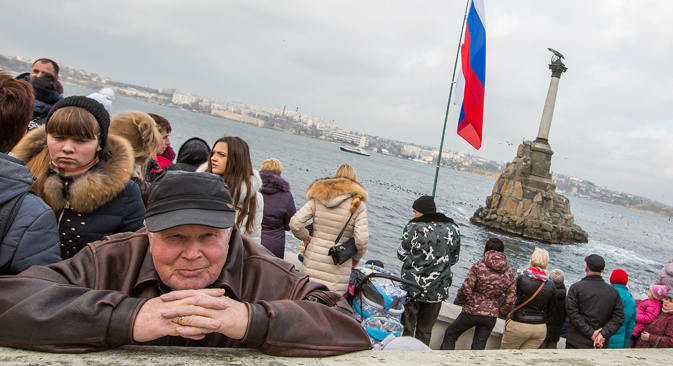 But the idea of the possible collapse of Ukraine has gained traction in the mass consciousness over the past year, says the sociologist. The study has shown that every third Russian has a positive attitude to the disintegration of Ukraine (in 2014, it was one in four).

"Right now, many commentators are broadly discussing this question in the Russian media. They believe that federalization, even if it means the disintegration of the country, will be the solution to the problems of Ukraine," Grazhdankin explains.

"People have found a new enemy; we are offended by the behavior of our 'younger brother' in relation to the 'older,' so we say, 'Let them fall apart,'" says Kalachyov.

But, in his opinion, this is a temporary situation. "Everything will change depending on Ukraine’s success in carrying out reforms. Remember how Russians treated the Baltic states in the 1990s; there was talk that the country was falling apart, that they wouldn’t survive without us," he says.