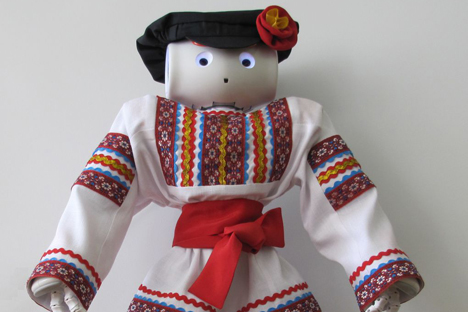 A working group at the South Ural State University in Chelyabinsk has taught a French android to teach the Russian language and sing songs. It is expected that the robot – it has been given the name Vanya – will be used to work with foreign students.

Dmitry Katsai, a research worker at the Instrumentation Engineering Department, and his colleague Yulia Polyakova from the South Ural State University's Institute of International Education in Chelyabinsk have developed software for Nao, a humanoid robot designed by the French company Aldebaran Robotics. The new technology allows the robot, christened Vanya, to serve as an assistant teacher of Russian as a foreign language. RBTH spoke to the "parents" of robot Vanya and found out how it can be used.

RBTH: How do students react to the robot?

Yulia Polyakova: Vanya helps to remove the language barrier and increase students’ motivation. It's more difficult for many to communicate with a teacher than with a robot, so Vanya helps to overcome the psychological barrier quicker. Students trust it more, feel less pressure than from a teacher and are more relaxed. This is an element of the game.

Dmitry Katsai: Foreigners perceive it as a living little man – it turns a lesson into a small show. They are very carefully trying to hear what it says. Accordingly, concentration is increased.

RBTH: What can you do with it?

YP: A foreign student who studies the Russian language must learn to read, understand both oral and written language, understand grammar, as well as be able to answer questions and respond to the situation. All this can be practiced using a robot. For example, Russian grammar is taught primarily through expressions and sentence patterns.

We often teach students how to behave on the street, in the city, in the library, in transport or in the dormitory. We can practice the same situations with the robot.

With Vanya, you can do various exercises – for instance, on the comparison of images and phrases: "Say correctly" or "Guess." With the help of the robot you can even introduce new vocabulary. Synonyms and antonyms are also very good to practice together with the robot, as well as grammatical dictations.

RBTH: Can the robot replace a teacher?

YP: Hardly. That's why we call him an assistant. We use the robot not for the entire class, but only for part of it. For example, for a phonetic exercise to practice a certain phonetic sound for 5-7 minutes. Its task, among other things, is to relieve the teacher. The robot walks through the audience and, for example, gives a dictation, while the teacher can switch to preparing the next part of the lesson at this time.

RBTH: Can an ordinary teacher work with the robot?

DK: We are making an assembly kit that can be easily filled with script content [the robot’s programming will include templates for various types of lessons that can be adapted by the teacher according to need – RBTH]. This will allow a language specialist rather than a programmer to work with the robot. To prepare for the lesson, it is enough for him or her to fill out plain text files containing commands.