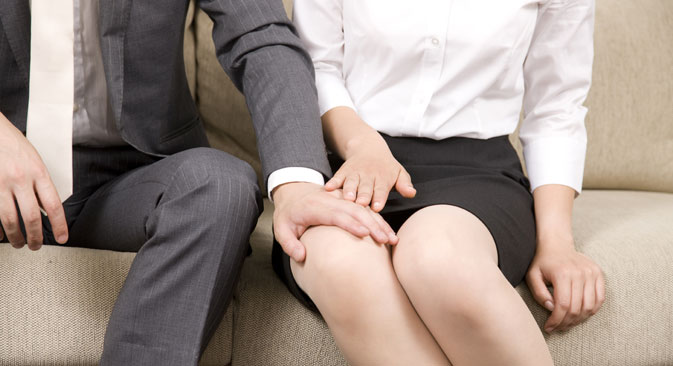 Women's magazines in Russia are full of articles like "How to awaken your femininity" and "How to get him to give you gifts. Source: Shutterstock

There is a prevalent idea in Russian society that men and women should behave according to some unwritten standards. However, it is the country’s women that are affected much more by discrimination. What kinds of problems does this create in daily life and how long is the road to gender equality in Russia? RBTH reports on the current situation in the country.

A recent tweet that accompanied the announcement of a text on sexism in the online publication Meduza caused heated debate among journalists over its use of a politically incorrect Russian term for women. The widespread public response to the episode showed that the issue of gender equality in Russian society is something of great concern to many ordinary Russians.

According to chief editor of the online-poster site Ezhikezhik.ru and columnist Svetlana Feoktistova, discrimination against women is commonplace in Russia. “Men allow themselves to use insulting expressions, engage in sexual harassment, and make dirty jokes, thinking that it is normal and that if a woman is offended, she lacks a sense of humor. There is a male primacy in work issues,” she says.

In Feoktistova’s view, such conditions came about as a result of the lack of respect Russians have for personal space and the observance of norms of social etiquette. “Historical factors are possibly to be blamed for this – serfdom and Soviet communal life,” she says.

For most women in Russia, this situation is not only one that they have grown used to, but even a comfortable one for them, says Feoktistova. Women's magazines in Russia are full of articles like "How to awaken your femininity" and "How to get him to give you gifts."

“It is plain to see that gender is used in order to achieve personal objectives. Millions of women in the country do not need feminism. And those few women who understand the depth of this problem and try to do something about it are ridiculed by both men and women," says Feoktistova.

Yelena Rozhdestvenskaya, a professor at the Higher School of Economics in Moscow, agrees with Feoktistova. "Women are inclined to compensate for inequality with privileges that give them the status of the 'weaker sex’,” the sociologist said in a conversation with the BBC. "For example, some tolerate sexual harassment at work if this guarantees them career advantages."

Surveys also indicate this attitude among the majority of women. Nonetheless, there are signs of progress. In early March 2015 the Russian Public Opinion Research Center (VTsIOM) conducted a survey and discovered that the situation regarding gender equality has improved.

Russians, first of all, speak of equality in education – 90 percent say they believe the sexes are level in this sphere (up from 80 percent in 2006). Over the past nine years, the proportion of those who think that women in our time have the same right to choose their profession as men has increased by 50 percent (from 48 percent to 76 percent), as has the percentage of those who think women have the right to receive decent remuneration (from 47 percent to 75 percent) and to participate in the political life of the country (from 48 percent to 74 percent).

The results of opinion polls are contradicted by statistics. According to state statistics service Rosstat, Russian women are still paid significantly less than men, earning an average monthly salary of 25,000 rubles ($440) compared to the 33,000 rubles made by the male half of the population.

Unequal conditions are also imposed on women when they want to take out a loan: Creditors operate on the presumption that they may fall pregnant and lose the ability to work, meaning they will be unable to pay the bank back.

Mari Davtyan, a lawyer at the Consortium of Women’s NGOs, says she has had to deal with the difficulties female entrepreneurs face in trying to obtain credit. According to her, Russian women do not even realize that their rights are being violated, but have the feeling that relations should not be the way they are.

“People have to start to deal with violence and harassment at work. Women face these things rather frequently,” says Davtyan. “There are complaints on the labor market about lower salary offerings. There are very many complaints from women who ‘had to leave’ work because of their pregnancy or do not receive benefits.”

Davtyan says that the biggest problem is that the authorities do not recognize at the official level the existence of problems related to gender. She said that in the Duma there are draft laws that could protect women, but they do not make it onto the agenda.

At the Duma Committee for Family, Women, and Children, they declined to comment on the situation regarding sexism in the country.