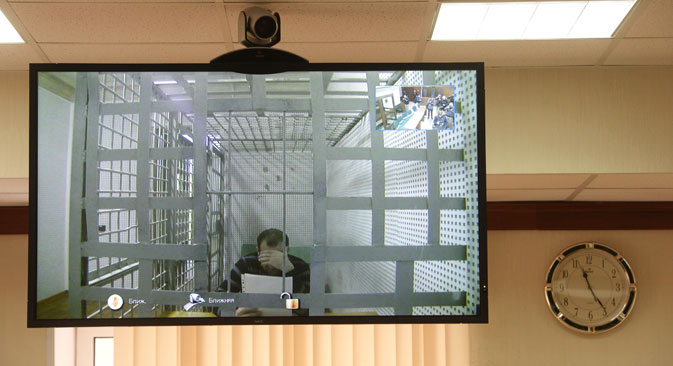 The image of Khamzat Bakhayev, a suspect in the murder of politician Boris Nemtsov on the screen during a teleconference in the Moscow City Court that reviews the legality of his arrest. Source: Iliya Pitalev / RIA Novosti

Investigators probing the murder of opposition leader Boris Nemtsov, who was gunned down outside the Kremlin February 27, say drugs may have been involved, according to Russian daily newspaper Kommersant. Lawyers claim the new evidence makes little difference.

A "drug connection" has emerged in the case of the murder of former Russian deputy prime minister Boris Nemtsov, Russian daily newspaper Kommersant has reported.

According to the newspaper, prosecutors in the Caucasian republic of Ingushetia, where the suspects in the case were detained, claim the main suspect, Zaur Dadaev, and former colleagues from Chechnya's regional interior ministry North Battalion, were initially detained by the Federal Drug Control Service (FSNK), on suspicion of involvement in drug trafficking.  Only later that same day was Dadaev handed to Russia's Federal Security Service, KGB-successor body the FSB, in connection with Nemtsov's murder.

Dadaev's military associates were released and there have been no reports of the results of the FSNK drugs probe. Dadaev was charged with Nemtov's murder the next day. Kommersant says it believes that the key charge Dadaev now faces - carrying out a contract murder - may be altered if it can be proven that the suspect was involved in illicit drug trafficking and use.

That Dadaev was held for two days before he was officially arrested in connection with Nemtsov's murder, is accepted by both the defence and Dadaev himself, although he also claims he was kidnapped and tortured by unknown men in black uniforms. As Kommersant points out, the drugs angle could radically change theories around the crime, "because it will be difficult for the prosecution to convince a jury that an unknown contractor hired drug addicts to murder an opposition leader in the very centre of Moscow."

The drugs connection is backed up by the discovery of traces of "a white powder" found in a rented apartment used by the defendants. Investigators have ordered chemical analysis of the substance.

Speaking to RBTH, Zaurbek Sadahanov, lawyer for Khamzat Bakhaev, who has been charged with aiding and abetting murder, said that the discovery of the substance means nothing and does not relate to all the defendants.

"Even if it is established that this is a drug, you need to find out to whom it belongs. It could have been brought by guests, or simply planted," he said. Sadahanov also noted that so far prosecutors have no evidence that any of the defendants were hired to kill Nemtsov.

Vadim Prokhorov, the Nemtsov family's lawyer, told RBTH, that according to his sources, a fee of less than 25 million roubles (£332,500) was offered for the murder and that part has already been paid. He refused to say whether he has evidence for a money transfer or cash payment to back up his claim.

Prokhorov insists the new evidence suggesting drugs were involved does nothing to challenge the theory the killers came from Chechnya.

"Many criminals, including those from the region, are also drug addicts. They just hired whom they could," he said.

"What is surprising is the tenacity with which journalists of Kommersant and other media are trying to talk about yet another alleged collapse of the investigation as soon as there is any new information," Prokhorov says.

This, he believes, only confirms that powerful vested interests in official circles are working to discredit the prosecution case, "including, those with the capability of launching media campaigns directed against the investigation."

Vladimir Markin, of the government Investigative Committee has gone so far as to urge people to pay no attention to "even the most respected publications."

What can really change the course of the case is whether the alibis of the three defendants, Dadaev, and alleged accomplices Bakhaev and Tamerlan Eskerkhanov, stand up. Their lawyers insist that none of the three were at the scene of Nemtov's murder - Bolshoi Moskvoretsky Bridge - at the time of the killing.

Bahkaev's lawyer has already submitted a request to the Investigative Committee to question a witness he says will confirm his client's alibi. Russian law says the application should be considered "immediately, and if this is not possible, no later than three days from the date of the application," Sadhanov states. However, the Investigative Committee has yet to act on his request and he plans to file a complaint with the Prosecutor General's Office. 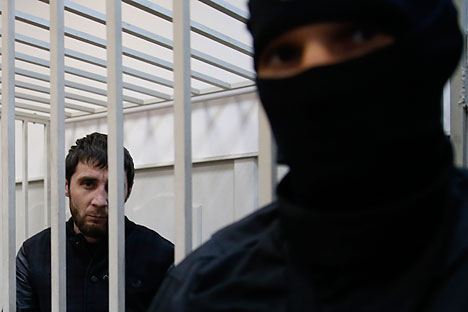