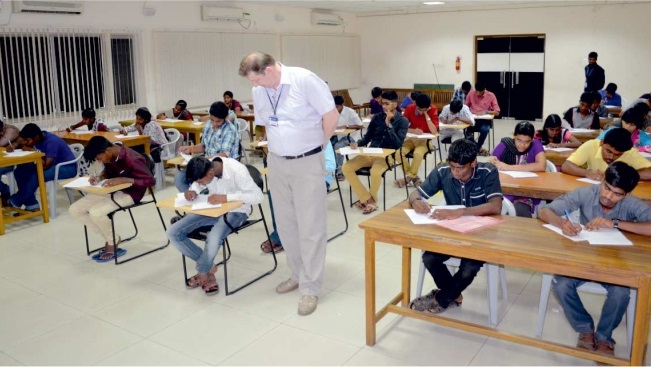 Maths Olympiad “Its time to study in Russia” in Chennai. Source: Rossotrudnichestvo

Organising a Maths Olympiad and travelling exhibitions are among the many promotional events organised by Russian authorities to attract young Indians to study in Russia. Increasingly, Russian universities are being challenged to raise the numbers of foreign students, and are making budget allocations to ensure more foreign students come to study.

More than a hundred Indian students participated in the first stage of the Maths Olympiad “Its time to study in Russia” event, held in New Delhi and Chennai. 15 winners will receive free technical education in Russia.

“The Olympiad is being held every year since 2013 in 12 countries. India participated in the project for the first time,” Tatiana Perova, head of the Russian language training Centre at the Russian Centre of Science and Culture (RCSC) in New Delhi, told RIR.

Among the Russian educational institutions from which the 15 Olympiad-winning students will be offered a choice are the MISA National University of Science and Technology, Moscow Institute of Physics and Technology, Moscow Engineering Physics Institute, Moscow State University of Economics, Statistics and Informatics and Tomsk Polytechnic University. In addition to free studies, the students will be offered a scholarship that will partly cover their costs, including accommodation.

Among the offered courses are ‘Applied Mathematics and Mechanics’, ‘Physics and Astronomy’ and ‘Electronics, radio and communication systems.’

"We plan to hold the next Olympiad in the fall. Possibly the number of cities where it will be held will be increased,” Perova said.

According to Perova, besides the “It’s time to study in Russia” program, there are other opportunities for Indians to go to study in Russia free of charge. Every year a budget allocation is made for Indian students in Russian universities. One can enrol in any one university and get scholarships at various levels, depending on the number of places allocated by the university’s budget for a particular subject, as well as by directly contacting the universities.

In 2015, the major quota for study in Russia has been allocated for medical students, musicians and various technical majors. In 2014, nine fellowships were arranged for Russian teachers, and several scholarships for students of philology.

“Whoever searches, finds. Every year, there are grants offered for different majors. Many possibilities open up,” Perova said.

Each year, at least 10 Indian cities host travelling exhibitions, with the participation of leading Russian universities. This year they will be held in mid-May and June.

“Not all programs are centralized, but their number and, accordingly, the number of students going to Russia on such programs is growing. Today, we are already talking about around 100 people a year,” Perova said.

Bilateral contacts between Russian and Indian universities, which directly exchange students and teachers, are also growing.

“There is a successful example before us. Lomonosov Moscow State University and Jawaharlal Nehru University. Amity University has expressed interest in developing collaboration with Ryazan State University and Moscow University for Industry and Finance ‘Synergy’. With the latter, talks are underway about multilateral cooperation, including the opening of each other's campuses in both countries,” Perova said.

The number of Indian students in Russian universities will be growing

“The Russian government has challenged leading Russian universities to double the number of foreign students by 2020”, said Ekaterina Sidorova, spokesperson for the Moscow Institute of Physics and Technology (MIPT). “There are six thousand students here today, of which 600 are foreigners.”

MIPT is at an advantage, offering the possibility of studying in English, as well as a Bachelor's program in Russian upon graduation from the preparatory department.

“In Russia, teaching Russian as a foreign language has a long tradition. If a student successfully masters the program of the preparatory faculty, usually he has no learning difficulties in the future,” Perova said.

Syed Kamruzzaman, Head of Rus Education, is convinced that the number of Indian students in Russian universities will increase by two- or three-fold after the signing of the Agreement on mutual recognition of diplomas/degrees of higher education. The agreement has been under consideration for several years.

“The recognition of diplomas will significantly increase the flow of students from India; up to four thousand students per year, in the first phase,” he said. According to his information, a total of about 1200 people came to study in Russia in 2014.

Kamruzzaman, who is also Deputy Dean for foreign students at Tver State Medical Academy, pointed out that most Indians - 90% - opted for medical institutions in 2014.

In addition, he said, “the most promising majors for Indian students are the ones which, upon graduation, give a chance for getting a job in the oil and gas sector, as well as aircraft construction.”