Russian Embassy in U.S. to present medals to WWII veterans 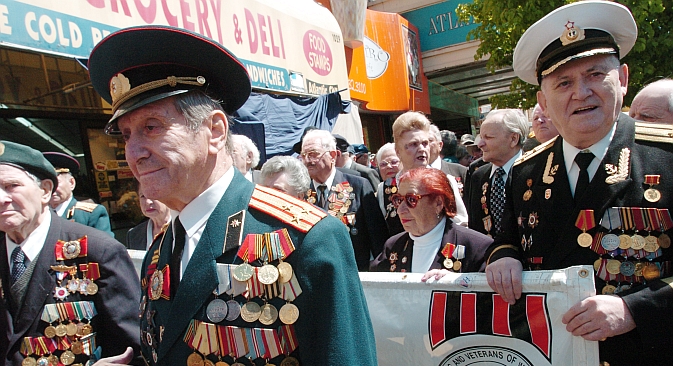 In honor of the 70th anniversary of the allied victory in WWII, the Russian Embassy in the U.S. has prepared some 5,000 medals commemorating the event to be presented to veterans. As part of the commemoration of Elbe Day medals will be presented in Washington, D.C. on April 24 after the laying of flowers at the Arlington cemetery.

The 70th anniversary of the victory over Nazi Germany in World War II will be celebrated by an increasingly dwindling number of those who helped make that victory happen. In Russia, there are some 220,000 people still alive who fought in World War II or were left disabled by it. Worldwide, there are approximately 2.5 million veterans and survivors of the war.

According to the Russian Embassy in the United States, there are approximately 5,000 former Soviet citizens who are veterans, home front workers or survivors of the Siege of Leningrad, concentration camps or POW camps.

In honor of the 70th anniversary of the victory, the Russian Embassy in the U.S. has prepared some 5,000 medals commemorating the event to be presented to these veterans on behalf of Russian President Vladimir Putin. As part of the commemoration of Elbe Day medals will be presented in Washington, D.C. on April 24 after the laying of flowers at the Arlington cemetery.

Several ceremonies to present the medals began well in advance of the big day. Special events at veterans associations in New York, Boston and Philadelphia started in February and March. More than 3,000 of the veterans live in the northeastern part of the U.S.

Diplomats also delivered the medals to several social support centers for senior citizens in order to present the medals to those who could not attend the official ceremonies.

“Some veterans, in order to attend the ceremony, asked for permission to leave the hospital, and the doctors granted it. Some, who could not attend in person, sent their children to receive the medals on their behalf,” said Anatoly Kargapolov, senior consul at the Russian Consulate in New York.

The commemorative medals were also presented to U.S. servicemen who took part in D-Day and in guarding the Arctic and Pacific convoys.

For the majority of veterans, the 70th Anniversary Medal has become an addition to an already impressive collection of commemorative awards. Odessa-born Yakov Markovich Elner, 93, who heads the Massachusetts Association of World War II Veterans of Soviet Descent, remembers receiving a commemorative medal marking the 45th anniversary of Allied victory.

At an official ceremony in Boston in March, the Russian Consul-General in New York Igor Golubovsky presented over 100 medals to veterans. Yakov Markovich recalls that back in 1998, when he first headed the veteran association, it consisted of 700 members. “Over the past 17 years, many of those people whom I got so used to, have passed away. I made the list [of association members] and now I just cross out the names of those who are no longer with us. I pay my last respects to each of them,” he said.

New York resident Nikolai Zaitsev, 91, a native of the Altai Region, traditionally devotes Victory Day celebrations to raising awareness of the war among the younger generations. On May 8, together with U.S. veterans, he will be visiting a school in Brooklyn, while on May 9, he will be addressing the students of the school run by the Russian mission at the UN.

“People in America do not know the truth about the war; they do not know us. I am ashamed to hear it when pupils in U.S. schools say ‘America won the Second World War,’” Zaitsev said. “I shook hands with a U.S. lieutenant in Czechoslovakia, when our reconnaissance team came across their tanks. So how is it that he won the war and I didn’t?”

All the veterans have their own story of how they ended up in the United States. Life led them through the war years and destined them to set up home far away from the place they were born. But no matter what country they call home today, May 9 remains the most important holiday in their life.

As part of this year’s Victory Day celebrations, the organization Russian Youth of America will organize a “Besmertny Polk,” or Immortal Regiment parade in New York.

Besmertny Polk dates from 2012, when people in the Siberian city of Tomsk were debating how to keep the memory of World War II heroes alive even as the veterans themselves passed on. They asked people to create large posters with photos of their relatives who had served in the war, and carry them in Victory Day parades. This year, more than 800 cities will have a “Besmertny Polk” parade.