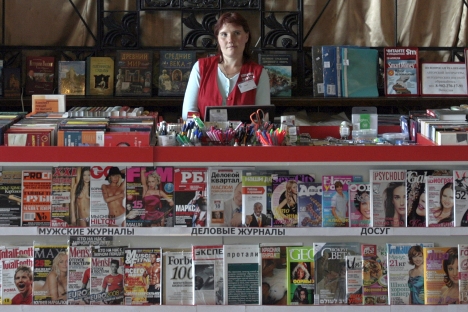 Companies operating in Russia’s mass media sector are facing fresh challenges in order to comply with changes in the law, with restrictions placed on foreign-owned firms in particular. In a special guest article, two lawyers from the Moscow Office of global law firm Morgan Lewis explain the steps the government is taking to tighten regulation of the media sector and explore how this will affect businesses operating in mass media and advertising.

Recent changes in Russian laws governing the mass media sector have created new challenges for companies involved in television, radio and publishing, and prompted careful re-evaluation of existing business structures and arrangements. The main focus of attention has been on new limitations regarding foreign ownership and certain categories of advertising.

The legal provisions implementing the 20 percent cap are broadly drafted, and the law also prohibits foreign interests from exercising “other forms” of control over mass media companies or broadcasters. Transactions breaching the rules are invalid, and companies that do not comply may be fined or prohibited from continued operations. Currently, the amended law is expected to take effect in January 2016 for foreign-owned companies, and a year later for businesses that are over 80 percent beneficially owned by Russian citizens, but through foreign legal structures.

Some supporters of the amendment have argued that Russia is engaged in an “information war” with Western media, and accordingly needs to tighten up its control of foreign activity in the media sector. These issues have been highlighted by recent geopolitical disputes involving Crimea and southeast Ukraine, as well as the adoption of economic sanctions against Russia by the United States, the EU and a number of other countries. Other observers have suggested that numerous countries, including the United States, regulate foreign ownership of media companies, and thus it is reasonable for Russia to do likewise.

The new rules have prompted Russian media companies with foreign shareholders to re-assess their current ownership structures, as well as corporate governance, contractual and other business arrangements. Many foreign-affiliated companies are hoping to minimize the impact on their businesses, but some are unsure what steps are necessary in order to comply. Certain companies are reaching out to new Russian partners, or considering whether to sell their business and exit the market. Some senior media managers have approached the media regulator, Roskomnadzor, for guidance.

From January 2015, Russia has banned advertising on “pay television” channels, reportedly with the goal of enhancing competition in the television broadcasting market. At least 1,400 channels have apparently been affected by this measure, which has significantly affected the economics of operating pay TV channels. However, the Russian authorities have also established certain exceptions to the ban: Firstly, it does not affect certain “must-carry” channels whose inclusion in all television packages is mandatory, such as Channel One and Rossiya 24. Secondly, there is an exemption for certain terrestrial channels using “limited frequency resources” that generally broadcast in large cities. Thirdly, as of February 2015, channels with over 75 percent “national mass media content” may carry advertising. Basically, such channels must carry programming produced by Russians and with no less than 50 percent Russian investment.

For the past two years, Russian law has generally banned advertising for alcoholic drinks. However, recent amendments have loosened the ban, reportedly in preparation for the FIFA World Cup to be held in Russia during 2018, and to facilitate sponsorship opportunities. Accordingly, until January 2019, limited advertising for beer is permitted in printed media, during sports events and on certain sports-related channels, and in or near sports venues, subject to certain exceptions. A related exemption was adopted in December 2014 for certain advertising of Russian-made wines.  However, these rules remain controversial and further amendments are being discussed.

Despite the current economic problems in Russia, the domestic media market continues to provide opportunities for both Russian and foreign media companies, and foreign-produced content remains popular. Therefore, while the recent legal changes have added some additional burdens and challenges, many media companies remain interested in the Russian market. In particular, foreign media companies that have already built strong brands – including a number of well-known magazines and television channels – would like to protect their investments and retain their Russian businesses as far as possible.

Brian Zimbler and Eoin Ansbro are a partner and trainee solicitor at the Moscow Office of global law firm Morgan Lewis (www.morganlewis.com).