How trade unions fare in Russia 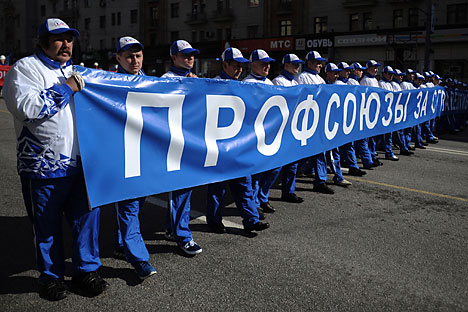 In Russia there are two types of trade unions: those that survived from the Soviet era and the newly established ones that have appeared independently. RIR discovers what trade unions do in Russia and some difficulties they face.

In the USSR, membership of a trade union was compulsory. Consequently, centralized trade unions, including industrial and regional unions, were wealthy and influential organizations. All contributions were transferred to the central organization and then distributed according to approved budgets. The trade unions also managed the system of social insurance. In addition, the organization would have a large number of properties.

With the advent of perestroika, everything had to change.

After the collapse of the USSR, a new organization emerged as the successor of the Soviet trade union – the Federation of Independent Trade Unions (FNPR). Now it is the largest trade union organization in Russia, with a membership of 21 million people.

“In 1989 a large amount of the money was kept where it was raised. The directors of these organizations no longer had money and consequently lost the opportunity to establish a strike fund and centralized programs,” explained Alexander Shershukov, secretary of the FNPR. “A large proportion of the money started to be spent on providing material aid to members of the trade union, sometimes as much as 90%”.

The spirit of May Day

“At the beginning, this organization was aimed at the democratic wave and the new Russian government. Later on, we had economic reforms, price inflation and deterioration in the population’s quality of life, and the trade unions found themselves in opposition to the President,” said Shershukov.

During this time, the workers’ movement was extremely active; demonstrations were held with thousands of participants, and trade unions even participated in parliamentary elections. As part of the Labour Union Movement, some trade union representatives were elected to the State Duma, where they work to this day.

“Since (President Vladimir) Putin has come to power, the normalization of relations with the authorities and the favourable economic situation has not enabled us to fight for workers’ rights,” said Shershukov.

At the start of perestroika, several centres of the trade union movement appeared that were not connected with the FNPR. They appeared as a result of protests by thousands of miners in the coal mining regions of Kuzbass and Vorkuta. Independent activists in other Siberian regions also established trade unions.

These people have all united as the Confederation of Labour of Russia, comprising around one million people. There are other small trade unions, some the size of a single enterprise, Shershukov said.

The most visible among independent trade unions is the Inter-Regional Trade Union Workers’ Association (MPRA). It has grown from a trade union cell at the Ford factory near St. Petersburg. At some stage, the management at Ford’s sent a welder named Alekseu Etmanov to Brazil for a seminar on the company’s trade unions. The trade union has, under his leadership since then, been fighting with the management. Three months after his trip to Brazil, Etmanov organized a week- long strike. In 2007, the factory came to a halt several times, once for a month.

According to Pavel Kudyukin, Associate Professor of the Faculty of Municipal Management at the Higher School of Economics, this trade union manages to evade Russian anti-strike legislation and wins disputes with the employer.

In recent years a definite negative trend has emerged; an increase in the number of criminal cases for financial irregularities against trade union leaders.

“Last year, the chairman of the Volgograd Regional Council of Trade Unions was sentenced to nine years in a detention colony for financial irregularities. Recently, directors of the Sheremetyevo Aircrew trade union were sentenced to prison for terms between 5.5 and 6.5 years. In Nakhodka, the head wharfie got a three year sentence for incorrectly spending 300,000 roubles ($6,000),” said Shershukov. “We have oversight systems and actions of law enforcement agencies look like interference in the internal affairs of the trade unions”.

Kudyukin said the greatest difficulty in developing the trade union movement in Russia today is legislation, according to which it is practically impossible to hold a strike or come to an agreement with an employer.

“If we have less than half of the workers in the enterprise as members, then they are limited in their rights for collective negotiations. And it is practically impossible to organize a legal strike”, he says.

It is interesting that Russian trade unions are now recognized on an international level, whereas earlier, in the Soviet period, they were not taken seriously as organizations.