For Indian students, ‘It is Time to Study in Russia’ 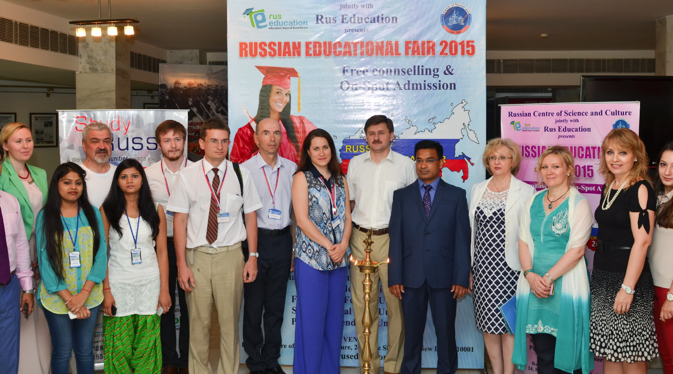 Russian Educational Fair-2015 ‘It is Time to Study in Russia’ was jointly organised by the Russian Centre of Science and Culture and Rus Education with the participation of 11 universities from all over Russia. Source: RCSC

“It is Time to Study in Russia.” That is the message for students and others visiting the Russian Educational Fair which just ended in the Indian capital. Does Russian education meet the challenges of the contemporary world? RIR finds out from university representatives and analysts.

At present, close to 5,000 Indian students study in Russia. The number of students travelling to Russia for the first time comprises almost 2000 people, showing a growth of about 20 percent.

“This rate of growth is continuing and we are extremely satisfied”, said Sayed Kamruzzaman, Head of Rus Education (India), a leading organization that sends Indian students sent to study in Russia.

Traditionally, up to 90% of Indian students go to Russia to study at medical institutions. This year analysts have, for the first time, reported a growth in the popularity of other specialities.

“These include IT, management, aircraft engineering, and oil and gas related fields”, he said.

The most popular Russian university for Indian students has been the Tver State Medical Academy. Around 800 Indians study there, they have their own community and vegetarian café in the dormitory, and hold the largest festival of Indian culture in Russia.

Kamruzzaman is convinced that Russian universities “are global leaders in terms of price and quality of education”. At the same time, Europe, in his opinion “as before, remains more popular from the point of view of students travelling there, expecting to find work and remaining there to live”.

Viktor Katochkov, the pro-rector for international activities at South Ural State University, where 2,000 people out of the 50,000 students are foreigners, said he has given himself the task of increasing the number of foreign students gradually from five percent to ten percent. So far the annual increase is around 500 foreign students.

“At the moment we have students from 36 countries studying with us,” he said.

A decision has already been made to establish a BRICS Universities League, which the top five universities of each country can join.

Answering a question about advantages of Russia’s provinces in comparison with Moscow, Katochkov explained that, as was previously the case, they have lower educational fees associated with a lower level of salary, meaning that universities are unable to increase charges for education.

“We have conducted a study and calculated that, as a whole, life and study in the provinces is 2.5 times cheaper for a student than in Moscow”, he said.

These figures are also confirmed by representatives of the Ural Federal University, which is currently home to more than 30,000 students from 60 countries.

Another advantage of the provinces is what experts call “the uniqueness of every foreign student, whom many lecturers treat, as in former times, as their own children”.

“The fact of the matter is that there is always a desire to help, because someone is in a different country,” observed Katochkov. “Even if he arrives on a Sunday, they will find him, give him a bed, meet him, and show him where he can get something to eat.”

Arriving in India for the first time, having come from Sochi where the 2014 Winter Olympics were held, the Russian International Olympic University (RIOU) is offering its new program, Master of Sports Administration, which was launched in 2013. The educational institute already has one graduate and one student from India.

“The program is designed for 10 months,” said Iya Makharadze, a senior specialist at the RIOU. “Our first graduate from India already works in New Delhi, and our student has already received a job offer from the United Kingdom”.

The main objective of this programme is to produce a new generation of effective sports managers with both strategic and operational skills. The program runs for 39 weeks (three semesters), with each week having five study days.

“We are leaving India with a future student. A graduate from one of the local bachelor programs who does yoga and has numerous certificates,” Makharadze said.

In Russia alone, there are no less than 7,000 vacancies in the sphere of sports management.

Russia as a destination for higher education

Besides Delhi, representatives from these universities travelled to Chennai, Mumbai, Ahmedabad, Kolkata and Imphal. The last city is the administrative centre of Manipur state, and is a new destination. Earlier, the Indian north-east has not received the attention of Russian universities.

“At Imphal we received quite a good turn out for our first time,” said Kamruzzaman. “The exhibition was visited by more than 20 people”.

During the second phase of the exhibition, they might also visit Hyderabad and Bangalore.

“There are plans in the future to visit Jaipur, Chandigarh, Bhopal”, he added.

Participation in the summer exhibition has already been confirmed by 10 more universities, bringing the number of participants in both phases close to 30.