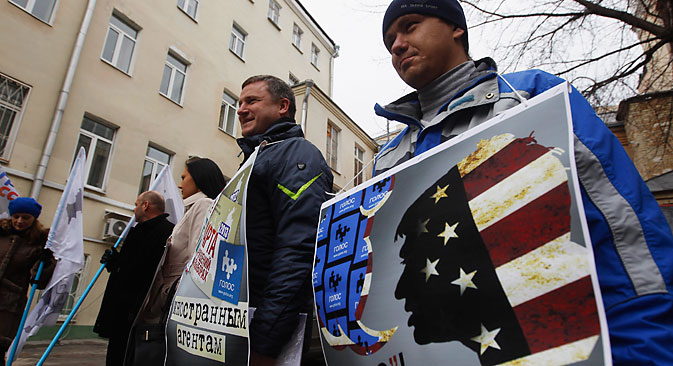 Activists hold placards outside the office of election monitoring NGO Golos (Voice), during a protest against the organisation's foreign relations, April 5, 2013. Source: Reuters

On May 23, Russian President Vladimir Putin put his signature to a new law that imposes significant restrictions on foreign or international non-government organizations operating in Russia deemed “undesirable.” Rights activists have criticized the vagueness of the legislation and say it is directed against civil society.

Russian President Vladimir Putin has signed a law on “undesirable” foreign or international non-government organizations, forbidding those identified as such from opening delegate offices, carrying out programs and projects and promoting their activities through the media or internet.

The lawmakers responsible for the legislation, signed into law by the Russian president on May 23, decided that in order to be decreed "undesirable" for Russia it was enough that an overseas group be deemed a threat to the country's constitutional order, defense or security.

It is not only the groups themselves that risk breaking Russian law – anyone who collaborates with them, including legal entities, ordinary people, banks and financial institutions, may all be deemed "accomplices" and face fines of up to 100,000 rubles ($2,000) or a jail term of up to six years.

Russian State Duma Deputy Anton Ischenko told RBTH that the aim was "to create an instrument for reacting quickly to increased danger." Ischenko, a member of Vladimir Zhirinovsky's ultra-nationalist Liberal Democratic Party of Russia, who helped draft the new law, adds it is designed "undermine all attempts to shake up the situation in the country from abroad." Commercial companies may also fall under the dragnet of the law if they too are considered "undesirable."

The law has its roots in a dispute over the status of the British Council several years ago that led to the closure of the UK's international cultural organization's office in Russia for a period. Critics of the Russian government's actions at the time suspected that elements within official structures resented the commercial success of the council's English language teaching business. The council is now once again working in Russia.

The new law was swiftly adopted after being approved by the Russian Prosecutor General's office and the Ministry of Foreign Affairs. The Ministry of Justice is now drawing up a list of "undesirable" organizations.

"We are not responsible for who will be included in the register," says Ischenko, admitting that currently he cannot name any organization that would be considered undesirable.

Those working in international NGOs, however, say they believe the law is targeted at them and already feel under pressure.

"The law is directed against us and organizations like ours," said Olga Pispanen, president of Open Russia, a group founded by former Yukos chief Mikhail Khodorkovsky. Pispanen, who is also Khodorkovsky's press secretary, dubbed the new law "pure idiocy.” She added: "We work, do our own thing, therefore they can create whatever they want."

"The law is directed against civil society in Russia," said Sergei Nikitin, head of the Russian branch of Amnesty International. "This is a logical follow-up to the law against foreign agents," he said, referring to non-profit organizations that are engaged in political activity and are financed from abroad.

Although public sector groups may not like it, the new law demonstrates a certain consistency, Nikitin added. "First they dealt with the Russian organizations and now they are tackling the foreign ones."

Rights activists are also outraged by what they call the "sloppiness" of the law. Nikitin observes that it repeats measures found in existing laws for protecting the government from threats, particular the law on extremism. There is no mechanism in the new law for removing an organization from the list or covering how a group can appeal legally a decision to deem it undesirable.

Political analyst Igor Bunin explains that the law's vagueness may be attributed to the fact that it was adopted for the purpose of “self-defense.” The law does not make clear against whom it is directed and, therefore, is potentially has a very wide scope. The law's injunction to prevention rather than cure vests much power in the state, he adds, enabling the Kremlin to target those groups "it deems dangerous."

Pavel Salin, director of the Center of Political Studies at the Russian Governmental Financial University, says that introducing fines and criminal liability for "accomplices" of undesirable organizations introduces a troubling new precedent.

"This could have a big impact on the environment in which organizations operate, cutting off many sources, not only financial but informational too," said Salin. 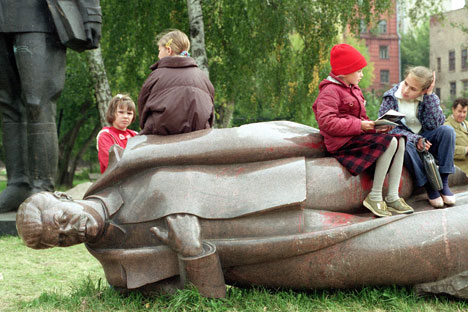