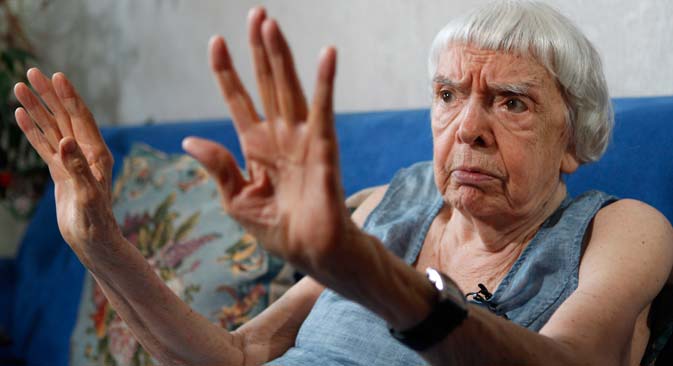 Russia's oldest human rights activist and Director of the Moscow Helsinki Group Lyudmila Alexeyeva is returning this year to the Russian Presidential Council for the Development of Civil Society and Human Rights, which she left in 2012. RBTH spoke with Alexeyeva about her return, as well as about the murder of liberal politician Boris Nemtsov, the Crimean Tatars, the opposition and much more.

RBTH: What will you do in the council? I know that you are very concerned about the 2012 law on foreign agents…

Lyudmila Alexeyeva: Yes, that is precisely what I will be occupied with. This law is complete foolishness. But it is meaningless to try to obtain clarification on the definition of "political activity."

RBTH: Why is it meaningless? This is what many of your activist colleagues are insisting on.

L.A.: Because any organization that receives foreign money becomes a candidate for "agents." No matter how much we clarify this definition, in end, if you really want to you can apply it to just about anything.

RBTH: Then what are you proposing?

L.A.: If we want to solve this problem, we need to look at the internal source of financing. The government cannot finance all the non-governmental organizations. This is not right, since we are not governmental but social, and there are thousands of us. Something else must be done. Vladimir Putin needs to appeal to businesses on our behalf. We have many wealthy people who would be happy to finance us. But they are afraid to endanger their businesses.

On Boris Nemtsov and the Crimean Tatars

RBTH: The investigation into the murder of oppositionist Boris Nemtsov has been going on for three months. You doubted from the very beginning that the police would find the person who ordered the assassination. Has your opinion changed?

Lyudmila Alexeyeva was born in 1927 in Yevpatoria, USSR. She became a rights activist by speaking out against the trials of political prisoners in 1966. For this she was fired from work and excluded from the Communist Party. However, she continued distributing underground publications on human rights.

In 1976 she co-founded the Moscow Helsinki Group, but in 1977 emigrated to the U.S. and returned to Russia only in 1993. She is the author of more than one hundred articles on human rights, the book The History of Dissent in the USSR and her memoirs, The Thaw Generation. She has received numerous awards, among which are the French Legion of Honor (2007), the Order of Merit of the Federal Republic of Germany (2009) and the Andrei Sakharov Prize (2009).

L.A.: Well, since they still haven't been able to question Ruslan Geremeyev, who, it seems, is the mediator between the people who carried out the assassination and those who ordered it… Geremeyev is in Chechnya and is not accessible for the investigation.

RBTH:According to several mass media sources, Geremeyev was questioned, but only as a witness. Then he left Russia.

L.A.: It's obvious that the whole affair is very obscure. And it looks like everything will be limited to those who carried out the murder, not to those who ordered it, especially since the chief investigator in the case has been substituted. The former investigator, Igor Krasnov, had shown with his previous experience that he knows how to work and is not influenced by political considerations. He was then replaced with Nikolai Tutevich, who is more obedient to his authorities. I think this is a very bad sign.

RBTH: Why do you think that he is more obedient to the authorities?

L.A.: Because the case that he investigated in 2008 resulted in nothing. While the first investigator is known to be very effective.

RBTH: There is another problematic issue that you have been following since the 1960s. This concerns the position of the Crimean Tatars. What is your view of it now?

L.A.: On one hand, I see that President Putin is carrying out the promises he made to Mustafa Dzhemilev (chairman of the Mejlis of the Crimean Tatar People until 2013) when the latter used to come to Moscow. Putin had promised that the Crimean Tatar language would be widely used, that there would be Tatar schools, etc. This is happening.

L.A.: On the other hand, Dzhemilev is not allowed to go to Crimea from Kiev. They are also not allowing Refat Chubarov, the current chairman, who left Crimea for several days, to return. On May 18, the day of the deportation of the Tatars from Crimea in 1944, the Tatars would come together on the main square of Simferopol for an annual gathering. This year they were not allowed to do so. They did it in some far-off Muslim cemetery. That means that the Crimean Tatars do not have the freedom to assemble.

RBTH: In 2016 elections will be held to the State Duma and the opposition has announced that it will be participating. In fact, the opposition has united into a coalition precisely for this purpose. You know many of these people. How would you evaluate their potential?

L.A.: The attempt to unite is a great breakthrough. This has never happened before. Moreover, everyone would say: "They can't do anything, it's just a battle of vanities." It's not exactly like that. It's not a matter of vanity, it's just that our society does not have a political culture. And it's obvious why. For a long time the country did not have a chance to engage in a political battle.

RBTH: What, according to you, is political culture?

L.A.: One of its most important elements is the ability to agree, find compromises with people who don't share your views. But here it is all or nothing.

RBTH: Is the lack of political culture the opposition's main problem?

L.A.: No, the main problem is that the opposition is given conditions within which it just can't operate. Its leaders are not shown on television. And in our modern life if a person is not on television, then it is as if he doesn't exist at all. Also, the government is thinking of moving up the date of the 2016 Duma elections, from December to September. It is clear why September: The election campaign will then be held in the summer when no one is around and thus the turnout will be low.

RBTH: The opposition is frequently blamed for not having a leader who the people would follow. Alexei Navalny has two conditional sentences, [political activist] Sergei Udaltsov has recently been moved to a penal colony (where he is serving a term for the organization of mass disorder during a 2012 demonstration). Boris Nemtsov has been killed. Which leader do you see?

L.A.: I am not a politician and do not belong to the opposition. It's difficult for me to judge. But there are people who could be leaders. [There is] Vladimir Ryzhkov, who spent a long period in the State Duma and would be an excellent speaker. But he is nowhere now. Or Mikhail Kasyanov (co-chairman of the RPR-PARNAS Party), who was one of Yeltsin's best ministers and also during Putin's first presidential term. [Former finance minister] Alexei Kudrin…

L.A.: A very talented person! Of course, he would be very helpful.

RBTH: Then what is he doing abroad? Why is he involved in politics from there and not here? Some are charging him with having run away.

L.A.: No, this isn’t running away. On the contrary, he really wants to return. He was basically forced to leave Russia. He was allowed to go abroad with the cunning idea of "good, now stay there." But if he was called upon to help the country, he'd return, I'm sure of it. I just know him as a person.

On rights activism and the United States

RBTH: There is the stereotypical opinion that rights organizations in Russia are just formal structures and are actually incapable of seriously influencing decisions made in the State Duma, for example. Do you agree with this?

L.A.: Unfortunately, the government does not really heed rights activists. Rights activism in Russia was born in the middle of the 60s and existed for 25 years during the Soviet era. We have experience, there are many professionals among us and I am one of them. If I have been doing this for 50 out of my 87 years, I would have to be an idiot not to have learned how to do it! Therefore I wouldn't say that we don't have any influence. In the end we are taken into consideration.

RBTH: You are listened to by politicians not only in Russia but also abroad. Recently you met U.S. Deputy Secretary of State Victoria Nuland.

Some people perceive such meetings in an ambiguous manner and describe your activity as betraying the government. Please define your position regarding this issue.

L.A.: To our journalists, to foreign correspondents, to the presidential administration, to Nuland, I say one and the same thing: whatever I think. Rights activism has no borders. They called me from the embassy and said that Nuland wanted to meet with me. Honestly, I don't know why she came. "This law about foreign agents is rather disappointing, isn't it," she says. "Of course, it is disappointing," I respond, "and how foolish." "What do you think, should I speak about it or will I only harm these organizations?" "It's better not to. You'll only harm them." I just answered her questions. And not so that she would protect us. We'll manage to deal with our authorities by ourselves."

RBTH: You lived in the United States for 16 years and are an American citizen. Why did you return to Russia?

L.A.: When in Russia my son and husband, who weren't rights activists, were threatened with arrest, I was forced to leave and I went to America. I returned in the mid-90s when many were allowed to return, while I wasn't – I was still on the KGB blacklist. I don't hide the fact that I have American citizenship. Some say that I should renounce it. I will never go to America, but the country was very good to me in my time. I lived a normal life there in a time when here I would have been in prison. I returned because Russia is my country. And I want to live in my country. 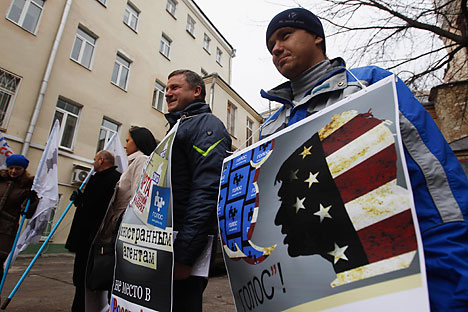