Russian Muslims urged to respect the law and state 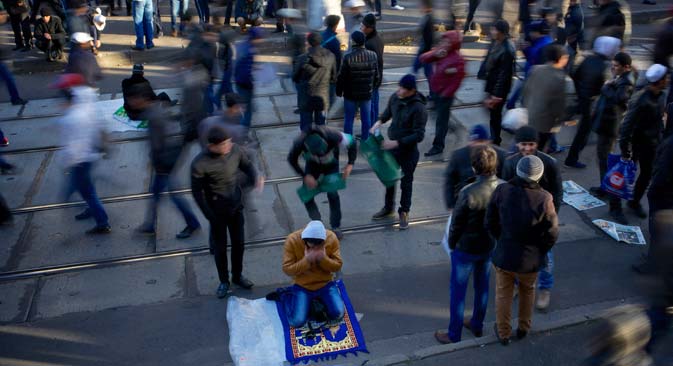 A man prays outside a mosque during celebrations of Eid al-Adha in Moscow. Source: AP

The ruling body for Muslims in Russia, the Council of Mutfis of Russia, is urging its followers to be loyal to the state. A new social doctrine adopted by Russia's top Islamic clerics defines the place and role of Muslims in the country's life within both religious and secular laws. Patriotism and loyalty are at the heart of the new doctrine.

A number of experts, from the council as well leading theologians, religious scholars and academics, have drafted the new doctrine, adopted by the Council of Muftis of Russia on May 27. It combines recommendations to Muslims on a wide range of issues, from attitudes to the state to everyday matters. The provisions of the doctrine are supported both by Muslim sources, the Koran and Sunnahs (teachings and practices of the Islamic prophet Muhammad) and by Russia’s secular laws.

The doctrine effectively outlines the views of Muslim theologians that are loyal to the current authorities on what a true Muslim should be like.

Firstly, a true believer must be a patriot. “Love for one’s motherland is not only acceptable but is essential from the point of view of teachings of Islam,” the doctrine says. This covers not only patriotic sentiments but also compliance with the law. It is prescribed that a Muslim assumes obligations of the social contract envisaged in the constitution. A Muslim should also be a peace-loving person: the doctrine says that every effort should be made to avoid war as a form of jihad. A military jihad can be carried out only if ordered by a lawful ruler.

This is not the first social doctrine to be adopted by Russian Muslim scholars. The previous one was published in 2001. In an interview with RBTH, one of the contributors to the 2015 doctrine, Damir Khayretdinov, the vice-chancellor of the Moscow Islamic Institute, explained: “Since the adoption of the first doctrine, the situation has changed. In Russia it has stabilized (meaning the end of hostilities in the North Caucasus – RBTH), whereas for the rest of the world, unfortunately, the opposite is true.”

Khayretdinov pointed out that many young Muslims, including those from Russia, have become influenced by extremists and some have even travelled to the Middle East and joined terrorist groups there. One of the main tasks of the new doctrine is to keep the young generation within traditional Islam, he added.

The threat of radicalization of Islam is one of the reasons why the current doctrine deliberately focuses on peace, Khayretdinov said. “The two biggest sections in the doctrine are devoted to Muslims’ peaceful co-existence with those of other faiths and the right attitude to jihad and takfir. Takfir is a practice whereby a religious leader declares that a particular state is a godless one and Muslims must fight against it (this practice is one of the fundamental principles of ISIS – RBTH). The doctrine says that takfir should not be applied now.”

The doctrine will officially come into force in June, after it is signed by the country’s three main Muslim organizations (muftiates). Damir Khayretdinov predicts that the Muslim population will respect the document.

Varvara Pakhomenko, an expert in Caucasian affairs and a consultant with the International Crisis Group, told RBTH that the authority of the theologians behind this doctrine is not absolute for all Muslims.

“It is important to remember that, unlike Christianity, Islam does not have the single institution of the church that could say: ‘Do this or that’. It goes without saying that the muftiates command respect among a large number of Muslims, but not everywhere. There are many communities, many influential preachers, including radical ones, who are opposed to the muftiates.”

Another weakness in the doctrine, according to Pakhomenko, is its focus on “traditional Islam” as a pillar of Russian statehood. Thus supporters of more radical movements are excluded from the dialogue between the authorities and the Muslim community.

Religion in Russia Russia in the context of Islam law Society