Poor, down and out in Russia 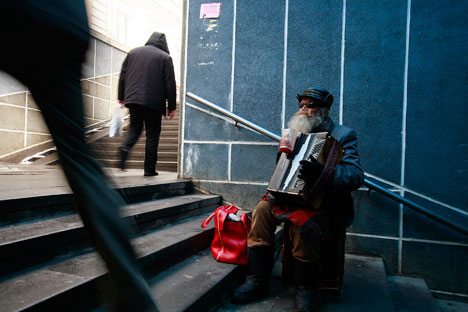 Around 16 million people, or 11% of the population in Russia, found themselves below the poverty line, figures for 2014 indicate. This is official data which, traditionally, experts disagree with. The fear is that official statistics may be underestimating the problem and that, in 2015, almost one in every five Russians may be poor. What is poverty in Russia like and how is it being dealt with?

There are reasoned estimates to indicate that, in 2015, one in every five Russians may be staring at poverty. According to the estimates, different from official statistics from a year ago, between 25 to 40% of Russian citizens are calling themselves poor.

While 40% would certainly be an exaggeration, 30% appears quite a realistic figure, Elena Kiseleva, an expert analyst with the Institute for Complex Strategic Studies told RIR.

Officially, the poverty level is when incomes fall below subsistence level, which is today pegged at 8,000 rubles per month ($ 150) per person.

“Until recently, the number of poor in the country had been steadily declining since 2000. Even during the last crisis (2008) they did not become substantially more,” Kiseleva said. “But now, everything will change. Wages and incomes are reducing, most of them go to cover food costs, housing and community services, other priority needs. There is no money left for anything else. This is evidenced by the index of loan repayments. Today, we are seeing an increase in the number of second and third loans that are taken out for servicing the previously taken loans,” she said.

People are getting poor faster than Rosstat (Russian Federal State Statistics Service) suggests, said Sergei Smirnov, Director of the Institute of Social Policy HSE. This year, the consumer spending basket has increased by 20%, on average, because of the impact of western imposed sanctions. According to Smirnov, it is possible that by the end of the year, every 8th person will live from pay check to pay check.

“The salary level of many people is close to the subsistence level, or slightly above”, said Kiselev.

According to official statistics, this is the case for 13% of employed people.

According to Leontiy Byzov, senior official of the department of analysis of mass consciousness dynamics at the Institute of Sociology, “It has become impossible to live on a small pension or salary. This is a very important factor, which we have been trying to leave behind for 15 years after the default of '98.  Now we have returned to it.”

What has changed during the crisis is that today's poor are not only people with social problems. According to public opinion monitors between late March and early April 2015, the number of poor has increased by 25-30%, Byzov said.

Poverty can be of different kinds. Statistics shown in Ella Pamfilova’s Human Rights Ombudsman’s annual report, for example, are even more alarming. According to the Public Opinion Fund, 47% of the population consider themselves to be “the working poor”.

“It is hard to give up what you are used to having, so people feel they have become much poorer, even if that is not quite so”, Byzov explained.

The depth of poverty

What will save people from hitting the bottom of the economic pile?

Asked what measures had been taken to alleviate the problem, the press service of the Ministry of Labour and Social Protection reminded RIR that insurance pensions have been indexed by 11.4% (average sum is 13 thousand rubles), social security by 10.3%, and benefits for families with children and monthly payments for certain categories of vulnerable citizens, by 5.5%.

The President (Vladimir Putin) has, on May 23, authorized the use of money paid on the birth of the second child as mortgage fee payment, as an additional measure of support to the families.

“Pensions are being indexed regardless of the crisis, especially since February, but they are being indexed at a percentage below the Rosstat rate of inflation (16.7%),” Smirnov said. He termed the permission to invest maternity capital towards the mortgage as “a hopeless decision”.

It is such decisions that officials are hoping will work. Particularly, Smirnov warned, “The Ministry of Finance is working on plans to not index pensions to the inflation level, while the State Duma has come up with an initiative not to pay pensions to working pensioners whose annual income is above one million rubles”.