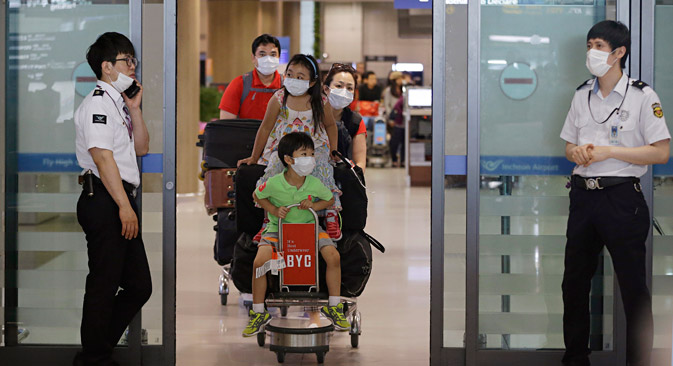 Passengers flying into the Russian Far Eastern cities of Vladivostok, Khabarovsk and Yuzhno-Sakhalinsk from South Korea will be screened for the Middle East Respiratory Syndrome (MERS), following a warning from Russia’s Public Health Watchdog that the disease could spread to the country.

Rospotrebnadzor said the “sanitary and quarantine supervision of persons returning from coronavirus infection-affected countries has been strengthened in the Primorye Territory,” Prima Media reported on June 10.

Medical officers will also screen passengers coming into the Russian Far East by train and ship.

“The risk of any infection being spread to any country in the world exists due to intensive migration within the population…only if someone is completely isolated could one say that there is total protection, and there are no such states," Anna Popova, the head of Rospotrebnadzor said, according to Sputnik News.

Around 108 confirmed cases of MERS had been registered in South Korea as of Wednesday. Authorities there have quarantined over 2,800 people, according to the Sputnik News report. The outbreak of the virus in the country has already taken nine lives, but Popova emphasized that the World Health Organization has not yet recommended that countries introduce travel bans to South Korea.

“Epidemiological reasons for this [a ban] definitely do not exist,” Popova said, according to the report. She added that staff at Russian airports have been equipped to respond to potential cases of infection, and are testing passengers off all flights from South Korea.

MERS coronavirus triggers symptoms such as fever, coughing and a shortness of breath. Its incubation period is estimated at five to six days, extending for a maximum of about two weeks.