25 years of post-Soviet Russia: How far has the country come? 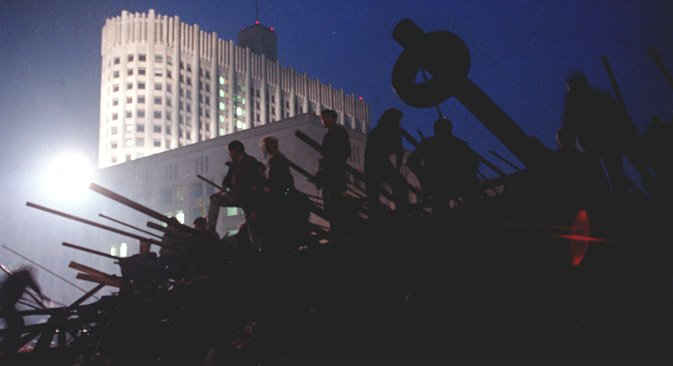 The barricades in front of the building of the Supreme Soviet of the Russian Federation, August 20, 1991. Source: TASS

On June 12 Russia celebrates the 25th anniversary of the proclamation of the Declaration of Sovereignty of the Russian Soviet Federative Socialist Republic, the act that formed the basis for the construction of post-Soviet Russian statehood. Summing up this period, Russian experts say that in many respects post-Soviet Russia has fulfilled itself as a state, but express reservations about the viability of an authoritarian system.

The year 1990, when the Declaration of Sovereignty of the Russian Soviet Federative Socialist Republic was adopted, was a time in which the Soviet Union's rapidly progressing decline had become patently clear. The processes that were to lead to the country's disintegration in December 1991 were already at work. The USSR was disturbed by mass rallies whose participants demanded radical economic and political reforms.

The protesters insisted on the abolition of the Communist Party’s monopoly of power and eventually succeeded, leading to the appearance of the post of president in the Soviet Union, which was taken by the party’s general secretary, Mikhail Gorbachev.

The economic situation was rapidly deteriorating, with shortages of food and goods reaching colossal proportions. The Soviet Union began to receive humanitarian aid from abroad. Lithuania declared independence and secession from the Union, which led to an economic blockade of the republic by Moscow. The other Soviet republics declared their state sovereignty within the USSR. Russia adopted a similar declaration on June 12.

It spoke of the "determination to create a democratic state of law as part of the renewed Soviet Union." The declaration established the supremacy of the constitution and laws of the republic on the territory of the Russian Soviet Federative Socialist Republic and reaffirmed the right of free secession from the USSR. The document laid the foundations of the statehood of post-Soviet Russia.

Assessing the path traversed by the Russian state by the results of the 25-year period, analysts tend to believe that in terms of its main features, post-Soviet Russian statehood has passed the test of time.

“The declaration itself is a very contradictory phenomenon. On one hand, it determined the collapse of the USSR and, on the other, retained the territory of the Russian Federation,” political analyst Dmitry Andreyev told RBTH.

He believes that the declaration of Russia's sovereignty was “the final nail in the coffin of the Soviet Union.” However, there could have no longer been any other scenario, and it was the “choice of the best of the worst options,” since the opportunities to preserve the integrity of the Soviet Union had been already missed.

According to Boris Shmelyov, head of the Center for Political Studies of the Institute of Economics, "having initiated the collapse of the Soviet Union, the Russian people effectively abandoned part of itself," since "the Soviet Union was also greater historical Russia."

Although in the past 25 years Russia has managed to create institutions of governance and civil society, to establish an economic system, the Russian statehood still failed to acquire the necessary stability over the same period, the analyst points out.

According to Shmelyov, this is largely due to the fact that Russia has not yet managed to build an effective democratic political system.

“We have an authoritarian regime even if a soft one; a system of checks and balances has not formed; the parliament does not work – it's just a voting machine; there is no stable party system, a lot of corruption,” he said in an interview with RBTH.

At the same time, according to the president of the National Strategy Institute, Mikhail Remizov, this system has its advantages in terms of consolidation of power and the ability to weather crises. Describing the role of the institution of strong presidential power in Russia as generally positive, the analyst called it the “cornerstone on which the national construction rests.”

The tradition of strong presidential power in Russia today was laid by the first post-Soviet leader Boris Yeltsin (1991-2000), a man whose reign is widely seen as a time of genuine democratic experiment in Russia.

However, Boris Shmelyov considers Yeltsin as the founding father of what he calls “soft authoritarianism” in Russia, seeing evidence of this in the 1993 constitution – “adopted by the first Russian president” – according to which the Russian political landscape is dominated by the institution of the presidency, which overshadows all other bodies of government, while the parliament plays a secondary, subordinate role.

This model was inherited and subsequently further strengthenedby Russia’s current president Vladimir Putin, a man who in his first two terms (2000-2008) was widely seen as having brought stability and economic prosperity to Russia, despite attracting harsh criticism from progressives both inside the country and abroad for restricting media freedom and failing to crack down on issues such as widespread corruption. Putin’s decision to seek a third term has also been controversial, with large-scale protests taking place in Moscow December 2011 to May 2012.

The challenge of multi-ethnicity

However, speaking about the positive role played by the institution of strong presidential power in Russian conditions, political scientists stress at the same time the weakness of other state institutions, including the parliament. In addition, listing the vulnerabilities of modern Russian statehood, some observers point to the ethno-territorial principle of the federation – the presence of the ethnic republics in the Russian Federation.

Remizov points out that the course of Soviet nation-building is being continued in this respect – instead of creating a nation as a single political entity, the Russian Federation is building a multi-ethnic state. "If we talk about the plurality of nations within the country, it means that the country is made up of subjects entitled to self-determination, with the ensuing consequences," he notes.

‘No sense of a young country’

In addition to the ethnic structure of the country, experts refer to another controversial feature connected to the Soviet past: the widely-held belief that the ideology of modern Russia is too focused on its nostalgic Soviet baggage.

According to Mikhail Vinogradov, president of the St. Petersburg Politics Foundation, the Russian Federation is shying away some what from its present statehood – which may be associated with nostalgia for the stability of the Soviet state system–and trying to strengthen it by claiming its succession from the USSR.

"This is a serious risk, because by tracing its history from [the founder of the ancient 9th-century Russian state] Rurik, the Russian Federation deprives itself of the feeling of a young country, the historical dynamics of a young country," the expert told RBTH.

"Meanwhile, those post-Soviet countries that consider themselves young are showing better [economic] dynamics," said Vinogradov. He pointed to the success of Kazakhstan and Azerbaijan, which have shown high economic growth rate over the last 15 years, while preserving social and political stability – though both, with their authoritarian models of governance and petrodollar-dependent economies, fall well behind the star of the post-Soviet world, little Estonia, which since gaining independence in 1991 has reinventeditself as a prosperous modern democracy based on one of the world’s most hi-tech economies.