What attracts Russians to ranks of Islamic State? 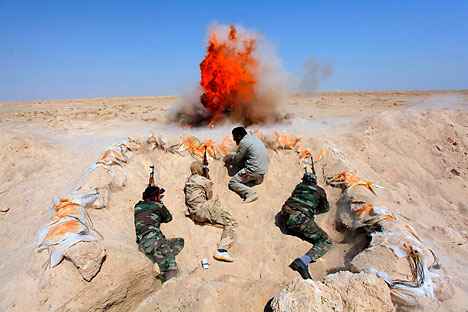 According to the FSB, recruiters from religious extremist groups have been able to attract more than 1,700 Russian citizens into their ranks. Source: Reuters

Varvara Karaulova’s story epitomises how Russia, like many other countries, is faced with a challenge, of citizens being recruited by religious extremists and travelling to West Asia to join violent terrorist groups like Islamic State (IS). Analysts surmise that various factors could be behind this; from lack of employment opportunities for educated youth to an excessively harsh, misguided approach by law-enforcement authorities.

Varvara Karaulova surfaced in the first week of June, dominating Russian media coverage as the epitome of how easily Russia’s youth, like those of many other nations, can be lured and fall prey to joining Islamic fundamentalist organisations.

A 19-year-old philosophy student at Moscow State University, Karaulova suddenly disappeared from Moscow only to reappear soon after in Turkey. According to her family, she left Russia to travel to Syria to join the ranks of the militant Islamic State (IS). Turkish border guards detained Karaulova when she tried to illegally cross the border into Syria, along with others.

Her story appeared not only to demonstrate the challenge Russia faces in its fight against Islamic extremism, but also to serve as an alarming reminder that not only Russia’s orthodox Muslims are at risk of falling prey to fundamentalist recruiters.

Karaulova grew up in a secular Russian family, was fluent in English and French and studied Middle Eastern culture and Arabic at Moscow State University. But something suddenly changed in her behaviour. She began wearing the hijab, reading books on radical trends in Islam and, on May 27, 2015, she disappeared. A few days later she was spotted in Turkey and is now awaiting deportation to Russia.

Not an isolated story

According to the FSB (Russia’s security service), in the course of the last one year, militant religious groups have managed to lure more than 1,700 Russian citizens into their ranks. The number may be much higher.

The majority of Russians who join extremist ranks are people from the country’s Muslim republics, but occasionally they are ethnic Russians. This is not a new phenomenon: There have been instances of Russians fighting with Wahhabi groups (like Al-Qaeda) even before the appearance of IS.

Said Buryatsky, one of the ideological leaders of the terrorist underground of the Caucasus at the end of the 2000s, was a Russian whose actual name was Alexander Tikhomirov. Buryatsky was eliminated in 2010.

There have been cases that were documented as far back as the Soviet campaign in Afghanistan during the early 1980s of ethnic Russians converting to Islam and going over to join the Mujahideen to fight against their former comrades-in-arms.

The lure of extremism

Georgy Mirsky, an expert on the Arab world and Doctor of Historical Sciences, pointed out to RIR that Russia is far from the only country whose young citizens are travelling to Syria and Iraq to join IS.

"In the last month 1,733 people alone left France to join ISIS, and statistically, one fifth of them did not come from Muslim families but were recruited,” said Mirsky, who pointed out that 30 percent of the women joining ISIS were “still not Muslim until recently.”

What is forcing young people, who grew up in secular western families, to change their outlooks so radically and join terrorist groups like ISIS? Russian psychologist Pavel Ponomaryov is convinced that the problem lies in an existential crisis that many young people are experiencing.

"If we speak about Karaulova, we will see that she tried to commit social suicide, that is, she attempted to completely delete herself from the society in which she lived and find a new identity in a different world,” said Ponomaryov.

“Students and other young people are going through a crisis: Society is not giving them a chance to express themselves, [and is] imposing harsh restrictions. The intention to free oneself from this society and obtain everything and immediately in a different system is so great that people are practically ready to give their life for it."

Georgy Mirsky is of the same opinion, comparing the popularity of Islamic extremism to the 1930s, when large swathes of the youth of several European countries followed the radicals of the time – the communists and the fascists.

"There are neither any fascists nor any real communists today, however, against the background of the dullness of everyday life there is a big new movement – radical Islam. Recruiting takes place in two places: on the internet and in the mosque,” he said.

According to Mirsky, the story of Varvara Karaulova indicates that Russia underestimates the threat of Islam: "The most amazing thing is that everyone – her family, her friends – was indifferent; no one noticed anything until she disappeared. It is a complete mess,” he said.

The vulnerability of Russian Muslims

Despite the growing popularity of extremism among secular youth, the main audience being targeted by terrorist agents, ISIS in particular, is Muslims. According to an interview with an ISIS preacher published by news website Meduza in May, "no less than 1,500 people, half of them Dagestani and half Chechen, from the North Caucasus are fighting for ISIS (both are Muslim peoples – RIR).

Varvara Pakhomenko, a specialist on the Caucasus and consultant at the International Crisis Group, told RIR that there are three main reasons for the popularity of radicalism among Muslims, the first of which is dissatisfaction with the quality of the government.

"If there is unhappiness with the corruption, the stratification of society and people understand that it is very difficult or even impossible to improve their situation, many Muslims begin to think that justice can be obtained only if secular government is replaced by the Caliphate, which functions according to Sharia law," he said.

The second reason is the result of an excessive zeal on the part of Russian law-enforcement bodies, which sometimes fight not the crimes but only some separate trends within Islam.

"When people are persecuted not because they violate a law but because they wear long beards or attend ‘the wrong’ mosque, the result is usually radicalization, even of moderate Muslims," explained Pakhomenko.

The third reason lies in the strong ties between the Caucasus Muslims and the Middle East.

"In the last two and a half decades the ties between the Middle East, Syria in particular, and the Caucasus have greatly strengthened. That is why many people in the North Caucasus take what is happening in the Middle East to heart and are attracted to radical movements," said Pakhomenko.