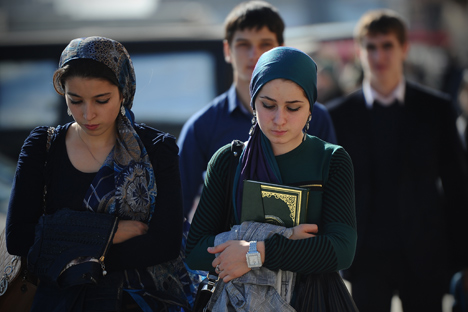 The worsening situation of women caught in a revival of orthodox Islamic traditions in Chechnya was recently highlighted when reports of an alleged forced marriage became public. As Russians wonder how norms of a secular state can be violated with impunity, the position of women is deteriorating, with Chechen leader Ramzan Kadyrov advocating “traditional” customs like ‘honour’ killings, even though these are prohibited under Russian law.

The Russian media was abuzz with reports late last month about Luiza Goylabiyeva, a 17-year-old Chechen girl who allegedly was forced to marry an already married, 46-year-old police official The incident created a furore, further aggravated by reports that the Chechen leader, Ramzan Kadyrov, had given his blessing to the “union”.

The popular outrage was compounded when Pavel Astakhov, Child Rights ombudsman, rejected appeals to interfere in the situation, by saying, “We do not defend people by force.”

The forced marriage of a minor girl drew attention to the worsening situation of women and their basic rights in some Russian republics in the North Caucasus.

Human rights activists warn that the situation is rapidly and seriously deteriorating. According to Yekaterina Sokiryanskaya from the International Crisis Group, forced marriages are a completely new phenomenon for Chechnya. “This has nothing to do with traditions. For Chechen families, forcing a woman into marriage was considered to be a disgrace. However, now, according to local activists, law-enforcement officers and officials are taking advantage of their position,” she said.

Having said that, traditional rules and ways very much hold sway in the North Caucasus, which creates additional problems for women’s rights. “Traditions are very strong there, particularly in Dagestan, Chechnya and Ingushetia,” said Sokiryanskaya. “In North Ossetia, Kabardino-Balkaria and Karachay-Cherkessia, things are not so strict. On the other hand, religion has its role to play too, since in Islam women’s rights are different from the rights set out in the Russian constitution.”

In a poll called “Gender Issues in the North Caucasus,” surveying 1,200 residents of the region, 76 percent reported violations of women’s rights. Respondents cited inequality, humiliation, discrimination in employment, infringement of personal rights and the right to self-fulfillment.

Strict controls begin with clothes. In 2008, Chechnya introduced a dress code: To enter educational establishments and state institutions, women have to wear a long skirt, a long-sleeved top and a headscarf.

“Previously, Chechen society used to be more tolerant. During the war, I walked the streets of Grozny wearing trousers and nobody paid any attention. Today too, ordinary people do not care what women are wearing. It is of much more concern for the local authorities, who are using conservatism to their own political ends,” said Sokiryanskaya.

She goes on to add that in other predominantly Muslim republics of Russia, like for example in Tatarstan, Islam is far softer and the authorities do not promote it as a state ideology. However, in Chechnya a woman can be arrested for smoking, while sex outside of marriage may result in an honor killing, the number of which is on the rise in the republic.

A man called Sultan Daurbekov is currently on trial in the Chechen capital for strangling his 38-year-old daughter after neighbors saw an unknown man giving her a lift home. She was divorced and was raising a 10-year-old son. At the trial, one of the witnesses reminded the judge that Ramzan Kadyrov had justified honor killings.

Fighting against the tide

The federal governing institutions and other organizations are unable to influence the situation. Sokiryanskaya noted that in late 2013 the then head of the Chechen division of the Russian Investigations Committee, Sergei Bobrov, tried to investigate honor killings. “However, attempts were made to put pressure on him and soon he was replaced by a more ‘understanding’ official. Russian laws apply there to a very limited degree. The main imperative for action is an order from Ramzan Kadyrov,” she said. Last year, a new ministry on North Caucasus affairs was set up in Russia. However, so far it has not made any statements on the issue of women’s rights.

Efforts to improve things are being undertaken by NGOs. “Chechnya now has an unprecedentedly large number of women’s rights organizations, six or seven. They help in resolving some issues, often doing it behind closed doors. But they cannot wage an open struggle,” said Sokiryanskaya.

“Unfortunately, there is hardly any real work being done in the region to protect women’s rights. Human rights campaigners could do their bit but, but so far everything is limited to just dealing with the consequences. Women themselves, as is evident from opinion polls, want to know more about how to protect their rights and are opposed to it,” said Saida Sirazhudinova, head of the Caucasus Peace Development center for studying global contemporary issues and regional problems.

One should not expect a surge in civic initiatives either. Russian women are not prepared to fight either for their own rights or for those of their fellow women, as was evident from a recent public discussion of a possible ban on abortions, according to Natalya Bitten, a journalist and an activist with the For Feminism initiative, who pointed out that it was only women “with higher education and a high social status” who were taking action.

Bitten said that these women have “a high personal and political potential,” are “concerned by the position of women in the North Caucasus, and they know what to do, as they appeal to the state and law-enforcement agencies,” said Bitten. However, as the incident with the Chechen wedding has shown, so far to no avail.

Help may come from past experience – in particular, from the experience of the Soviet era, when courts in divorce cases often sided with the mother. “Russian laws should protect women, including from religious rules and traditions,” said Sokiryanskaya.